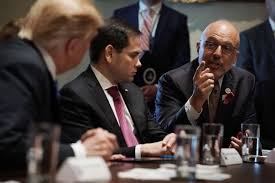 President Donald Trump said “I don’t see” the dangers of climate change that were included in a report released by his own administration. Voters in Democratic-controlled Washington state rejected a tax on carbon at the polls earlier this month. And a host of climate-minded Republicans, including Miami Rep. Carlos Curbelo, lost reelection and won’t be returning to Congress next year.

But a group of lawmakers on both sides see a politically palatable way to tax pollution: give the money collected from polluters back to every American in the form of a dividend.

That’s the big idea behind the latest piece of climate change legislation proposed by Florida Democrats Ted Deutch and Charlie Crist and Florida Republican Francis Rooney. The three House members were part of a five-member group that unveiled the Energy Innovation and Carbon Dividend Act on Wednesday, a sweeping bill that would tax carbon emissions and return the money raised by the tax to everyone.

“The goal was to craft a climate proposal that will be a huge leap forward in the way America responds to climate change,” Deutch said. “In South Florida, climate change is not a political issue. Our hope is with the introduction of the legislation that Congress shows that it can understand that as well.”

The carbon tax introduced Wednesday is unlikely to become law this Congress, because all bills that aren’t passed and signed by the president in the next month will expire. But the group of lawmakers see the bill’s introduction as a starting point for climate change discussions in the coming Congress, where Democrats will control the House while Republicans control the Senate and the White House.