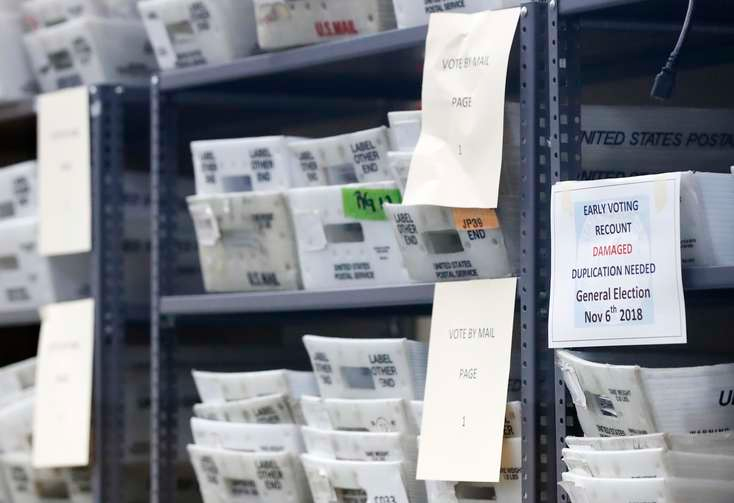 Bins filled with ballots are stacked at the Broward County Supervisor of Elections office as employees count ballots during a recount Wednesday in Lauderhill. (AP Photo/Wilfredo Lee)

The Florida Democratic Party has hired an investigator to dig into altered "cure affidavit" forms sent out to voters whose mail-in ballots had missing or non-matching signatures, according to a statement released by the party's lawyer.

"Upon receiving notice of the allegations that the form was incorrect, FDP took immediate steps, including hiring an independent investigator to review the issues at hand," read the statement by attorney Mark Herron. "As soon as we know the results of the investigation we will advise you."

The move comes after the Florida Department of State sent a letter to federal prosecutors on Nov. 9 asking them to look into the forms, which they had received from voters in four different counties. The forms, which the voters had apparently received from the Democratic party, had an incorrect deadline listed at the top for mail-in ballots to be fixed: Nov. 8, instead of the real deadline of Nov. 5.

In the letter, the department's lawyer, Bradley McVay, wrote that altering election forms is a criminal offense.

Then, the Naples Daily News reported that leaders in the party had directed staffers and volunteers to send the altered forms out to voters even after the true deadline had passed.

According to Caroline Rowland, a spokeswoman for the Democrats, the investigation is expected to be finished "shortly."