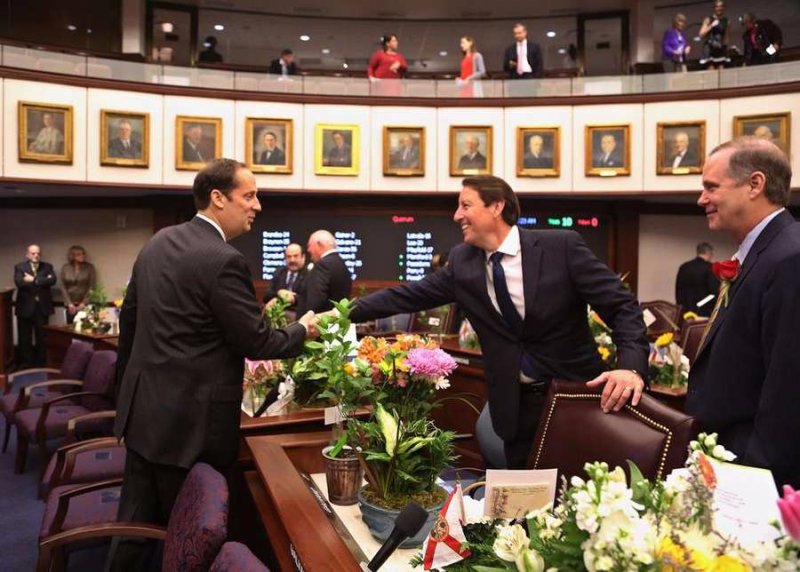 Senate President Joe Negron shakes hands with Sen. Bill Galvano during the first day of the 2017 legislative session. The two senators are leading supporters of a 2018 bill that boosts higher education, including restoring the Bright Futures scholarship to its original levels. [SCOTT KEELER | Times]

The next leader of the Florida Senate rejected the sharp political discourse that dominates America's politics, telling his fellow senators today that the chamber will be an "example" to other states and governments over the next two years.

Sen. Bill Galvano, R-Bradenton, who took over for Sen. Joe Negron, R-Stuart, on Tuesday, encouraged both sides to come together after a "vigorously fought" election cycle.

"As Senate President, I have very little ability to change the national discourse, or to stem the tide of modern-day incivility that is so pervasive in an era of social media and 24-hour news cycle," he said,  "But I can tell you as Senate president, and while I’m Senate president, that the Florida Senate will have civility, transparency, candor, and provide opportunity."

He added that the actions of his fellow senators "stand in stark contrast to much of the dialogue we are witnessing today, not just in the political process, but really, in all areas of society."

Galvano, a soft-spoken moderate who has spent 16 years in the Legislature, earned praise last year for leading the Parkland school safety bill through the Senate last year.

It was a largely bipartisan bill that included some of the first gun restrictions in Florida in decades, earning him the ire of the National Rifle Association and a $200,000 check to his political committee from the Everytown for Gun Safety Action Fund.

"Incoming Florida Senate President Bill Galvano calls himself a Republican but is rumored to be the one who colluded with anti-gun Democrats to engineer the gun control package," NRA lobbyist Marion Hammer wrote in September.

Tuesday's swearing in, with Governor-elect Ron DeSantis watching, kicked off the start of the 2019 legislative session. Over the next few months, lawmakers will begin pitching bills until March 5, when the official two-month sprint in the legislature begins.

Galvano said he couldn't predict what lawmakers would be facing next year, but he encouraged his colleagues to "think innovatively." He said that he looked forward to implementing the many constitutional amendments that were passed this year.

"Together, we can be the example for other states and world governments, as to how to focus on policy, not politics, service, not severance," he said.

"You have always been a measured thinker, very receptive to ideas, and very thoughtful and willing to listen," Gibson said.