A conversation with Andrew Gillum about Florida and 2020 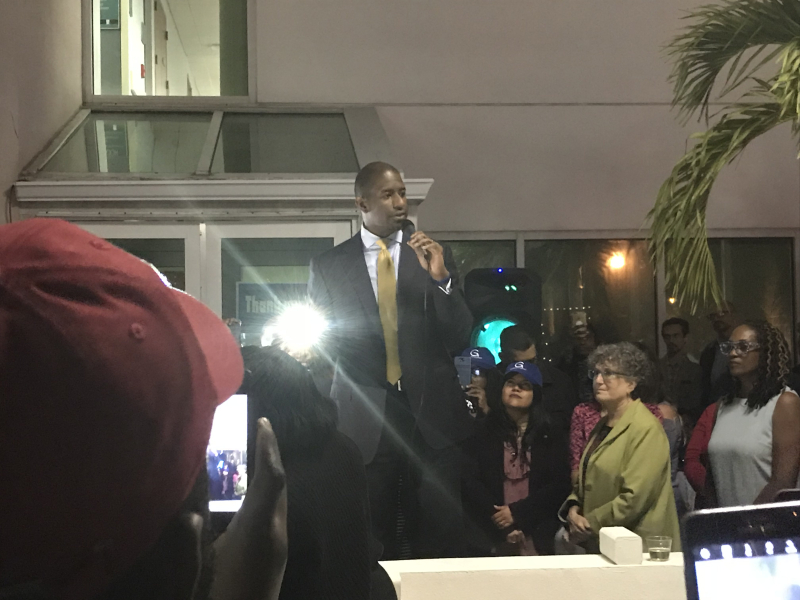 It’s a brisk Monday night in December and Andrew Gillum is standing on a small stage above a lively crowd gathered amid tiki torches on an outdoor second-floor terrace of a teachers’ union headquarters overlooking Biscayne Boulevard.

The race for Florida governor was called for Republican Ron DeSantis nearly three weeks prior following a controversial recount, but the runner-up is still campaigning. In the wake of his narrow loss, Gillum continues to tour the state and country in promotion of the progressive causes that took him “within a rounding error” of becoming the governor-elect.

He is still attracting crowds. Still courting the press. And on this night, he is in Miami sounding like a man with unfinished business.

“Let us know that we still have work to do,” Gillum says, riffing in seemingly one single breath through part of an 11-minute “thank you” speech that detoured onto education, wages, healthcare, the environment and guns. “Those challenges are still real today. They will be challenges for us tomorrow. Not one of us can take this election, put up our hands and walk away like the job is done. It’s not done for me.”

Despite losing by 33,000 votes to Republican governor-elect Ron DeSantis, Gillum’s post-script campaign is still going strong even now, a full two years after he first sat in the home of then Florida Democratic Party chairwoman Alison Tant to discuss a dark-horse run for governor.

He is, for the first time since his days in college, without a political position, having stepped down as the mayor of Tallahassee last month. And he is without a political organization to represent after giving up his longtime job with People for the American Way in order to launch his gubernatorial campaign.

But the framework of Gillum’s campaign apparatus still exists, and he still has access to a network of thousands of volunteers and staffers who helped him become a national figure for Democrats during the 2018 midterms. Meanwhile, his state political committee continues to raise small-dollar donations. And he continues to generate buzz despite grousing among some Florida Democrats who believe he might have beaten DeSantis had he run a better campaign.

Still, with the 2020 presidential contest already looming, Gillum’s name is now being floated among the dozens of Democrats who might challenge Donald Trump. A December meeting with Barack Obama in Washington and a report by the Associated Press of a Tuesday return to the nation’s capital to speak with Democratic donors have done nothing to tamp down those rumors.

Nor has Gillum, who deflects when asked if he’s considering a run.

For now, he says his only concrete plans are to continue promoting a progressive network in Florida rather than letting it atrophy and collapse. He’s also taken a once-a-week teaching gig at Harvard University’s John F. Kennedy School of Government.

“After I get a little renewal from that process, we’re going together do the work that’s required to transform the future of the state of Florida,” Gillum told the crowd Monday at the United Teachers of Dade complex, where he laid out plans to champion new election laws, engage in field organizing and help with outreach to some 1.4 million felons whose voting rights are set to be restored next month following a state constitutional amendment.

After his speech, Gillum sat down for an interview with the Miami Herald to talk about his future, his chat with Obama, and whether a presidential run is in his future.