Sen. Marco Rubio, on Senate floor, calls for pardons of the Groveland Four 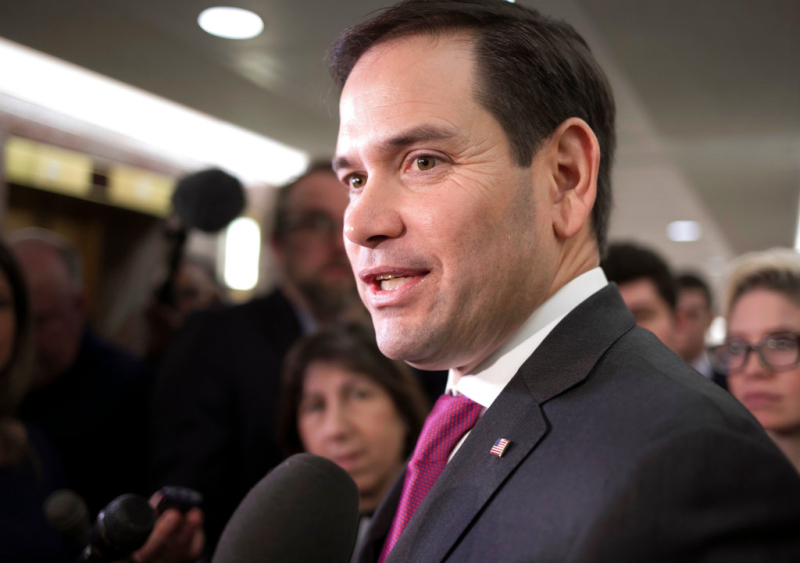 Sen. Marco Rubio, R-Fla., speaks with reporters on Capitol Hill in January. He called President Donald Trump's absence from the Summit of the Americas on Friday understandable but a nonetheless disappointing example of how Latin America often takes a backseat to more pressing national security challenges. [Associated Press]

Florida Sen. Marco Rubio took to the Senate floor on Tuesday to urge Florida's new governor and Cabinet to pardon the Groveland Four, calling their plight "a horrifying injustice."

"This is what I come here to the Senate today, to urge the new Florida Cabinet to do as soon as possible after they take office next month," Rubio said. "Because after 70 years, it is time for Florida to do the right thing for the Groveland Four."

Rubio chose to give his speech just before a Tuesday night vote in the Senate overhauling the criminal justice system. Rubio was one of just 12 senators who voted against the reforms.

The speech was also an uncomfortable welcome for Gov. Rick Scott, who will become Rubio's counterpart in the Senate next month.

Scott has chosen not to speed up the pardon process for the Groveland Four, despite an extraordinary request by the Legislature last year asking him to do just that.

None of the other three Cabinet members — Attorney General Pam Bondi, Agriculture Commissioner Adam Putnam and Chief Financial Officer Jimmy Patronis — have tried to speed up the pardon process, either.

With Scott, Bondi and Putnam set to leave office next month, calls have grown for the Cabinet members to make good on the pardons.

Incoming Agriculture Commissioner Nikki Fried, the first Democrat to win a seat on the Cabinet in 12 years, has already vowed to speed up the process at the first Cabinet meeting.

Rubio used the roughly five-minute speech to summarize why the case of the Groveland Four was so horrifying. Wrongly accused of raping a white woman, the four were either murdered, tortured or wrongly imprisoned at the hands of a Lake County Sheriff Willis McCall.

"What we can do now, as a state in Florida, is seek the forgiveness of their families and of them for the grave injustice that was committed against them," Rubio said.

You can watch Rubio's remarks here: