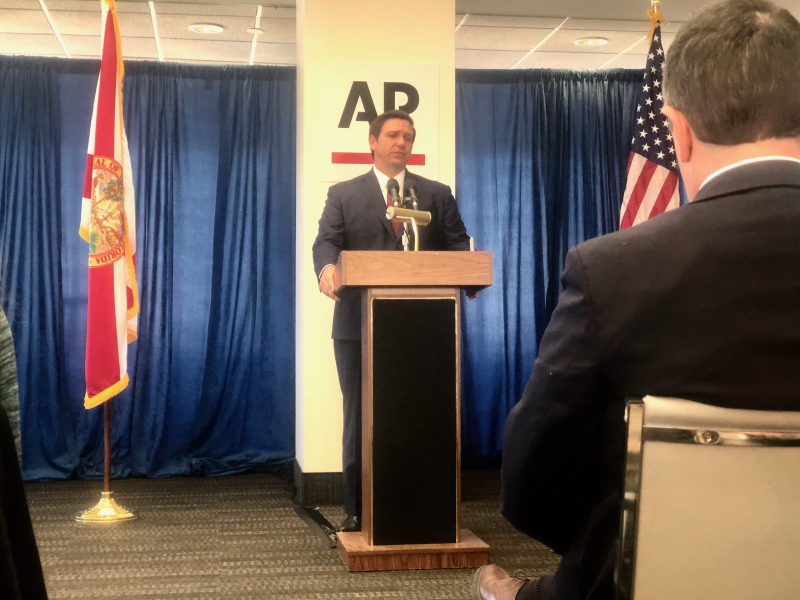 Gov. Ron DeSantis speaks to reporters on AP Day in Tallahassee on Jan. 30, 2019. ELIZABETH KOH | Times/Herald
Gov. Ron DeSantis said Wednesday that based on legal advice he’s received, he does not feel confident he can suspend Broward County Superintendent Robert Runcie, who has come under intense fire for the way his district handled the Parkland shooting and the confessed shooter, Nikolas Cruz, who was a former student of Marjory Stoneman Douglas High School.
“This came up during the campaign (and) I went back and actually looked at the statute and it seemed pretty clear to me that the statute applied to county-wide elected officials and that it didn’t apply, on its face, to appointed officials,” DeSantis told reporters at the Associated Press' annual AP Day news conference in Tallahassee. “The balance of the advice I’ve gotten since then has said that that’s probably the way to do it.”
DeSantis did say that he is looking at other “options” related to the School Board of Broward County and that he would come to a decision on that in the next two or three weeks.
“If you talk to those Parkland parents, I think they’re frustrated not just with the superintendent but also with the school board. It seems there’s something every day where someone is not being listened to or whatever,” DeSantis said. “There may be options where we can look at accountability there but it think it will be different than me saying, ‘The superintendent is out’ or whoever is out.”
Runcie did not immediately respond to a request for comment.
Andrew Pollack, the father of murdered Parkland student Meadow Pollack, said he’s hopeful that DeSantis can put pressure on Broward’s school board members to remove Runcie or face suspension from office. Pollack and several other Parkland families have repeatedly called for Runcie’s ouster, and he said the fact the board hasn’t removed Runcie yet is “despicable.”
The school board members “have to look themselves in the mirror, do the righteous thing and remove the superintendent,” Pollack said. “They should get ahead of it before they are removed ... We all know (DeSantis) will be quick to pull trigger on board members who don’t act.”
Shortly after he took office, DeSantis suspended and replaced Broward County Sheriff Scott Israel over his department’s failings during the Parkland shooting. Multiple deputies hesitated to go into the building where the shooting was taking place. Israel formally requested a hearing to contest his suspension with the Florida Senate.
At the Tallahassee event, DeSantis also said that he expects Florida to do much better in its 2020 elections than the debacles that happened with his own election in the 2018 midterms, after the triple machine recount saw blown deadlines, broken ballot machines and accusations of liberals trying to “steal” the election from former Gov. Rick Scott.
“We need to do 2020 where there’s not any type of circus after the votes are in,” DeSantis said. “They should be counted and let the victor go on to take the state of Florida.”
He said he’s evaluating potential changes to Florida election law, but thinks it’s more important that the supervisors of elections both in Broward and Palm Beach counties have been replaced because much of the state’s woes in 2018 were because of their individual problems rather than systematic failures.