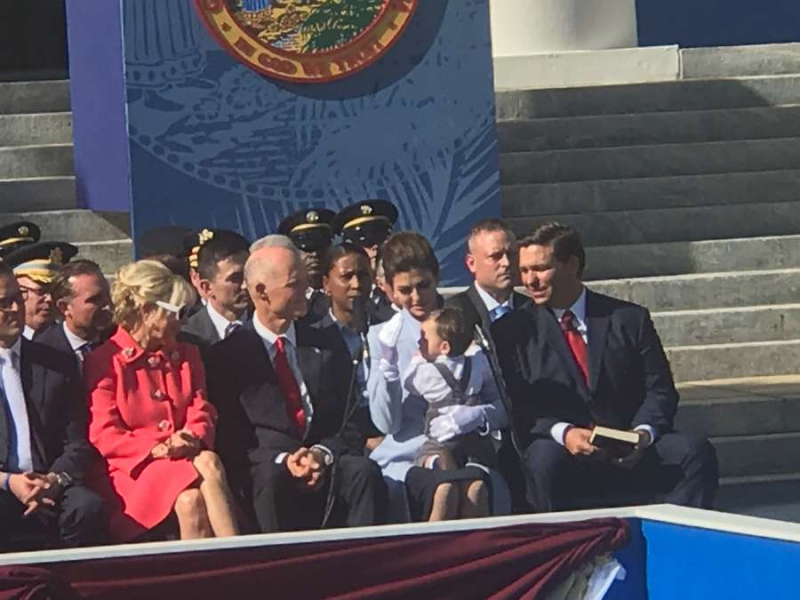 Rick Scott, right, attends the inauguration of his successor, Ron DeSantis on Tuesday, before he left early. [SCOTT KEELER | Tampa Bay Times]
Ending what had become a public feud over former Gov. Rick Scott’s last-minute appointments, Gov. Ron DeSantis on Friday retracted 46 of Scott’s picks.
DeSantis retracted all the appointments that required approval by the state Senate — in other words, all the late appointments that DeSantis had power over once he took office. Scott made 84 appointments to various boards, committees and courts on Jan. 4 and 7, against the wishes of the DeSantis team. DeSantis was sworn in Jan. 8.
READ MORE: Rick Scott made 84 last-minute appointments. That’s not going over well with Ron DeSantis.
DeSantis chose to retract the entire batch of appointments rather than a select few, following the advice of some of his advisers. So the action affects even those picks who are popular in conservative circles, such as Parkland parent Andrew Pollack, who was appointed to the State Board of Education and already had his first meeting as a board member this week.
Pollack said Friday he was unconcerned by the news and is looking forward to continuing his mission to advance school safety. He has been a strong backer of both Scott and DeSantis, so it’s likely he will remain on the board.
“I’m more concerned with where I’m going to eat tonight than if the governor is going to reappoint me,” he said. “I’m behind both of these guys ... so I’m going to let them do their thing.”
It also includes more controversial picks like developer Carlos Beruff, who was appointed to the Fish and Wildlife Conservation Commission despite facing a pending ethics complaint from when he chaired a water management district board, one of his developments being accused of illegally moving an eagle’s nest and heading up a company accused of ripping up a taxpayer-owned conservation area.
Also rescinded is the re-appointment of Thomas Grady to the State Board of Education, who is a friend and key ally of Scott’s, and four members of the Board of Governors in charge of state universities.
In a statement, DeSantis said all the appointees will have the opportunity to be re-appointed, if he chooses.
"I agree many of these individuals are outstanding citizens who are experts in their respected fields,”he said. “I thank these individuals for their willingness to serve our state. They will be afforded every consideration as my office re-opens the application process to fill these critical appointment vacancies.”
DeSantis sent a curt letter to Senate President Bill Galvano announcing his decision and listing all the affected appointees. That letter can be viewed here.