« Here are all the new offices, committees and positions Nikki Fried announced Wednesday | Main | Rick Scott says Trump should use emergency powers to pay for a border wall » 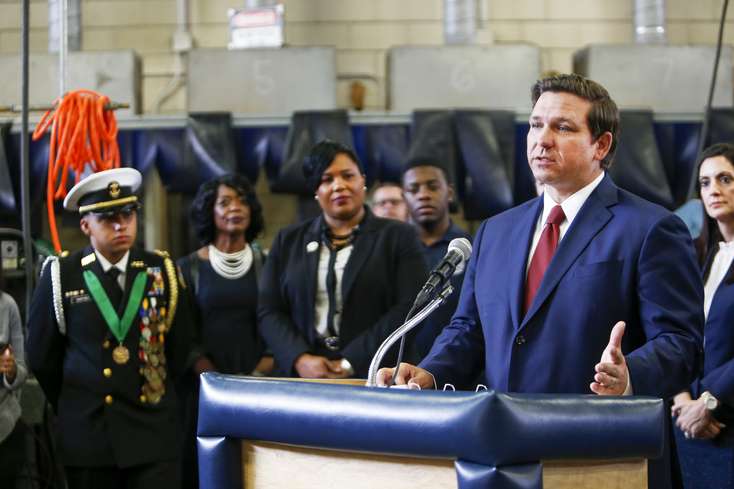 Gov. Ron DeSantis, appearing at Tampa Bay Technical High on Wednesday, announces plans to invest in Florida workforce programs. He said he wants to take Florida from 24th in the nation to first in workforce preparation. [TAILYR IRVINE | Times]
Gov. Ron DeSantis wants to create new state curriculum standards that would eliminate “the vestiges of Common Core,” he announced in Cape Coral on Thursday.
“We stuck with Common Core then we re-branded it … it’s all the same. It all needs to be looked at, it all needs to be scrutinized,” DeSantis said during the announcement at Ida S. Baker High School, flanked by commissioner of education Richard Corcoran and local school administrators.
DeSantis announced an executive order asking Corcoran to spend a year creating new state curriculum standards, which would then be presented to the Legislature for the 2020 session.
It’s true that Florida’s current standards are very similar to Common Core, even though they were tweaked and renamed in 2014. Despite criticisms of Common Core being a federal mandate, those curriculum standards were developed by private nonprofit groups and state education departments and then adopted by 45 states. Local districts then altered their lesson plans to meet those standards.
READ MORE: PolitiFact: Distortions on Common Core
But DeSantis said Common Core inspired concerns by parents who felt they were “imposed federally.”
“Also, you would have situations where the parents did not like some of the curriculum, I mean they had trouble even doing basic math to help their kids,” he said. “With Common Core a lot of people just didn’t feel like anyone was listening to them and I think that’s a big, big problem.”
DeSantis also said the new standards, which Corcoran will work to craft as long as the state Board of Education is also in agreement, should make civics education even more of a “central part” of what students learn so they can “discharge the duties of citizenship." Civics education and learning the Constitution was one of DeSantis' common refrains on the campaign trail, even though students are already required to learn the Constitution.
READ MORE: Ron DeSantis and others want to put the Constitution ‘back’ in Florida schools. It’s already there.
This was DeSantis' second education policy announcement in two days, after he made a stop in Tampa on Wednesday to propose beefing up Florida’s vocational training programs.