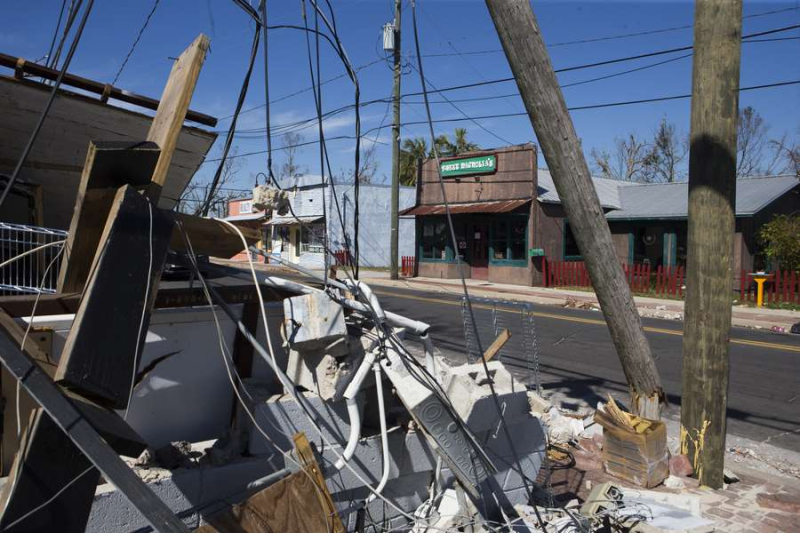 Businesses damaged in Millville, a community in Panama City, on Wednesday. Housing and Urban Development Secretary Ben Carson and Linda McMahon, the head of the U.S. Small Business Association, spoke about SBA loans and what HUD is doing in the long term to help redevelop areas impacted by Hurricane Michael. (Joshua Boucher/News Herald via AP)

Low pay for state emergency workers, costly storms and speeding up the reimbursements to cities and counties are among the top problems facing Florida's Division of Emergency Management, its chief of staff told an advisory panel to Gov.-elect Ron DeSantis Thursday.

Employees in the division make just $35,000 on average, causing them to leave for the private sector at the first opportunity, where they make an average of $85,000 "for the exact same work," Chief of Staff Kevin Guthrie said.

The pay is so poor that it's led to high turnover and the division repeatedly spending three to six months training their replacements, he said.

Guthrie's briefing to DeSantis' advisory committee on government operations painted a serious picture of the problems facing the division, and some of them are already becoming top priorities for the next Emergency Management Director. DeSantis has nominated Democratic state Rep. Jared Moskowitz for the post.

The advisory committee will issue a report with possible recommendations in the next few weeks.

Guthrie said that while 2017's Hurricane Irma caused $3.5 billion in damage to the state, he believes the costs of 2018's Michael will exceed $5 billion.

One of the reasons for the high cost was the sheer amount of debris from the Panhandle storm, which also destroyed $1.5 billion in timber.

"Michael created six to seven times the amount of debris in 10 counties as Hurricane Irma did in 45 (counties)," Guthrie said. "That’s hard to fathom, but that is what it is."

Panhandle residents are also facing "a dire shortage of affordable housing," he said, and Moskowitz has already flagged it as a concern.

"It’s going to be one of the top priorities when he comes in," Guthrie said.

During Thursday's conference call, city and county leaders also voiced their frustrations over the slow pace of disaster reimbursements. City and counties typically have to pay for recovery costs up front recovery costs, then send send an invoice to the state.

But the pace is so slow that Indian River County, for example, is still waiting on $3.5 million from the state from 2016's Hurricane Matthew, County Commissioner Peter O'Bryan said.

"It just seems like the entire process needs to be re-evaluated or expedited," O'Bryan said.

"We're in a really dangerous position going into the next hurricane season with no reserves to respond," Lindsey said, adding, "A lot of us have really come to a complete halt in terms of recovery."

Some of the problems require legislation to fix, but Moskowitz recognizes the problem and will be discussing it with DeSantis, Guthrie said.