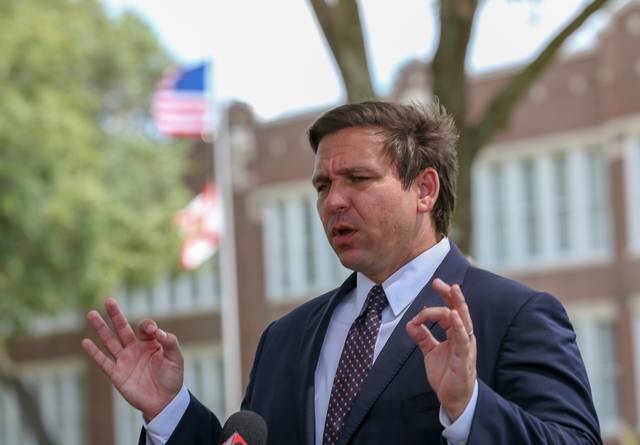 Florida Gov. Ron DeSantis warned Tuesday that Airbnb faces sanctions over its decision not to list properties in Israeli settlements in the West Bank, arguing that the policy is discriminatory and may violate a state law that prohibits Florida from doing business with companies that boycott Israel.

Florida’s State Board of Administration is preparing to present findings at the end of the month on whether the popular tourism service should be placed on a state list of scrutinized companies that boycott Israel, DeSantis said Tuesday. Administrators have not yet made a recommendation to the SBA’s board of trustees, which is composed of Florida’s governor, attorney general and chief financial officer.

DeSantis said he hopes Airbnb will make the controversy moot by reversing its position. But Florida’s new governor also made clear during a visit to the Jewish Federation of South Palm Beach County’s Boca Raton headquarters Tuesday that he believes Airbnb’s policy regarding the West Bank — which he referred to as “the Biblical heartland of Judea and Samaria” — is anti-Semitic, and said the company is dangerously close to making it onto Florida’s “hit list.”

“We have a moral obligation to oppose the Airbnb policy. It does target Jews specifically. I think that’s wrong,” said DeSantis, who declared Tuesday that state employees will no longer be reimbursed for stays at Airbnb properties while on government business. “Airbnb claims it’s a company of inclusion and yet this policy only affects Jews who have homes on the West Bank. It doesn’t appear to apply to anyone else on the face of the earth.”

In announcing in November that it would not list roughly 200 homes in Israeli settlements, the popular home-sharing platform explained that it was uncomfortable doing business in an occupied territory subject to a historical dispute between Palestinians and Israelis. Much of the world considers Israel’s West Bank settlements, built on land Israel claimed in the 1967 war, to be a violation of international law. The United Nations considers the West Bank an occupied territory.

Airbnb denied Tuesday that it is anti-Semitic, or that it has discriminated against Jews.