« Will the Groveland Four be pardoned today? Probably not, but their families are hopeful | Main | Does Gov. DeSantis believe in climate change? »

'We have people counting on that.' Gov. DeSantis weighs in on using hurricane funds for border wall 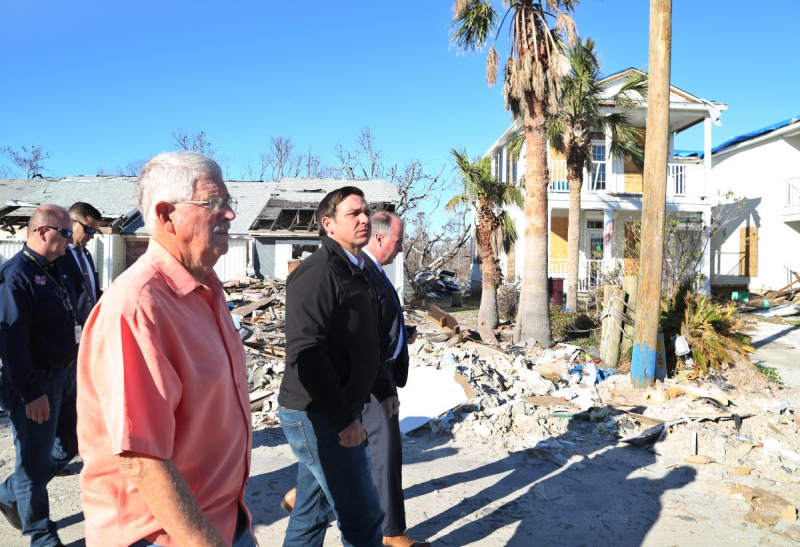 Ron DeSantis hasn't even finished his first week as Florida governor and he already appears to be on a collision course with the man who helped him get the job: President Donald Trump.

On Friday, DeSantis said that it would not be acceptable for Trump to take funds from hurricane relief to be used toward the border wall.

"We have people counting on that," he told reporters. "If they backfill it immediately after the government opens, that’s fine but I don’t want that to be where that money is not available for us."

DeSantis' comments came after news broke Thursday night that Trump, his political benefactor, was considering using disaster funding intended for storm-damaged Florida, Texas, Puerto Rico and for wildfire recovery in California to pay for the wall at the border. Trump has mentioned several times that he's considering declaring a national emergency so he can bypass the standoff with Congressional Democrats over the $5.7 billion in wall funding.

Such a Plan B for Trump would almost certainly put him at odds with DeSantis.

"In all my years in Congress we never dealt with this idea of an emergency so I just need to look at the law," he said. "My sense, just as somebody who studied the Constitution, the president wouldn’t be able to just appropriate his own money under any circumstances. You may be able to repurpose some money. I'm not sure how that works."

DeSantis added that he's not spoken to Trump about this matter, and did not say if he has plans to do so. One of the hallmarks of his campaign last year was that Florida would have a close relationship with the White House because of his political relationship with Trump, whose endorsement helped DeSantis beat a more established candidate in Adam Putnam in the GOP primary.

DeSantis' comments Friday struck a different tone than when he was asked about the shutdown on Thursday — before news broke that Florida's hurricane funding could be in sacrificed for the border wall. DeSantis said then that he has his "hands full down here," indicating he didn't want to get involved in all the "political posturing" in Washington.

DeSantis toured some of the worst of Hurricane Michael's damage in Mexico Beach on Wednesday, a trip he said was "really, really powerful." On Thursday, he announced a sweeping executive order to address toxic algae blooms aimed at cleaning up Florida's water.

But progress on both the issues of hurricane recovery and environmental cleanup have been stunted by the partial federal government shutdown, which began at midnight on December 22.

The shutdown has meant federal scientists researching Red Tide are at home instead of in their labs tracking the toxic algae as it has subsequently popped back up near the beaches of Sarasota and Manatee counties.

And as the New York Times reported, it's intensified the hardships in the Panhandle where government employees who were already struggling post-hurricane are now making due without paychecks. Meanwhile, the website for the Federal Emergency Management Agency is not being "actively managed" during the shutdown, per a disclaimer on the site, which adds: "We will not be able to respond to inquiries until after appropriations are enacted."

Editor's note: This post has been updated to include comments delivered Friday morning by DeSantis.