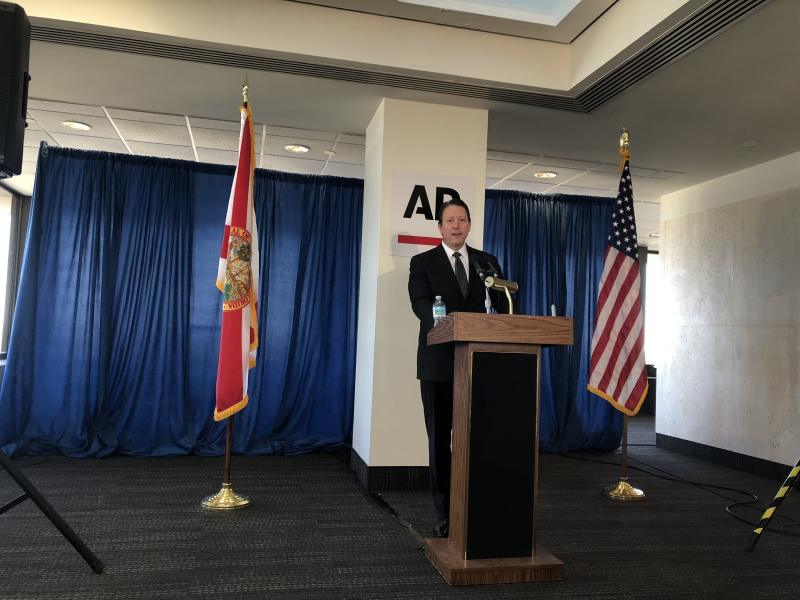 Senate President Bill Galvano outlined his top priorities and goals Wednesday, saying a key goal as the chamber’s new leader is to enhance infrastructure in rural Florida and empower senators from March 5 and beyond.

“As Senate President I have lots of discretion […] I will fulfill those duties to the best of ability but always keeping in mind the opportunities that exist when the Senators are empowered,” he said. “I’ve shared with them a vision that is important going forward in the future.”

Galvano, who created a new Committee on Infrastructure and Security this year, said much of the state's funding for infrastructure has focused on Florida's urban areas. This year, he hopes to focus on large portions of rural Florida that have suffered from impacts on farming.

The Senate President tasked the new committee's chair, Sen. Tom Lee, with expediting the construction of three new corridors in rural areas of the state. The corridors include one from Polk County to Collier County, a Suncoast Parkway extension to Georgia and a northern turnpike connector.

He highlighted the "exodus and loss" to local economies, and that the state can't solely depend on Florida's coasts to support the state.

"We need to have access to our rural communities and provide multipurpose right-of-ways so that prosperity can return there," he said.

Here are some of the other topics the Senate president addressed at the Associated Press’ Legislative Day:

Of the myriad issues coming through Senate committees, Galvano said agriculture is high on his list in considering Florida’s future, as well as addressing red tide.

The Bradenton Republican said he hopes the Senate looks toward more solutions to mitigate red tide issues plaguing animals and the tourism industry on the west coast.

One specific collaboration he mentioned was working with Mote Marine Laboratory in Sarasota as a “clearinghouse for real scientific information” to address the problem.

The Legislature is tasked with implementing Amendment 4, or the constitutional amendment that passed this fall to restores voting rights for felons who have completed their sentences and paid off any restitution.

Galvano said writing implementing legislation is not necessary, and that the legislative process should not be an obstacle for new voters who hope to take advantage of the constitutional amendment.

“I think it’s worthy of us to look and language — not implementing but supplementing language,” he said.

Two bills to reverse the smoking ban have already been filed in the Senate and Galvano said he is confident the Legislature will get something to the Governor’s desk by March 15.

Galvano said he also expects to see bills filed to address marijuana vertical integration, which requires medical marijuana companies to grow, manufacture, sell and market their own product. The system has been widely criticized from both those in the medical marijuana community and the Governor himself.

“Right now, we are with the Governor,” he said. “Smoking is the issue we are going to address first and foremost.”

When it comes to banning fracking — an item the Governor called for repeatedly during his campaign — Galvano said there are bills being drafted in his chamber, but did not expand.

“It’s an issue that will definitely come up and go through the session,” he said.

Galvano said the program created last year to arm school staff — called the “guardian” program — is something he will continue to support.

He added that there is more work to do on school safety and that he plans to take seriously recommendations from the Marjory Stoneman Douglas High School Public Safety Commission, which was created in 2018 after the fatal shooting at the high school last February.

The Senate President said this year, he hopes his chamber will make moves to regulate sports betting in the state.

Since Amendment 3 passed on the 2018 ballot, expanding gambling options in Florida now requires a statewide vote.

“It’s an activity that’s occurring but we are not collecting revenue,” he said.