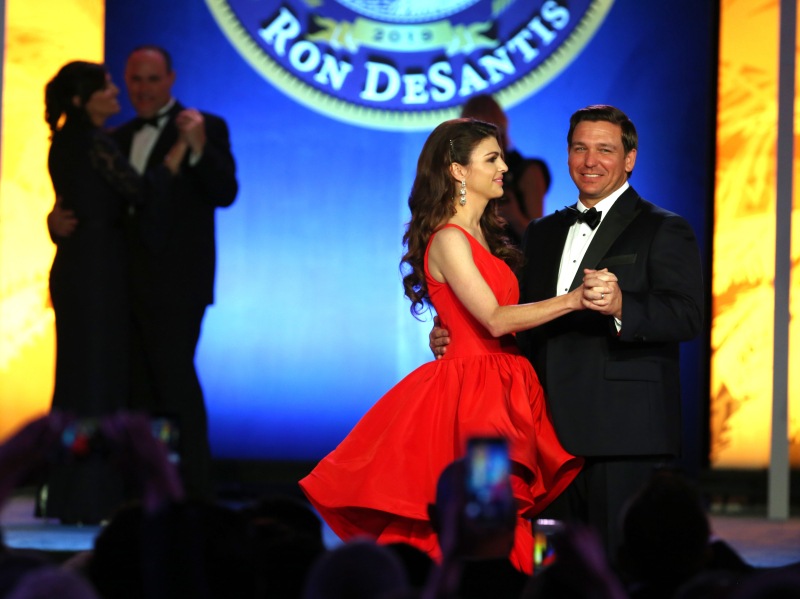 TALLAHASSEE — When Gov. Ron DeSantis took his oath on the steps of the Old Capitol in front of more than 2,000 people, then danced with the first lady to a live jazz band at the Inaugural Ball, one question lingered: Who paid for this?

Because DeSantis' inauguration fundraised through the state Republican Party, it’s impossible to separate donations used for the inaugural festivities and other party needs. But new finance reports begin to provide answers the inaugural programs, which listed sponsors but no amounts, didn’t.

U.S. Sugar donated $350,000 to the Republican Party of Florida between the midterm election and the end of 2018 – making it the No. 1 donor for that time period.

During the campaign and since his election, DeSantis has made repeated comments calling out the sugar industry as being inhibitors of toxic algae cleanup in a way that was unprecedented for a Republican candidate for governor. In one of the primary debates, DeSantis even labeled his primary opponent, Commissioner of Agriculture Adam Putnam, as the sugar industry’s “errand boy.”

When asked if U.S. Sugar’s donation went toward the governor’s inauguration, RPOF spokeswoman Yohana de la Torre responded in a statement saying donations in this time period were not “earmarked,” meaning that all the donations were deposited into the party’s account and then spent on inaugural events as needed.

Meredith Beatrice, spokeswoman for the governor’s office, also emphasized the list of expenses other than the governor’s inauguration that would have benefited from U.S. Sugar’s donation.

“The donation to which you refer was to the Republican Party of Florida general revenue fund and may be used at the discretion of the chairman and the executive committee,” she said.

Because the inauguration was paid for by the Republican Party of Florida, the same account used for the inauguration was also used to recoup legal fees from the midterm recounts and was available for any inaugural events for Chief Financial Officer Jimmy Patronis and Attorney General Ashley Moody. Patronis held a modest event at a local Tallahassee pizza parlor. Moody never released a schedule of inaugural events.

Kimberly Mitchell, executive director of the Everglades Trust, which made a surprise endorsement of DeSantis in the general election, said she is certain the donation from the sugar industry will have no effect on DeSantis’ policy.

In his first week in office, DeSantis announced a sweeping executive order aimed at cleaning up the toxic algae and also asked all the members of the South Florida Water Management District, who approved a last-minute extension to the sugar industry’s lease, to resign.

“It’s not a concern. I know Ron DeSantis and … this is not a man who can be bought,” Mitchell said. “What you’re highlighting is something that is troubling and has been for long time which is the influence and the sheer dollar amount that is doled out to politicians is obscene. They are desperately trying to do anything they can to change the tide — and they can’t.”

U.S. Sugar did not respond to multiple requests for comment.

Another top donor to the Republican Party of Florida is a health care management company, Centene, which is a parent company for others that contract with the state to provide Medicaid or health services in 61 Florida correctional facilities. Centene donated $100,000.

Yet another $100,000 donor is a mysterious Washington group called the Center for Advancement of Integrity and Justice, which listed a Washington, D.C., address on Pennsylvania Avenue and its purpose as “advocacy” in contribution reports. However, the group has no website and just registered in October 2018 as a corporation in Delaware – a state known for lax business registry requirements.

No contact information was available for the group. A receptionist for the center’s registered agent in Delaware, called the Corporation Trust Company, said they weren’t legally allowed to provide any information on their clients.

Associated Industries of Florida, a powerful lobbying group, donated just over $290,000 in their name and also through their affiliated political committees.