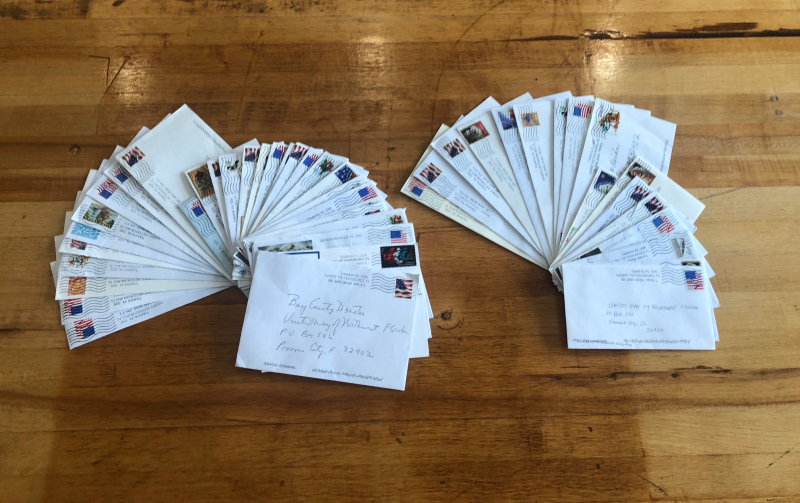 Readers of the Miami Herald and the Tampa Bay Times sent in more than 40 checks to the United Way of Northwest Florida to go toward Bay County's long term recovery group. Many of their letters referenced the story. (Courtesy of Bryan Taylor).
In the days following a Times/Herald report that donations toward Hurricane Michael recovery were severely lacking, Bryan Taylor, the president of the United Way of Northwest Florida, arrived to the post office to see the charity’s mailbox stuffed with envelopes.
“We’re so grateful for the overwhelming response,” he said.
This local chapter of the United Way manages the funds for the new Bay County Long Term Disaster Recovery Organization, which was highlighted in the Times/Herald report. That group, which is made up primarily of local nonprofit and faith leaders, is just getting off the ground to address the many issues still ahead for recovery in Bay County — home to Panama City and Mexico Beach where Michael made landfall last October.
READ THE REPORT: Hurricane Michael recovery has a big problem: People aren’t donating
In the five days following the story’s publication, Taylor said they received approximately $16,200, a massive uptick. Of that, about $7,100 came in the mail from Times/Herald readers who referenced the story in their letters, all of whom asked that the funds be designated for the Bay County group.
“I’ve been wanting to contribute to Michael recovery and this is a perfect way — having a long-term recovery organization can help a community in so many ways,” one reader wrote.
“I realize this is a drop in the bucket, but I want you to know that this donation is a direct result of the January 27th article in the Tampa Bay Times,” wrote another.
The rest of the donations came online or through United Way’s text-to-give option. A single donor in Miami gave $5,000. Most, if not all, of those gifts will also be dedicated to the Bay County group, depending on what instructions the donors gave in the online portal.
The Bay County Long Term Disaster Recovery Organization will use this money to help families in some of the hardest-hit areas to fix their homes and clear debris, Taylor said.
“I want to send our most sincere thanks to those who not only read (the) story but responded in such a generous way,” he said.
Those still wishing to give can donate online at this link, or send checks to United Way of Northwest Florida (Indicate in the check’s memo line that it is for BCLTDRO), P.O. Box 586, Panama City, FL 32402.