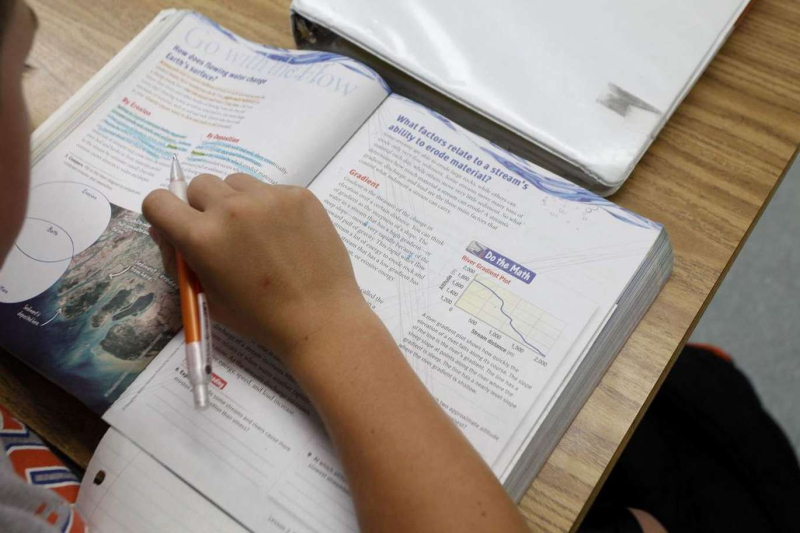 A bill filed to fulfill Gov. Ron DeSantis' campaign pitch that 80 percent of education funds be spent "in the classroom" would include student materials, like textbooks, in that calculation. [Times (2014)]
On the campaign trail, Gov. Ron DeSantis pitched the idea that 80 percent of education funding be spent “in the classroom,” claiming that there is too much wasted on administration and not enough spent on kids’ learning.
Questions have surrounded that proposal from the start, but it’s also taken its first step toward becoming law.
READ MORE: DeSantis’ education committee talks challenges of K-12 spending campaign promise, teacher pay
Sen. Manny Diaz, R-Hialeah, who chairs the Senate Education Committee, filed a bill that makes that percentage a requirement and also takes a stab at defining what “classroom” spending would include. The bill says teachers’ salaries and bonuses, classroom supplies, technology for students and tutoring would all fall into this category.
Still, even Republicans have expressed doubt that making it to the 80 percent threshold is possible, considering the costs of guidance counselors, school buses, cafeteria staff and the myriad of other expenses that are related to student success and not included in the administration.
“This is clearly a bill that is going to need a lot more work. This is a starting point and a tip of the hat to governor’s desire (to get to 80 percent),” Diaz said.
He added that the Legislature will need to work to further define “classroom” spending and may also need to completely remove from the percentage calculation some, non-classroom expenses that are deemed essential by lawmakers, such as those related to school lunches.
“Our funding system is so complex most people, even in the Legislature, don’t understand it,” Diaz said. That means it’s time to be “having that conversation and digging deep into the weeds … (to find) which one of these (expenses) was put in because it was politically viable.”