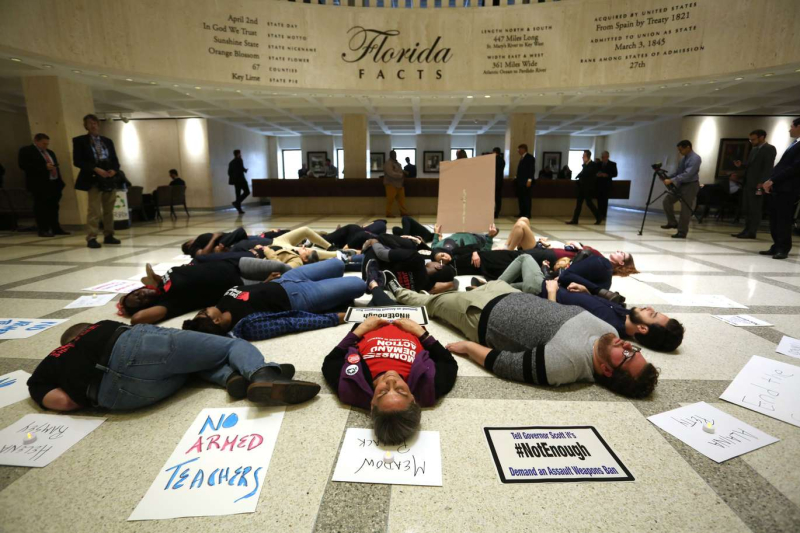 SCOTT KEELER | Times 20 protesters participate in a Die-In on the fourth floor rotunda of the Florida Capitol, 3/6/18. They continue to push for an assault weapons ban. Lawmakers in the Florida House were debating a gun/school safety bill at the time.
A bill that would allow Florida’s teachers to carry guns in schools passed its first committee along party lines Tuesday, setting up what could be one of the most heated debates of the 2019 legislative session.
Senate Bill 7030 expands the “Guardian” program created by last year’s post-Parkland bill, by which school staff can volunteer to carry guns on campus and then be screened and trained by local law enforcement. In current law, teachers that “exclusively perform classroom duties" are ineligible to participate.
But this new expansion would remove that prohibition. An amendment to once again remove teachers from the program was proposed by Sen. Lori Berman, D-Lantana, but it also failed along party lines in the Senate Education Committee.
Students “deserve to have someone ready,” said Sen. Dennis Baxley, R-Ocala during the committee meeting, shortly before he voted against Berman’s amendment. “Certainly if you’re charged with their safety we should not ask them to charge hell with a water pistol, stand there and be a victim with no way to defend yourself or others from harm.”
The committee room was packed on Tuesday as groups including the state teachers’ union and Moms Demand Action spoke against the bill, citing the many risks associated with bringing more guns on campus. There have already been instances of guns accidentally being fired or being left in school bathrooms for students to find in other states, they said.
Sen. Bill Montford, D-Tallahassee, said the state has not allowed enough time to evaluate the current success arming school staff but is charging ahead with expanding the program anyway.
"We’re at the verge of considering a monumental change in public education,” he said. "We are shifting the mission of public education from being one of teaching to being one of teaching and law enforcement.”
Montford did, however, successfully add an amendment to the bill that gives school superintendents the authority to approve or reject specific teachers who want to be armed in their districts.
The Republicans who supported the bill emphasized that this proposal is based on the recommendations of the Marjory Stoneman Douglas High School Public Safety Commission, which has spent months reviewing the footage and failings of the Parkland shooting nearly one year ago. That commission, led by Pinellas County Sheriff Bob Gualtieri, formally recommended training teachers to carry weapons in school for a quick response to school shootings.
If the teachers at Marjory Stoneman Douglas High School “had the opportunity to be ‘guardians’ they would be alive today and so would many other students,” said Sen. Kelli Stargel, R-Lakeland. “That sends chills up my spine.”
The chair of the committee, Sen. Manny Diaz of Hialeah, also pointed to the fact that many teachers who take on additional duties, such as being a “hall monitor” or “sponsoring a club” would already be eligible to carry a gun under the current law. This bill “simply just removes the piece that says they have to have an additional duty,” he said.
It was unclear Tuesday whether the bill would have any additional committee assignments. None were listed online, but Diaz speculated it could head to Senate Appropriations to determine how different pieces would be funded. If not, its next destination would be the Senate Floor. The formal legislative session does not begin until March 5 and lawmakers are only meeting in committees in the weeks leading up to that date.
In addition to allowing all teachers to be eligible to carry guns, Senate Bill 7030 also increases state oversight over districts’ compliance with the various school safety measures in last year’s post-Parkland bill. It also would require sheriffs to offer training to school staff if the school district decides to opt-in to the program.
Currently, it is optional for both the district and the local sheriff’s office, and the commission has reported that there are several districts who want to arm staff but the local sheriff’s departments won’t agree to implement the program.