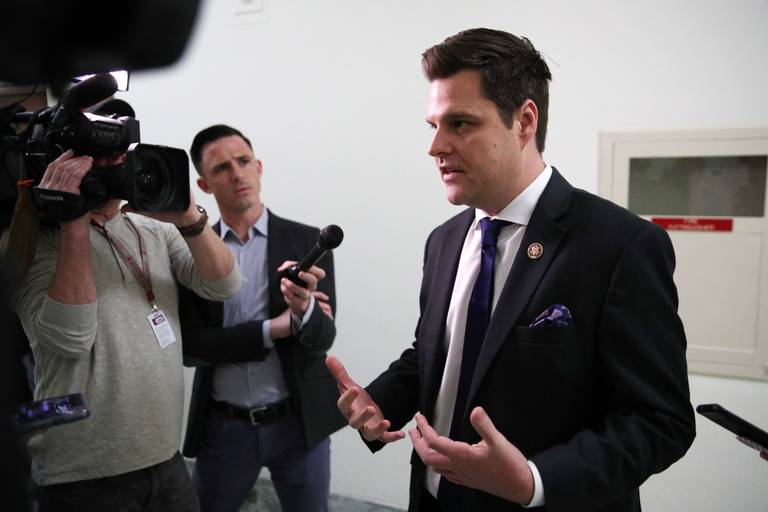 The two-term congressman from the Florida Panhandle laughed off a Florida Bar inquiry into his tweets, which claimed, the night before former Trump lawyer Michael Cohen testified in a congressional hearing, that Cohen had extramarital relations, statements that invited claims of witness intimidation.

And he also vigorously denied claims that he’s been in touch with anyone at the White House regarding Cohen’s testimony this week, after a reporter said Gaetz had a phone conversation with President Donald Trump while the president was in Vietnam negotiating with North Korean dictator Kim Jong-Un. Recent conversations between Trump and Gaetz could mean that the president is coordinating with allies to discredit Cohen.

Gaetz, who said any reporting of phone conversations with the president this week was #FakeNews, paused when asked if he spoke with anyone at the White House this week.

“Not this week,” Gaetz said. “Wait I take that back, I had an unrelated conversation about trade with someone. Nothing about Cohen or any of that.”

Gaetz is one of Trump’s biggest defenders in Congress, frequently appearing on cable television and earning Trump’s respect and trust. He later apologized for his Cohen tweet and said Thursday that he reached out to Cohen via text message.

“I told him I was sorry and I shouldn’t have mentioned his family,” Gaetz said. “He appreciated that I acknowledged that mistake on my part. He asked me to publicly ask folks to leave his family alone and I thought that was a fair request.”