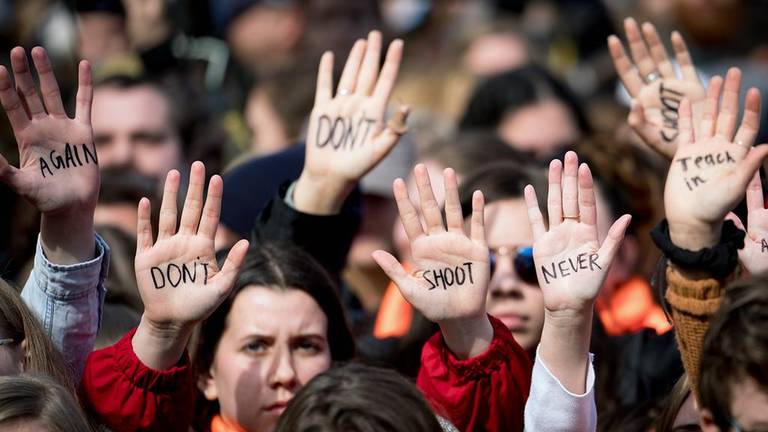 Days after the Parkland shootings just over a year ago, Fred Guttenberg and Marco Rubio met for the first time on national television.

The Republican senator, who introduced pro-gun legislation while gearing up for a 2016 presidential run, was booed by thousands in the CNN townhall audience as the father of Jaime Guttenberg, one of 17 people killed in the nation’s deadliest high school shooting, grilled him.

“Your comments this week, and those of our president, have been pathetically weak,” Guttenberg said, his voice trembling. “Look at me and tell me guns were the factor in the hunting of our kids in this school this week. And, look at me and tell me you accept it, and you will work with us to do something about guns.”

Rubio said he was supportive of laws that prevent 18- to 21-year-olds from purchasing rifles, though he wasn’t in favor of a ban on assault-style weapons. Further jeers followed when he said the National Rifle Association donates to his campaigns because they buy into his view of the Second Amendment, not the other way around.

But a year after the Marjory Stoneman Douglas High School shootings, the Republican officials who were vilified on stage have closer relationships with the families of the victims than two officials who received applause during the television town hall: suspended Broward Sheriff Scott Israel and Broward Schools Superintendent Robert Runcie. Those relationships developed away from the cameras, press conferences and viral social media posts, and are largely policy-focused, even as Rubio’s views on guns have remained unchanged despite some of the statements he made on stage that night.

“I don’t think I would have had the opportunity to meet some of them without the town hall,” Rubio said. “I’m glad I went.”

Since the shooting, Rubio said he has met at least two dozen times with five or six of the families and stayed in constant contact with them. But their conversations are very different than the exchange at that early townhall in Broward’s BB&T Center.

“Our meetings are largely about the issues that affect them,” Rubio said. “From time to time the conversation might be about another topic, but in terms of politics, when they come to DC they’re not coming to hang out, they’re coming here to get work done.”

Some of the parents are now so well connected with federal agencies they don’t need lawmakers or their staffs to set up meetings, Rubio said.

Their shared work involves issues where Rubio and the families are in agreement, like increasing funding for school safety and passing nationwide red-flag laws that make it easier for law enforcement to identify potentially dangerous individuals. Other times families come to Washington to support causes, like banning assault rifles, where they actively oppose Rubio.