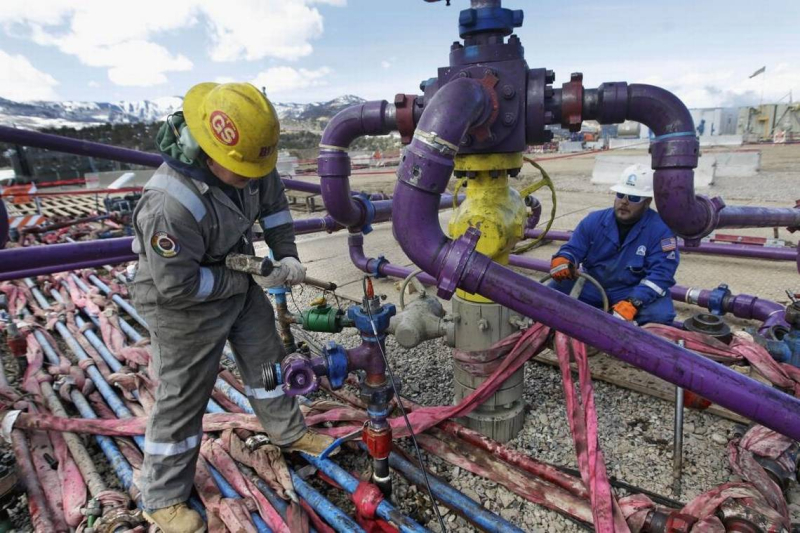 In this March 29, 2013 photo, workers tend to a well head during a hydraulic fracturing operation at an Encana Oil & Gas Inc. gas well outside Rifle, Colorado. BRENNAN LINSLEY AP

Both House and Senate committees voted positive on bills banning fracking Wednesday afternoon, but only one left those in the environmental community content.

The House bill, put forward by the Agriculture and Natural Resources Subcommittee, passed without an amendment environmentalists say was necessary in order for them to support it.

The amendment, filed by Rep. Evan Jenne, included language that defines matrix acidization as part of the definition of fracking.

Matrix acidizing is performed by pumping acidic fluids into a well at a pressure low enough to often not be considered “fracking” by definition. Operators use acid to dissolve minerals and bypass formation damage around the well.

Rep. Holly Raschein, who filed the bill, said it wasn’t her intent to “slip daylight past a rooster.”

“This is not the only time this bill is going to be heard,” the Key Largo Republican said. “Today we didn’t want to have a knee-jerk reaction. This is a very important issue, a complex issue and one that I do not take lightly.”

Gov. Ron DeSantis made fracking bans a priority this year after he unveiled sweeping measures to protect Florida's vulnerable aquifer and clean up the state's water supply.

Jenne, a Dania Beach Democrat, explained that because Florida is largely a porous plateau of limestone, matrix acidizing could be the most likely fracking technique to be used in Florida.

“This bill would work in other states due to their geology,” Jenne said. “But here, it is somewhat different.”

While Representatives discussed their proposed committee bill, Sen. Bill Montford’s bill, which included language to ban matrix acidization, passed in the other chamber.

Environmentalists cheered for the Senate bill, but showed their disappointment with Raschein’s bill, saying hers leaves an “enormous loophole” in allowing matrix acidizing.

They said if the bill is in the same shape by the time it hits the House floor, groups like Kanter — which recently won a permit to drill in the Everglades — could technically frack the already vulnerable land.

“We’re happy with what happened in the Senate, and disappointed but not overly surprised by what happened here in the House,” said David Cullen, a lobbyist for the Sierra Club. “It’s very disappointing and indicative of significant hostilities against what we are trying to accomplish which is to protect the health of Floridians and the health of our water-based economies.

Michelle Allen, the Florida organizer of the Food and Water Watch, said the bill as it stands, only deals with “half the fracking problem.”

“Matrix acidizing works by using chemicals so powerful they dissolve rock formations underground to get to oil deposits, and in doing so, exposes our water to toxic leaks,” she said. “Experts have said the cocktail of toxic chemicals known for contaminating water and endangering public health is nearly the same for matrix acidizing and hydraulic fracturing.”

Jenne said he plans to continue filing amendments as the bill moves through its next committee stops.

“We’re far from done on this,” he said. “It’s a long haul, but we’re not going to go anywhere and we are going to fight every inch of the way to make sure of that.”

Jenne added that aside from the matrix acidization loophole he would have wholeheartedly supported the bill.

“I would have jumped up and down and sung everyone’s praises in the room,” he said.