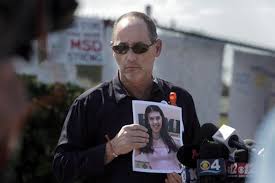 Last month, Democrats in the House of Representatives passed a plan to expand background checks on gun purchases.

“Even though ammunition is every bit as necessary for the operation of a firearm as the firearm itself, federal law does not require a background check to prevent prohibited purchasers from purchasing ammunition,” Wasserman Schultz said. “Jaime’s Law will close this ammo loophole.”

Guttenberg acknowledged that the bill’s chances of passing the Republican-controlled Senate are low, though he thinks voters in 2020 will punish Senate Republicans who refuse to vote in favor of tighter gun restrictions. As evidence, Guttenberg stood next to freshman California Rep. Mike Levin, who replaced an 18-year Republican incumbent last year.