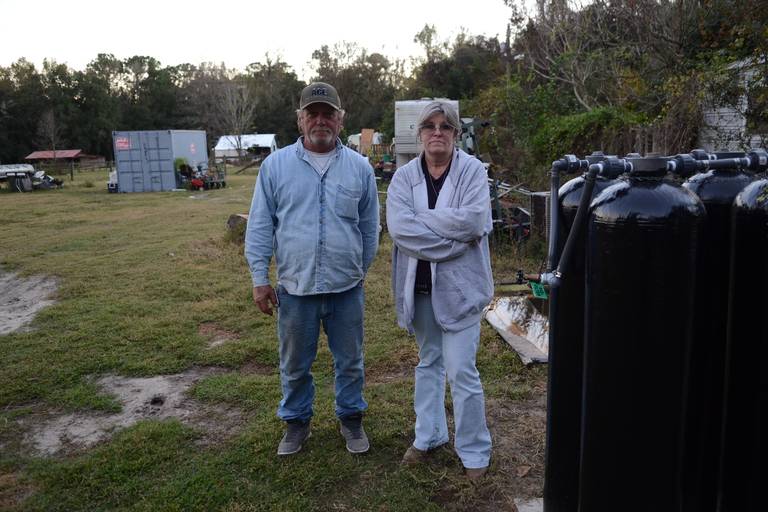 Tim and Linda Lawson stand by the well outside their Ocala home. The Lawsons, who have lived there for 33 years, were told in November that the well is contaminated with elevated levels of perfluorooctane sulfonate (PFOS) and perfluorooctanoic acid (PFOA), which early tests have suggested can be carcinogens. SAMANTHA J. GROSS SGROSS@MIAMIHERALD.COM
If you’re a Floridian with a private drinking water well and a fear of chemical contamination, it could take weeks or months for state officials to test it. Sen. Bill Montford’s bill wants to change that.

SB 1100 would not only allow anyone fearing contamination to request the Department of Health test their water source but would require samples be analyzed no more than three business days later.

Without any debate, the bill passed unanimously in the Senate Environment and Natural Resources committee Wednesday.

The Democrat from Tallahassee said he decided to file the bill after he talked to other lawmakers at a delegation meeting earlier this year.

"I heard from a lot of people that they had a concern about it," he said. "A good government response to that is to test it."

Montford’s bill follows a Herald/Times investigation that found state health officials took four months to notify well owners in Marion County they had found elevated levels of PFOS and PFOA chemicals, which are found in firefighting foams that had been used at the nearby Florida State Fire College in Ocala.

Of the 80 to 90 wells in a mile radius around the college, 16 wells were initially tested. According to emails obtained by the Herald/Times, levels of PFOS and PFOA in the water at the college were found to be between 250 and 270 parts per trillion, more than three times higher than the advisable 70 parts per trillion for drinking water.

Montford said the conversation started after he and other lawmakers read the report.

"We read that and it certainly raised all of our attention," he said. "How big of a problem do we have, and not only in this area but we need to look statewide."

While the Florida Safe Drinking Water Act establishes a water supply program implemented by the Department of Environmental Protection and DOH, private or multi-family wells are too small and are not covered by the act.

While all public water systems in Florida are required to perform routine testing, private well owners are responsible for testing the safety of their own water.

When owners and operators of private or multi-family wells request a test, DOH has to charge a fee to cover the costs of sampling and analysis. This bill would absorb some of the cost and expedite the process.