« Florida bill was aimed at banning plastic straws. Now it does the opposite. | Main | Senate committee advances bill requiring coverage for pre-existing conditions » 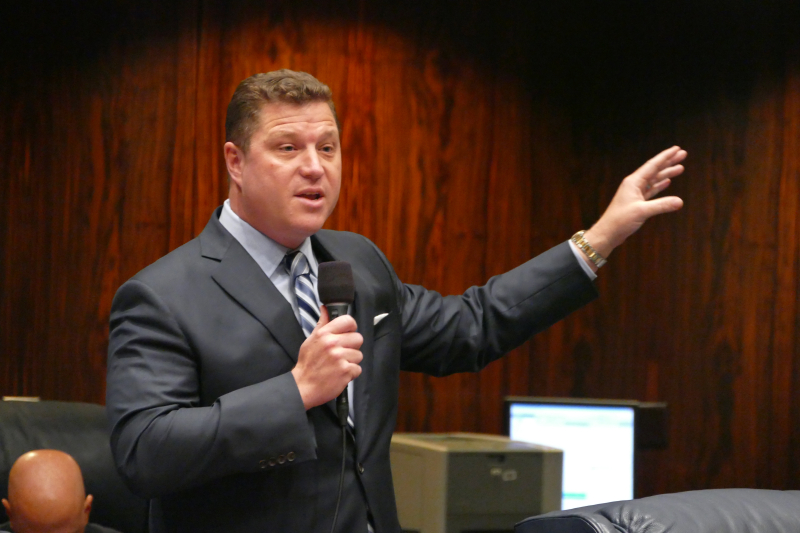 Sen. Jeff Brandes, Scott Keeler | Times
A sweeping criminal justice reform bill, dubbed the Florida First Step Act after a similar federal law, unanimously passed its first committee in the Florida Senate on Monday.
The bill is sponsored by Sen. Jeff Brandes, R-St. Petersburg, who’s been trying for years to overhaul a prison system he says focuses far too much on punishment over rehabilitation and needlessly costs the state millions. This bill, he emphasized, is only the first piece, and he wants to do more in the long run.
Historically, some Republicans, especially in the House, have been hesitant to embrace large-scale criminal justice reforms, but will sometimes be more willing to pass smaller pieces toward that end goal.
“If I could waive a magic wand I would move the state away from mandatory minimum sentences in a heartbeat,” he told the committee. “(But) we have an opportunity to put back hope in the criminal justice system.”
Some of the bill’s highlights include:
That last point was the source of concerns from civil rights groups and Democrats on the committee on Monday, who said they feared that this bill would be tied to the implementation of Amendment 4, a proposal approved by voters in November that allows most former felons to register to vote.
Sen. Randolph Bracy, D-Orlando, said he’s concerned that including restitution and court costs in this document could open the door for those pieces to also be required in order for former felons to be eligible to vote, rather than only requiring them to finish serving their time in prison.
“The committee, the Republicans, the leadership, are going to exclude as many people as possible to vote,” Bracy said. “I have a feeling this is a signal to what the (Amendment 4) implementing bill is going to look like.”
Bracy said he hopes Brandes will remove court fees and restitution from his bill, otherwise he plans to vote against it in the next committee.
Bracy, as well as the Southern Poverty Law Center, both said they are also concerned that easing mandatory minimums only for nonviolent crimes would unfairly leave out many inmates of color, who they said are more likely to be charged with violent offenses than whites.
On both the federal and the state level, criminal justice reform has typically created unusual alliances between libertarian-minded groups like the Koch-affiliated Americans for Prosperity and civil rights groups like the American Civil Liberties Union. But these new concerns from the left could endanger that for the Florida First Step Act.
But Brandes said he was willing to consider changes to the bill in order to quell those fears, and asked that lawmakers commit to this bill so he can have a launchpad to do more.
“This again, the first step, every bill after this will be the next step," he said. "We’re a long way from having the criminal justice system that I want for the state of Florida.”