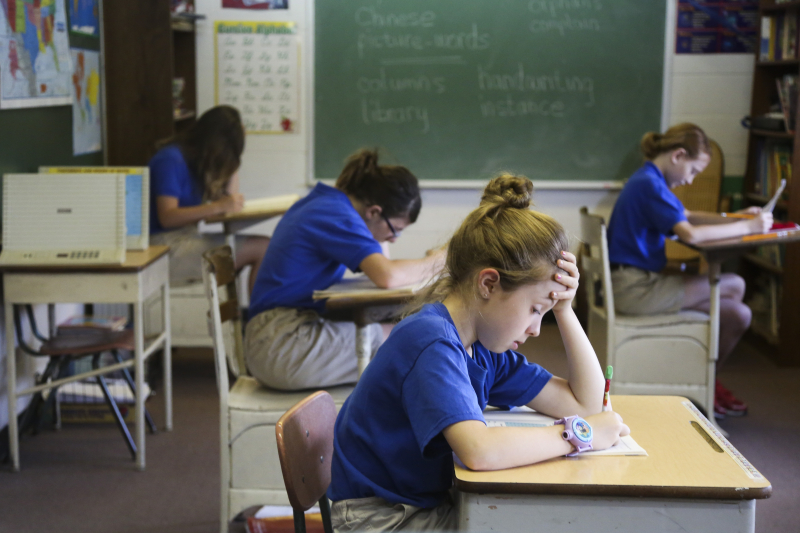 EVE EDELHEIT | Times Students work in a classroom at Brighton Preparatory School in St. Petersburg on Tuesday, May 3, 2016.
The Florida House Education committee filed a major education bill Tuesday evening that would create a new private school voucher paid for by general revenue dollars in an aggressive expansion of voucher programs much broader than what was proposed by the Senate.
Even though the Legislative session is only in its second week, already, both chambers have proposed major education packages that promise to bring heated debate over the issue of using public dollars to help families send their kids to private schools. After the Senate proposed their bill, the House companion has been eagerly awaited.
READ MORE: Florida Senate Republicans propose new voucher, changes to teacher bonus program
But, according to the bill analysis, the House version would offer 28,000 of the new vouchers, called the Family Empowerment Scholarship, for next school year. That’s about double what the Senate pitched for its first year of the program. Both plans are designed to eliminate the waiting list of about 14,000 students currently approved to receive the Florida Tax Credit Scholarship, which is offered to low-income families.
The House goes beyond that waiting list figure by offering vouchers to families that make up to 300 percent of the federal poverty line, or about $77,250 for a family of four, according to the bill analysis. That income threshold would steadily rise over time, allowing families that make up to $96,572 to participate in the 2022-2023 school year.
The Senate proposed a cutoff around $67,000 for next school year and does not raise its threshold over time.
The other major difference between the two chambers is that the House’s bill is limited only to the expansion and revision of school vouchers. Meanwhile, the Senate has consistently said they were taking a “balanced approach” to this issue by providing a package bill that creates the new voucher but also beefs up the teacher bonus program and allows districts increased flexibility to build new construction, which districts have long desired.
This House bill is scheduled to be heard for the first time on Thursday in the House Education committee.
RELATED COVERAGE: Ron DeSantis and GOP poised to redefine Florida public education