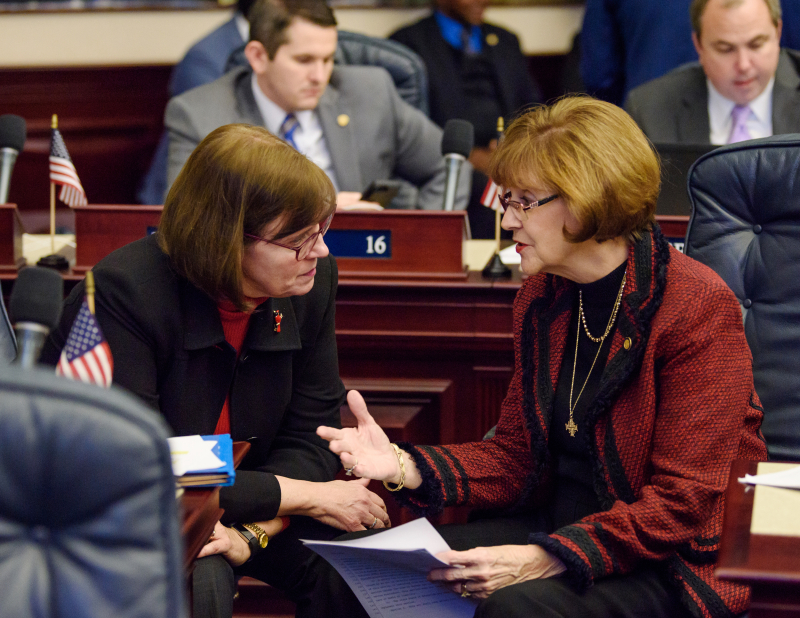 A recurring bill that would extend how long non-hospital providers can keep patients after surgical procedures cleared its first House committee stop Wednesday, along with an amendment that rolls in a second proposal allowing some of those centers to deliver babies via C-sections and with anesthesia.
The House’s Health Market Reform subcommittee voted 9-3 to advance HB 25, filed by Rep. Cyndi Stevenson, R-St. Johns, which would create recovery care centers that could care for patients up to 72 hours after surgery. The bill also extends how long ambulatory surgical centers — medical facilities that can perform same-day surgical procedures — can care for patients up to 48 hours.
The committee also voted to add two amendments, brought by Rep. Colleen Burton, R-Lakeland, which would allow those ambulatory centers to deliver babies under certain circumstances and provide more services.
The amendments mirror language in Burton’s HB 383, which would create “advanced birth centers” in the state.
The two measures are another attempt by the House in recent years to expand how long patients can spend at such medical facilities, as well as the services they can provide. They join a number of proposals — championed by House Speaker José Oliva, R-Miami Lakes — that have been filed this session and aim to increase competition among healthcare facilities in a bid to reduce prices.
Under current law, ambulatory surgical centers can currently only keep patients until midnight, though lawmakers have tried repeatedly to extend that limit. Women in Florida can also currently deliver babies at home, in a hospital or at a licensed birth center, though the latter can only keep patients up to 24 hours and cannot provide Caesarean sections or epidurals.
Stevenson told lawmakers that allowing for recovery care centers would increase access to affordable care options, and that establishing additional non-hospital centers for less intensive care would allow a “meaningful reduction” in healthcare costs. We “need to do something affordable to give people support,” she said. Burton, who presented the amendments, also cast allowing more complicated deliveries as a way to improve access to care.
Some lawmakers, including Rep. Margaret Good, D-Sarasota, raised questions about the increased time limits, which some opponents say would siphon away cases from hospitals and might increase their Medicaid loads. Good, who eventually voted against the bill, questioned what would happen after births should a patient need to exceed the 72-hour mark, citing concerns that cases that complicated might require hospital attention from the start.
Burton said agencies would determine rules regulating those centers if the bill passes and pointed to provision that require centers to arrange for ambulance transport to hospitals if patients need to be transferred during their stay.
Both Burton’s and Stevenson’s proposals have separate companions in the Senate, though a Senate bill mirroring Stevenson’s original recovery care center proposal, SB 1540, has yet to be heard in committee.
SB 434, another bill that would allow ambulatory surgical centers to hold patients overnight, cleared its first committee stop in the Senate before the official legislative session began, though its sponsor Sen. Gayle Harrell, R-Stuart, has said she expects to preserve language that would only extend stays to 24 hours. Harrell is also sponsoring a bill like Burton’s original legislation that would create advanced birth centers, which passed its first committee stop unanimously last month.
Image: Rep. Stevenson and then-Rep. Gayle Harrell, via Florida House of Representatives