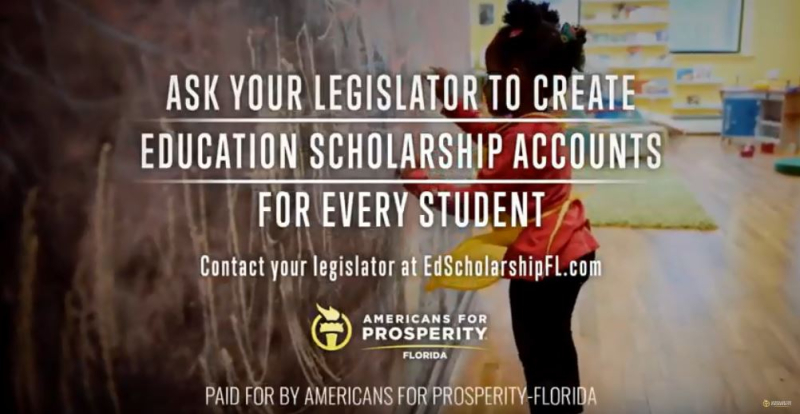 A screen grab from the ad on Youtube
The Legislative session doesn’t kick off until Tuesday but it’s already clear that the education policy debate will be different this year. With a new, conservative state Supreme Court and Gov. Ron DeSantis pushing for allowing tax dollars to subsidize students more going to private schools, many long-time education advocates have said 2019 feels like a big moment for the school choice movement.
One major advocacy group, Americans for Prosperity, which is supported by billionaire Charles Koch, launched a TV ad on Monday that will run in Tallahassee for two weeks to convince lawmakers to support universal school vouchers, also called “education savings accounts" or “education scholarship accounts.”
This policy would upend the way public school has been funded for generations. It would mean the state grants vouchers to all Florida families so they can use public money to attend school wherever they choose, whether that be a district, charter or private school, or even homeschooling.
That ambitious goal may not be accomplished this year, but the group is hoping it’s in the cards for the near future.
The ad strikes a bipartisan note, at a when when Americans for Prosperity is striving to make more alliances in both parties after years of being associated chiefly with Republicans.
The ad uses sound bytes from Former Secretary of State Condoleezza Rice, former Gov. Jeb Bush and presidents Barack Obama, Ronald Reagan, and Donald Trump all speaking generally about the need to reform education.
“Every student deserves access to educational opportunity,” the ad’s narrator says at the end of the 30-second spot. “Ask your legislator to create education scholarship accounts for every student.”
The ad’s release on Monday coincided with a “Day of Action” announced by the Florida Education Association, the statewide teachers’ union that has long been opposed to vouchers. The union said teachers and school staff would be holding rallies across the state to advocate to lawmakers to adequately fund district schools.