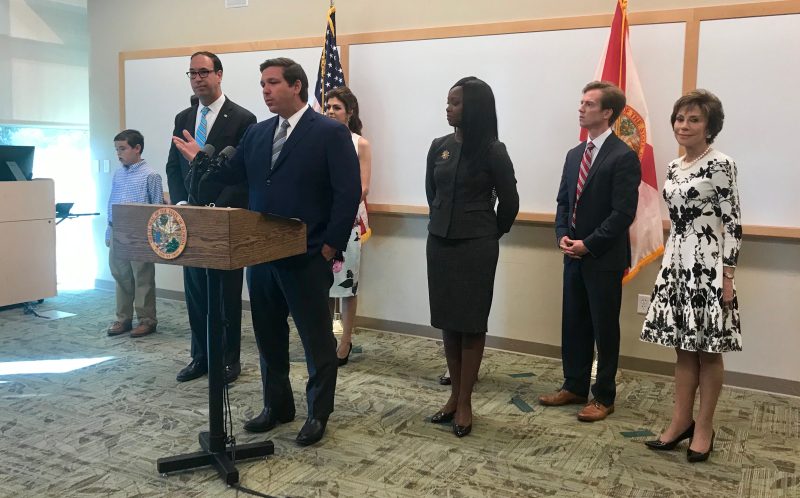 Gov. Ron DeSantis speaks to reporters flanked by two prosecutors he appointed to be judges in Tampa-area courts on Friday. Thomas Palermo, left of DeSantis, will serve on the 13th Judicial Circuit Court and Jessica Costello, right of DeSantis, was appointed to the Hillsborough County Court. Emily L. Mahoney | Times/Herald
TAMPA — Gov. Ron DeSantis appointed two new judges to Tampa-area courts on Friday, one of whom is replacing Laurel Lee, who was a judge in the 13th Judicial Circuit Court before DeSantis named her to be secretary of state.
Thomas Palermo, an assistant U.S. Attorney working as a prosecutor for the Department of Justice, will replace Lee in the circuit court, which is located in Tampa. Florida’s circuit courts handle felony cases, civil disputes of more than $15,000 and appeals from county courts.
Palermo, 43, said he was humbled to replace Lee, whom he called “a dear friend.” Lee was present at Friday’s announcement on the University of South Florida campus.
The second appointment was Jessica Costello, an assistant statewide prosecutor working in the Florida Attorney General’s office who will now serve as a judge in Hillsborough County Court.
“As a member of the Tampa community, I can’t explain how honored I am to serve,” she said. “As a local and statewide prosecutor I’ve prosecuted cases ranging from human trafficking to homicides, drug trafficking and counter terrorism matters — all with a focus on making our community safer and stronger.”
DeSantis commented that Costello, at 34, will be one of the youngest judges in the state, adding that she has “accomplished a lot in a relatively short time.”
Both appointees will serve with distinction, he said.
“As prosecutors they’ve demonstrated a commitment to serving the public, and also a commitment to being there for our victims and also supporting the rule of law.”