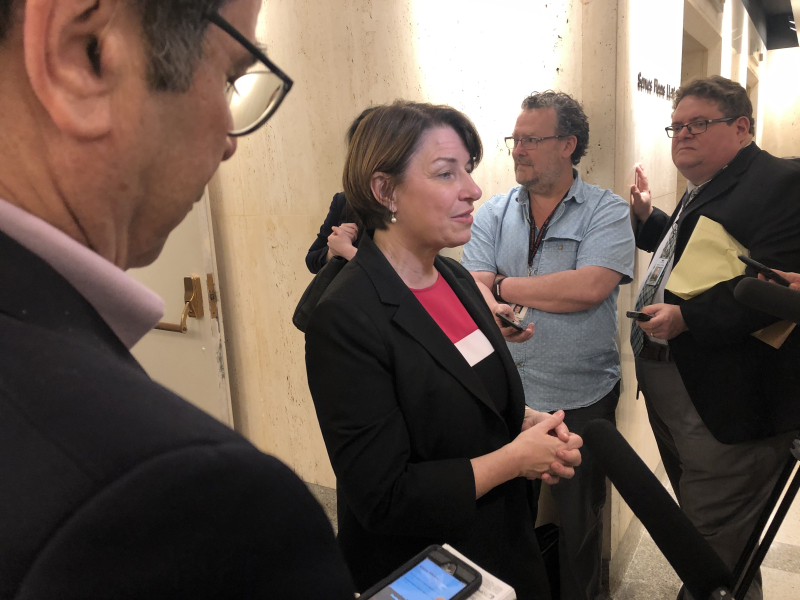 U.S. Sen. Amy Klobuchar talked climate change, hurricanes and what it will take to win Florida with Democratic lawmakers in Tallahassee on Tuesday in her first visit to gather support in the sunshine state for her 2020 presidential campaign

"A lot of the issues I'm focused on are issues that matter a lot in Florida," the Minnesota Democrat said after a closed meeting with the House Democratic Caucus.

Klobuchar said she was concerned with the effects of climate change, and pointed out that eight of 10 of the metropolitan areas destined to have the most climate change-induced flooding are in Florida.

"My idea here is to get an international climate change agreement on day one and to bring back the clean power rules and to do more when it comes to infrastructure ... certainly, you have needs here," she said.

She also answered questions regarding funding for those who were affected by Hurricane Michael in October. Klobuchar voted down on a disaster relief bill that would have awarded tens of millions of dollars to victims still waiting on funding. The bill is stalling as the Senate fights over substantial new assistance for Puerto Rico — assistance Democrats are demanding.

She is a bigger fan of the House bill, she said, and that she hopes the chambers will "work that out."

"There is no reason we can't work this out, given that the House bill had the kind of funding we'd like to see," she said. "They don't seem to want to help Puerto Rico and there's no reason we can't do all of this together. We have to get this done and we will. This is a matter of negotiations. "

Klobuchar talked about other hot topics in Florida, and commended Florida on the way student activists in Parkland have engaged more young people politically, and how voters approved Amendment 4 to restore voting rights to former felons. She said she'd never seen students from high schools in Minnesota ask such engaging questions, and that people back home have taken a new interest in restoring felon's rights.

Klobuchar added that she feels confident about winning Florida in the primaries in 2020 "despite the fact that I'm coming from a state that has a lot of snow." She said walking around Florida today she sees "a lot of people feeling left behind," and that they want a candidate who will address affordable housing and expanded access to better healthcare.

"We have to be governing from opportunity, not chaos," she said. "I don't see the other presidential candidate, which will likely be Donald Trump, addressing climate change."