« Florida is spending $200 million on affordable housing next year, most of it in Panhandle | Main | Florida Legislature finishes K-12 education budget with $248 increase per student »

Florida House passes criminal justice reform package bill. But it’s not over yet. 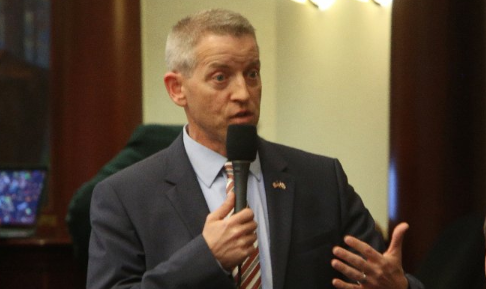 Rep. Paul Renner, R-Palm Coast, is the sponsor of the House's criminal justice reform package.
TALLAHASSEE — The Florida House passed a sweeping, 296-page criminal justice reform package on Monday with only one lone “no” vote, signaling to the Florida Senate that they are willing to come to an agreement on many issues that have long failed to cross the finish line in the Legislature.
The proposal, House Bill 7125, contains a slew of changes praised by both Democrats and Republicans, including raising Florida’s theft “threshold” — the dollar amount at which a misdemeanor theft becomes a felony — from $300 to $1,000. This would bring Florida’s amount close to the national average and adjusts for inflation since the $300 amount was set in 1986.
“We all know theft is wrong,” said Rep. Byron Donalds, R-Naples. “The question is, ‘At what point are you going to be branded a felon for the rest of your life?’ Because once you’re a felon in this system, there’s no coming back from that.”
The bill also would allow state attorneys to decide if juvenile cases should be transferred to adult court, which currently happens automatically if the crime is severe or the child has certain prior convictions. In a win for advocates for former felons’ rights, the bill would also make it easier for people with prior felony convictions to get occupational licenses for everything from barbering to auctioneering, helping people get jobs more easily after they are released from prison.
It also repeals and reduces driver’s license suspensions as a penalty for non-driving related crimes, and would give crime victims a longer period of time to file for compensation after the original crime was committed.
The only “no” vote came from Rep. Mike Hill, R-Pensacola, who said he was concerned that being more lenient on theft was not “moral."
“I don’t think we should be soft on crime, because we are not championing the rights of the individual,” he said.
There are major things the Senate has sought that the House does not have: chiefly, a piece that would give judges discretion over the sentences they hand down for certain drug trafficking crimes — under current law for example, someone caught with at least 28 grams of cocaine would face a required sentence of at least three years imprisonment and a $50,000 fine. Those required sentences are often referred to as “mandatory minimums.”
The Senate bill would also allow prison inmates to earn “gain time," through programs and good behavior, that would allow them to be released after a maximum of 65 percent of their sentence. Current law requires them to serve at least 85 percent. It’s estimated that that change alone could save the state $860 million and remove about 9,000 people from prison by 2024.
But that piece has also prompted major opposition from Gov. Ron DeSantis as well as the Florida Sheriffs Association, who have both said 65 percent is not enough.
Those major differences are still being negotiated behind the scenes, which means the House’s passage Monday was just one step in that process. The Senate is expected to amend the House bill and then send it back to the House for their final approval in the coming days.
The legislative session is scheduled to end Friday.