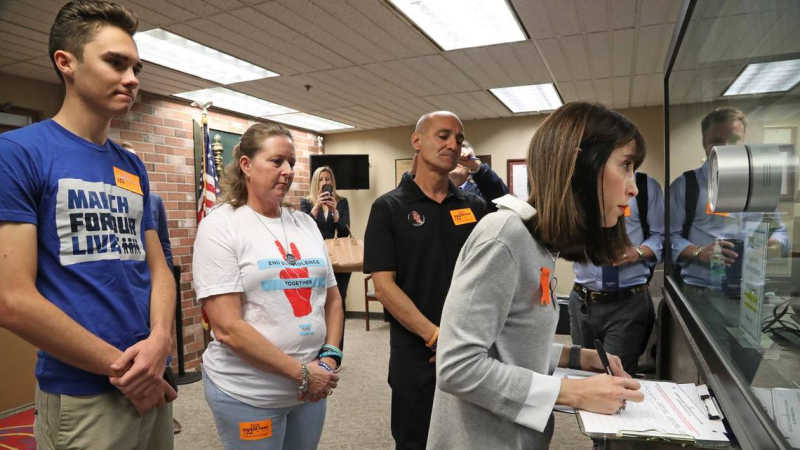 Parents of students at Marjory Stoneman Douglas High School, where a shooter killed 17 people in 2018, push petitions for 2020 ban on assault weapons in Florida. MIAMI HERALD

The effort by Republicans to complicate the citizen-initiative ballot process marches on.

A joint resolution that would up the number of votes required to approve a constitutional amendment passed its second committee meeting Monday, raising the threshold from 60 percent to 66 and two-thirds percent.

Citizens will first have to vote on the amendment, which would then be approved by a three-fifths vote in both chambers of the Legislature.

Bill sponsor Rep. Rick Roth, a Loxahatchee Republican, said the bill is a “broad base approach” to protect the state’s constitution.

“The constitution is the document that defends the least able to defend themselves,” he said, “Not the wealthy or the lawyers who have millions of dollars to have a medical marijuana bill.”

If adopted, the resolution would take effect in 2021. The Senate version of the bill, put forward by Sen. Dennis Baxley, R-Ocala, has cleared its first two committee stops.

The bills are not the first to make it more difficult to get constitutional amendments before voters this year, particularly before a crucial presidential election in which other groups hope to get before voters amendments banning assault weapons, requiring Medicaid expansion and raising Florida's minimum wage.

Another pair of bills put forward by Republicans would require, among other things, that ballot initiatives pay petitioners by wage or hour, not by signatures gathered; include the name of the initiative's sponsor on the ballot; disclose the percent of money raised by sources in-state and allow for interested parties to weigh in, and file a 50-word “position statement” either for or against the proposal to be posted on the Department of State’s website.

Lawmakers have steadily made it more difficult to amend Florida’s constitution in the past, limiting the amount of time a group has to collect signatures and raising the threshold for an amendment’s passage to its current 60 percent.

Without much power in Tallahassee over the last 20 years, progressive groups have been most successful pushing policies passed by voters who approved amendments.

Rep. Margaret Good, a Sarasota Democrat, said voters who care about topics like the environment, medical marijuana and Medicaid expansion turn to the ballot process to make change.

“Citizens have a real and effective voice in our government when it is clear that our legislature is not adequately addressing issues that are important to our citizens,” Good said. “This is, right now, the only answer that citizens have to this very, very broken process. Raising the bar is quashing the voice of the voters and the citizens of this state.”

The signature-focused bills would affect two major amendments that could appear on the 2020 ballot, one raising the minimum wage and the other allowing “energy choice,” advocates for those ideas say.

Alex Patton, chairman of a committee trying to get an energy-choice amendment initiative on the ballot, said that the bill makes it “obvious: that “the powers that be do not like citizens speaking up them.”

“In almost all cases, it’s impossible to get two-thirds of the state of Florida to agree on anything,” Patton said. “It’s going to kill ballot initiatives.”