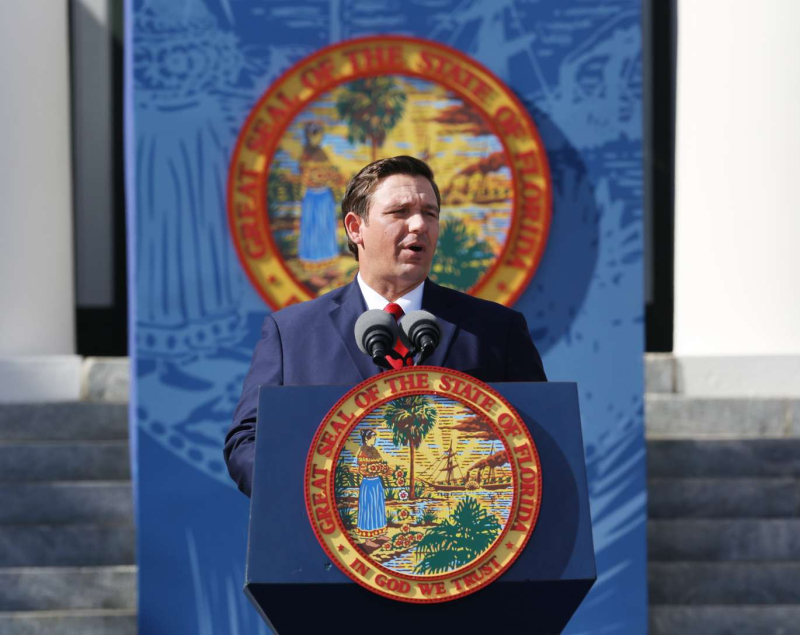 SCOTT KEELER | Times Florida's 46th Governor Ron DeSantis addresses the crowd, Tuesday, January 8, in front of Florida's Old Capitol during his inauguration.
DeSantis had a lot of job vacancies to fill after he rescinded scores of last-minute appointments made by his predecessor, now-U.S. Sen. Rick Scott, shortly after taking office in January.
He filled several Friday, including naming Kent Stermon, a longtime friend and campaign donor of DeSantis', to the Board of Governors, which oversees the state’s public universities.
Stermon is the chief operating officer of Total Military Management, a company that contracts with the federal government to relocate military members. Stermon, along with the CEO of the same company, rented a condo to DeSantis when he was in Congress — prompting an ethics complaint. The complaint was never resolved because it did not rise to the level of an investigation
before DeSantis resigned from Congress to run for governor, though his spokesman has said that DeSantis paid up front and above market value for the condo.
It’s not unusual for a governor to appoint corporate executive-types to the Board of Governors. The chancellor of the board, Marshall Criser, is the former president of AT&T Florida, for example. The board members are not paid.
But Stermon has drawn increased attention throughout DeSantis’ rise to power because of the ethics complaint. Stermon also served as DeSantis’ Northeast Florida chair during the campaign and was appointed to one of DeSantis’ policy advisory committees during the transition. Stermon previously told the Times/Herald that he met DeSantis nearly 10 years ago in Jacksonville through mutual friends and that DeSantis has requested his help along the way because he trusts his friend “to do it right.”
Also named to the Board of Governors was Eric Silagy the president and CEO of Florida Power and Light Company, the state’s top utility.
The company has long been considered one of the most influential special interests in the state which donates millions to political campaigns each year.
DeSantis, in the statement announcing the appointments, said that the corporate leaders understand the value of education from a workforce perspective.
“Human capital is our greatest strength to ensure the success of our economic future and Florida’s universities lead the way in shaping that success,” he said. “These individuals have demonstrated a strong commitment to public service and the economic growth of our state."
The third appointee was Steven Scott, the chairman of Scott Holdings, LLC, a medical investment company, who previously served as a trustee for the University of Florida. Earlier last week, DeSantis also appointed Brian D. Lamb, chairman of the University of South Florida’s board of trustees, to the Board of Governors.