« Are the 'sanctuary city' bills dead in the FL Legislature? | Main | School referendum funding bill heads to Florida House floor with some changes » 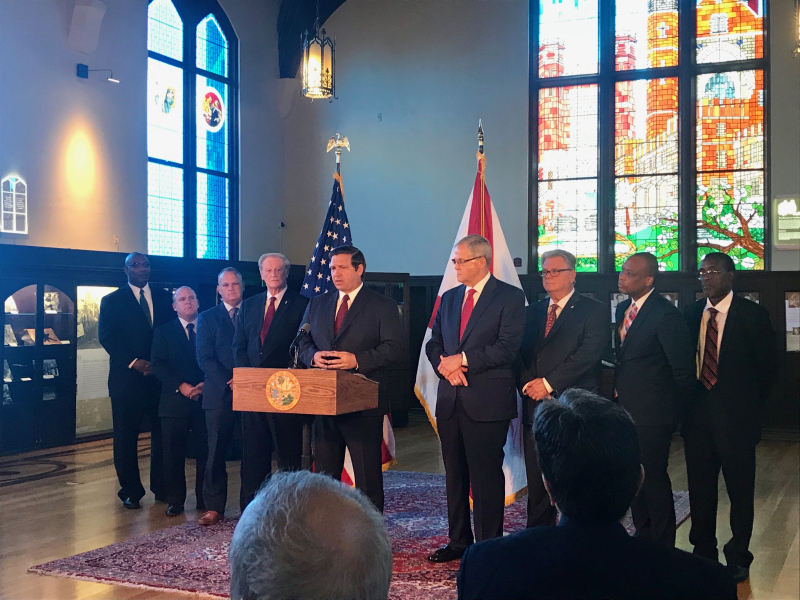 Gov. Ron DeSantis speaks at Dodd Hall on Florida State University's campus on April 15, 2019. He said Florida's colleges and universities should adopt a specific free speech policy that allows for more "intellectual diversity." Emily L. Mahoney |Times/Herald
Gov. Ron DeSantis said all of Florida’s colleges and universities should adopt a resolution similar to the “Chicago statement,” a statement on campus free speech that declares that all viewpoints should be allowed to be discussed on college campuses, even if they are ones students may “loathe” or find “deeply offensive.”
“We are here today to affirm our commitment to ensuring that all Florida’s public universities and colleges and protect student speech and the open exchange of ideas on our campuses,” DeSantis said during a Monday news conference at Florida State University, flanked by the university’s president, John Thrasher, Florida Commissioner of Education Richard Corcoran and Marshall Criser, chancellor of the state’s university system.
Scores of colleges and universities across the country have already adopted a version of this resolution, including Eckerd College, a liberal arts school in St. Petersburg. According to the governor’s office, all the state’s other colleges and universities are plan to adopt the Chicago statement.
Notably, DeSantis addressed the topic of controversial speakers — an issue with which Florida is deeply familiar, after white nationalist Richard Spencer spoke at the University of Florida in October 2017 and had to cut his speech short after students in the audience drowned him out with chants like “Black Lives Matter.”
“At an academic institution where you have a speaker expressing ideas, there’s no room for a heckler’s veto where you simply shout down or scream down a speaker so that they cannot articulate views,” DeSantis said, later adding that in Spencer’s case, the “best response” by students would have been “an empty auditorium.”
He added that he’s noticed “a trend” nationwide where universities have dis-invited certain speakers that espouse controversial opinions, such as conservative pundit Ben Shapiro, who has said that the majority of Muslims have been “radicalized” and tweeted “Israelis like to build. Arabs like to bomb crap and live in open sewage.”
“I think that’s a sign of weakness on behalf of school administrators and I think that demonstrates a lack of commitment to free exchange of ideas," DeSantis said. "There can’t be a safe space in the business world.”
Experts in campus free speech emphasized that the Chicago statement doesn’t have teeth, though it can be a positive first step in affirming institution’s commitment to free speech regardless of the speech’s content.
“It’s unequivocally a positive step in the right direction for a public institution to affirm this is what they think about these issues,” said Joe Cohn, legislative and policy director for the Foundation for Individual Rights in Education, which has done policy and legal work on behalf of students whose speech rights were infringed upon on campus.
“But they (universities) also need to do the hard work of comparing their policies to the principles reflected in the statement.”
But Jonathan Friedman, the campus free speech project director for PEN America, a national group of writers and human rights advocates which has published a report on campus free speech, says that universities should not feel pressure to remain neutral on all issues in an effort to have open speech.
“Having a conversation about free speech alone ... without discussing the tensions that exist can inflame other issues like racism and hateful speech on campus,” Friedman said. “If there’s someone on campus promoting hate … we would want the university to be able to say, ‘We don’t agree with this person and here are all the reasons why.’”
The announcement came at a time when bills are moving through the Florida Legislature (Senate Bill 1296 and House Bill 839) that would require each of the state’s public universities, to conduct an annual “assessment” looking at “intellectual freedom and viewpoint diversity at that institution.”
The bill’s sponsor, Rep. Ray Rodrigues, R-Estero, has pointed to a University of Colorado survey as the inspiration for the proposal, which polled students and faculty on whether they felt the school promoted an environment respectful of all people of all identities and opinions. As part of that survey, students and faculty were also asked to anonymously identify their race, ethnicity, religious affiliation, sexual orientation and political party.
And just last month, President Donald Trump issued a broad executive order on the topic of university free speech, asking federal agencies to make sure that colleges or universities that receive federal grants “promote free inquiry." If not, those grants could be at risk.
When signing the order, Trump said “professors and power structures” are keeping students from “challenging rigid far-left ideology.”
DeSantis said on Monday that he agrees that university faculty tend to lean leftward, though he said that should not matter.
“I’ve had liberal professors over the years who were very fair about putting forward the alternative viewpoints," he said.
Both Cohn and Friedman said it’s very important that elected leaders don’t politicize discussions surrounding the First Amendment.
“Whats really important is that we avoid the hypocrisy emanating around the Trump administration where Trump himself ... calls for journalists, for people who disagree with him to be punished,” Friedman said. “It’s really important that universities help students and others to start to see free expression as allied to causes of diversity and inclusion rather than in tension with them.”