School districts, charters, sheriffs. Who decides if teachers can be armed? 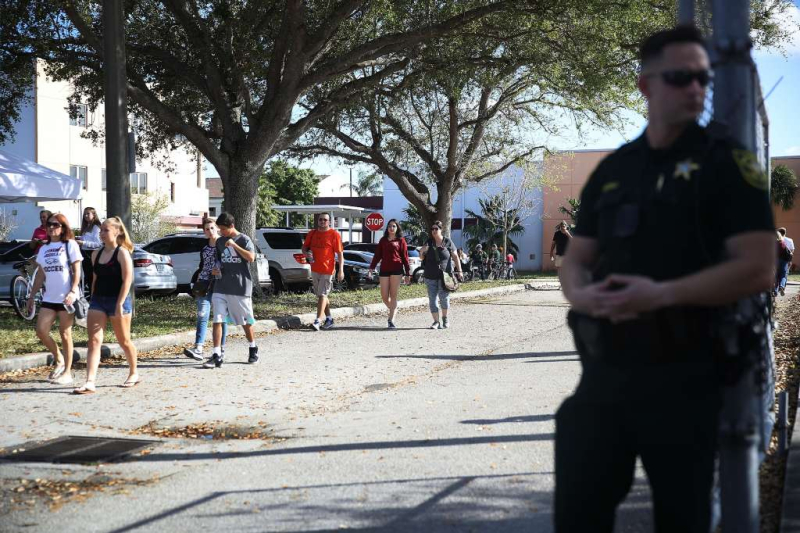 PARKLAND, FL - FEBRUARY 25: People visit Marjory Stoneman Douglas High School on February 25, 2018 in Parkland, Florida. (Photo by Joe Raedle/Getty Images)
The Florida Senate didn’t have a formal vote on the bill that would allow classroom teachers to be armed on Wednesday, but they did adopt a major amendment that could settle one of the biggest lingering questions of the debate: who gets to decide if teachers in a school can be armed?
Under current law, passed last year as part of the fallout from the shooting in Parkland that left 17 students and staff dead, both a school district and their county’s sheriff must agree to offer the “Guardian program” before teachers can carry guns on campus. The sheriff’s office is then charged with offering teachers and other personnel with the proper training and psychological screening. Some districts have opted to hire security staff whose only role is to be armed protection.
But under Wednesday’s amendment to the bill, sheriff’s offices would be required to offer that training if school districts requests it, though that sheriff may contract with another sheriff to provide it instead. Additionally, if a district decides not to participate in the program but a charter school disagrees, they can ask their county’s sheriff to offer the training to their staff anyway.
“There have been discussions with the House to try to get these bills lined up," said Senate President Bill Galvano, R-Bradenton. “It’s a genuine issue regarding who is making the decisions and who is calling the shots and we didn’t want to have one school speaking for the whole district.”
But there’s an additional curveball: if a charter school wishes to arm their staff and the sheriff refuses, they can also ask a sheriff outside their county to provide the training instead.
“If the (Broward County) school board does not want it, and they’ve been adamant about that, so if a charter school decides they do want it it’s going to be a problem,” Sen. Perry Thurston, D-Lauderhill, said.
The new version of the bill clarifies that the district and charter schools have a joint responsibility to ensure all charter schools have armed security, which is required by law on every campus.
The question was the subject of a lawsuit in Palm Beach County, where an administrative law judge ruled that the school board there must assign school security to charter schools. Charter schools are public schools that are operated by private entities.
Final votes on the school safety bills, Senate Bill 7030 and House Bill 7093, are expected in both chambers in the coming days.