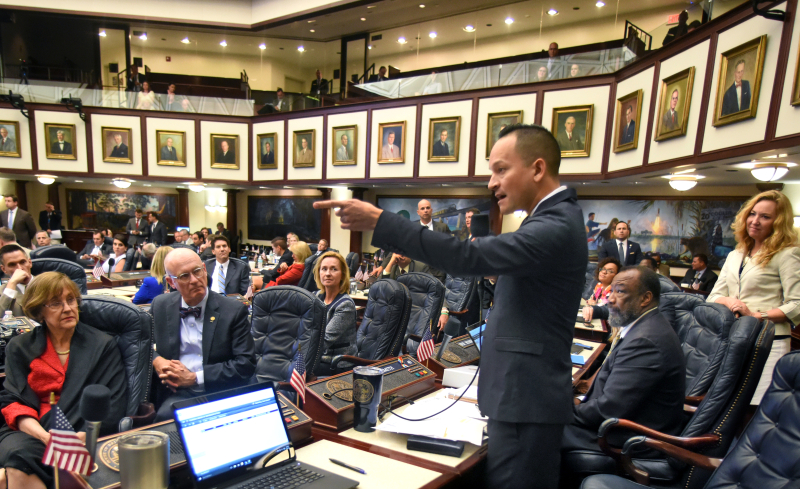 The clock neared midnight Tuesday as Representatives in the Florida House debated at length over an amendment to a larger healthcare bill that would put a proposed cap on THC for smokable medical marijuana.

House Democrats asked amendment sponsor Rep. Ray Rodrigues a series of questions related to the affordability of medical cannabis, potential for litigation and the issue of patients turning to the black market to treat their ailments with stronger marijuana.

But at 11:50 p.m. the bill was temporarily postponed before the main debate on the bill even began. House Speaker José Oliva then told the chamber they'd be taking up SB 168, or the Senate's version of a bill to ban so-called "sanctuary cities" in Florida.

"I hope that we can get through this before it’s time to be back in here tomorrow morning," the Miami Lakes Republican said.

Because the bill was taken up before midnight, the Democrats said they fell 10 minutes short of killing the contentious bill, as House rules maintain that a bill cannot be heard twice in one day. If the bill were to be taken up twice, session would have to "gavel out" and then "gavel back in" for a new floor session, according to House spokesman Fred Piccolo.

Rep. Carlos Guillermo Smith, who pushed back against THC caps when it came up in Health and Human Services Committee, said he thought the Democrats would have been able to stop the bill if they continued the questions past midnight.

'Hard-line immigration laws will have a terrible impact on our state. I had a chance to kill the bill by running out the clock, so I went for it," the Orlando Democrat said. "It almost worked. I like cannabis almost [as much] as I like to talk so it was a win-win."

"As the minority caucus in the Florida House, our options in stopping dangerous bills are limited," said Rep. Anna Eskamani, D-Orlando. "I am proud of our caucus for leaving nothing on the table when it comes to respecting the rule of law and pushing back against anti-immigrant legislation.”

Critics say his version is harsher than the Senate version, as it builds in a rule that local government employees or elected officials who permit sanctuary-city policies may be suspended or removed from office. It also includes fines of up to $5,000 for each day that a sanctuary-city policy is in place, an “anonymous complaint’ web portal through the attorney general for any person to submit an alleged violation of the policy and the threat of removal of state grant funding for entities with so-called “sanctuary policies

The House has put forward a similar bill over the past few years, but it has always died in the Senate.

If the new, House-like version of the Senate bill passes, it will be sent over to the Senate for one last vote. Only after they vote to approve the bill can it be sent for signing by Gov. Ron DeSantis, who has pushed the proposal as one of his most hardline Republican campaign promises.