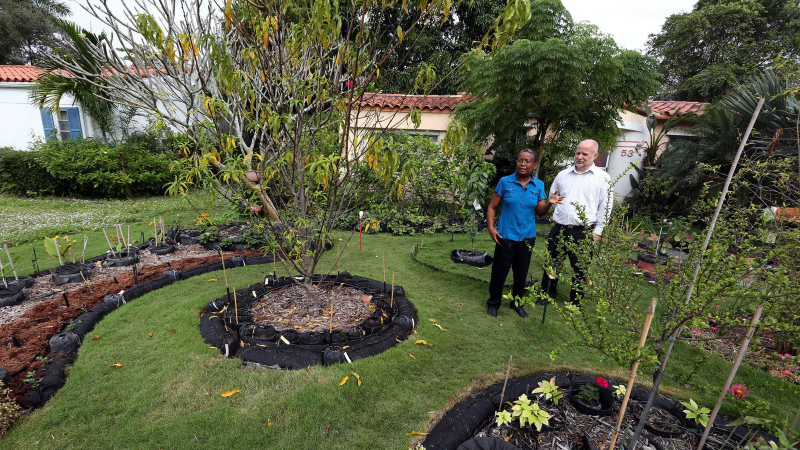 The Miami Shores front-yard vegetable garden, as seen in 2013, that created a dispute leading to this year's legislation that would prevent local governments from regulating locations of such gardens (Walter Michot / Miami Herald file)

A bill that will ban local governments from regulating vegetable gardens — and herb, fruit and flower gardens — is headed to the governor’s desk.

The House bill, which passed 93-16 on Wednesday, prohibits local governments from regulating vegetable gardens on residential property and voids any existing ordinances or regulations that tell people where they can and can’t grow their own produce.

An identical Senate version passed 35-5 out of the chamber last week.

The conversation surrounding vegetable gardens is rooted in a legal dispute about an ordinance in Miami Shores that banned the gardens from being planted in front yards. Hermine Ricketts and Tom Carroll, who ate from their vegetable garden for 17 years, sued the village after they faced $50 in daily fines after the village amended its ordinance in 2013. They had to dig up their garden — which can’t grow in their backyard because of a lack of sun. Gone were their tomatoes, beets, scallions, spinach, kale and multiple varieties of Asian cabbage to boot.

In November 2017, an appeals court upheld a ruling that the couple does not have a constitutional right to grow vegetables in their front yard. They appealed the ruling to the Florida Supreme Court, which declined to grant review.

The main opponent to both vegetable garden bills has been the Florida League of Cities, who have argued that the unique aesthetic of Florida’s cities are brought about through code enforcement. They also argued against the idea of preemption, which would undo rules like a 2013 Orlando ordinance that allows residents to use 60 percent of their front yard as a vegetable garden.

While other concerns over too much preemption came up in committee, the bill specifies that the language does not apply to other regulations like limits on water use during droughts, regulated fertilizer use or the control of invasive species.

“This bill should not be viewed as an attack on home rule, but rather a defense of our most basic rights as Floridians," said House bill sponsor Rep. Elizabeth Fetterhoff, R-Deland. "Whether it’s a hobby or a way for a cash strapped family to save money without sacrificing their nutrition, government at any level has no business telling Floridians that they cannot grow their own food because of where they live.”

The Senate passed a similar bill during the 2018 session, but the clock ran out and it never got a House companion.

Rickets said she is relieved that she can finally regrow her garden, which she leaned on as a hobby and source of nourishment.

“After almost six years of fighting, I am relieved that my right to grow my own garden, on my own property, is finally going to be protected,” Ricketts said. “Once it was taken from me, my health suffered severely. I am looking forward to the time that I can once again grow my own food, for my own consumption, without having to worry that an overzealous code enforcement officer will try to fine me into destitution.”

Ari Bargil, who represented Ricketts and Carroll, said he was happy to hear that the Legislature understood the importance of the family's case.

“This bill eliminates the ability of local governments to enact senseless laws targeting basic acts of self-sufficiency under the pretense of ‘aesthetics,’” said attorney Ari Bargil, who represented the Miami Shores family. “By signing this bill, the governor will reaffirm that Florida is a state that respects both basic property rights and constitutionally protected civil liberties."