"Hillary is the passionate and driven champion that we need for women, children, and everyday Americans," Sink wrote in brief email."My good friends are hosting three conversations with Hillary and her campaign team, and I'd like to personally invite you to consider attending one of the three."

The email says it was paid for by Sink's 2014 congressional campaign.

All three fundraisers ask for a minimum contribution of $2,700 per person, with $27,000 required to "host" one of the receptions in Miami Beach, Fort Lauderdale or North Palm Beach.

But not by much.

Aggregate and average out the polls taken in the Pinellas County seat since late January, when absentee ballots were sent out, and Sink edges Republican David Jolly by as little as 0.63 percentage points to almost 4 percentage points, depending on how you slice the data.

Still, it’s early. There's one week left. Much will happen and change. 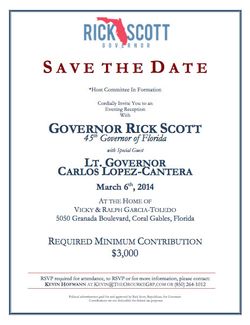 Less than a year after Rick Scott was elected governor, he was so disliked in South Florida that Miami-Dade mayoral candidate Carlos Gimenez said he didn't even vote for his fellow Republican.

What a difference a few years -- and the addition of Miami son Carlos Lopez-Cantera to Scott's ticket -- makes.

Behind the scenes, the newly minted lieutenant governor worked now-Mayor Gimenez to back Scott publicly and to hold a joint fundraising event for him on March 6 in Coral Gables. Here's the fundraising email from Gimenez backer Rafael Garcia-Toledo:

"Today Hillary Clinton is making two stops in Florida, speaking to college students and at a health care conference.

"Hillary campaigned several times last year for long-time crony Terry McAuliffe including headlining “women for Terry” events and once for her former campaign manager Bill de Blasio in New York. Yet for the 2nd time since she left the State Department Clinton has stiffed a female Democratic contender who could use the help. Last year it was Chris Christie opponent Barbara Buono, today its the Democrat candidate for the Florida 13 House Special Election, Alex Sink.

Phony outrage and why Alex Sink's immigration comments were right. But dumb.

They pearl-clutched and tut-tutted Tuesday after Democratic congressional candidate Alex Sink said at a candidate forum that Tampa Bay business leaders want immigration reform so that legal workers can “clean our hotel rooms or do our landscaping.”

The Republican Party of Florida condemned the "narrow-minded" comments. Sarasota's Republican Party called Sink a "racist." And Twitter and blogs lit up with the tired conservative indignation-argument about “if a Republican said that…..”

Well, turns out, Republicans and conservatives have said that.

“I am not in favor of a housekeeper or a landscaper crossing the border illegally,” Republican Sen. Marco Rubio said April 14, 2013 on CBS' "Face the Nation” while discussing his immigration-reform bill (a bill Republicans have blocked in the U.S. House and barely voted for in the Senate).

Alex Sink is running for Congress.

Florida’s former chief financial officer and Democratic gubernatorial nominee on Tuesday confirmed exclusively to the Tampa Bay Times that she is jumping into the race to succeed late Republican U.S. Rep. C.W. Bill Young in a district covering much of Pinellas County.

Sink, 65, has begun looking for a Pinellas home and said she will move “imminently” into the district from her east Hillsborough home 45 minutes away.

“Washington’s broken. And I, like everybody else I know, is angry and mad about the logjam, about shutting down the government, about not understanding the impact it was going to have on small businesses and people. The people up there just don’t seem to be able to work together,” said Sink, who had considered running for governor again but ruled that out in late September.

“I’m somebody who’s solved problems, has a long history of working with Republicans and Democrats to get things done,” said Sink, who used to run Bank of America’s Florida operations and was CFO from 2007-2011. “I believe I can be an effective advocate for the people of Pinellas County and get to Washington and make a difference.”

The special election campaign for one of the country’s most competitive seats won’t last long.

Posted by Patricia Mazzei at 9:35 AM in Alex Sink, Florida Politics | Permalink | Comments

Hope this doesn't prove embarassing. A couple days ago a reader emailed me about the race to succeed retiring U.S. Rep. C.W. Bill Young, R-Indian Shores:

How about Alex Sink running for Young's seat?  She would be a strong Democratic candidate.  She has the name recognition and she would also be another voice of reason for the House...

That thought hadn't occurred to me. I forwarded the email to Sink: "I've heard a lot crazier ideas...Let me know if you'd like Realtor recommendations," I wrote, curious if her interest might be piqued.

She did not respond to my (mostly) joking note. But now Peter Schorsch reports that according to unnamed sources Sink is seriously considering a run for that Pinellas seat.

If it happens - and we've heard no solid confirmation yet, just excitement from Sink fans - she would be have to be considered the immediate general election frontrunner, even if she did only beat Rick Scott in the district with 51.1 percent of the vote. Legally, Sink would not actually have to live in the district, though it certainly would be a bit unseemingly to live

Legally, she would not have to live in the district, but it would be a bit unseemly to continue living in rural Thonotosassa, nearly 40 miles away from the district.

“This district is a strong pickup opportunity for Democrats – and that’s why in the past 24 hours alone two top Republicans have already taken a pass at running," said DCCC spokesman David Bergstein. "A candidate – like Alex Sink – who has a strong record of solving problems would be extremely competitive in this district.”

Will she or won’t she run?

Don’t ask Alex Sink. She sounds utterly unsure about whether she’ll run for governor. But the 2010 Democratic candidate and prior state CFO at least sounds sincere about it.

“I go back and forth,” she said, adding she’ll decide by Oct. 25, when the state Democratic Party kicks off its state convention. “I really don’t know.”

Little-known and struggling financially, Nan Rich might get some help from the unlikeliest of places during the Democratic primary race for governor: supporters of Republican Gov. Rick Scott.

Scott’s top political advisor and pollster Tony Fabrizio hinted at the scheme late Tuesday night in a rare appearance at the Women’s Republican Club of Miami.

“I don’t know if Charlie Crist wins the primary against Nan Rich. And that’s not saying that Nan Rich wouldn’t have help,” Fabrizio said with a smile. “You never know. There could be interested citizens that like to help Nan Rich… Nan Rich is the true Democrat.”

Coincidentally, the legal-lobbying firm of Becker & Poliakoff is fundraising for both Rich and Scott.