And Senate President Andy Gardiner, R-Orlando, has told them as much.

“I met with Secretary Dudek last week and I told her, ‘You will get very pointed questions from the senators,’ and she needs to be prepared for that,” Gardiner said, adding, “Same thing with Dr. Armstrong, too.”

Speaking with the Times/Herald days after the resignation of Department of Economic Opportunity Director Jesse Panuccio, who was unlikely to be confirmed in at least one Senate committee, Gardiner said he expects particularly tough questioning for some agency heads. Dudek and Armstrong have to be confirmed by the Senate Health Policy Committee and the Ethics and Elections Committee before the full Senate decides if they can keep their jobs.

A long list of Gov. Rick Scott’s appointees is up for confirmation this session as the Senate punted many last spring.

That doesn’t mean they won’t be confirmed, though, despite persistent rumors in the halls of the Capitol that one agency head or another is in danger of losing his or her job. Gardiner said he knows nothing about rumors that Armstrong won’t be confirmed.

Just because the president hasn’t heard it doesn’t mean it isn’t going on. Gardiner, who is neighbors with Panuccio, said he didn’t expect the Senate Commerce and Tourism Committee would have voted down his confirmation.

“Even Jesse, who I liked and actually know well, I did not have a parade of members coming in here and saying, ‘We have a problem.’ "

After the Legislature's special Senate redistricting session ended tonight without a redrawn map of Senate district boundaries, Republican leaders addressed the next steps and whether they could have reached a different outcome.

The personal and political conflicts that have divided Florida Senate Republicans for months reached the boiling point on Wednesday as the Senate narrowly approved a redrawn redistricting map 22-18 and two powerful senators pointedly used the opportunity to finger each other for the chamber’s mistakes.

Democrats voted together in opposition to the map, which they said would be struck down by the court as unconstitutional violation of the anti-gerrymandering rules of the Florida Constitution. They were joined by Sen. Jack Latvala, R-Clearwater, and three other Republicans.

Following the debate, however, angry emotions spilled into view as Sen. Don Gaetz, R-Niceville, who was redistricting chairman when the invalidated 2012 maps were approved, rose for a rare “point of personal privilege," a rule that supercedes all others, and used it to criticize Latvala for blaming Gaetz for the Legislature having to redo the Senate map.

“Sen. Latvala says Don Gaetz is the cause for the special session. You decide. I am am sorry for my mistakes. Sen. Latvala should be sorry for his,’’ he said, reading from prepared remarks. “I take no satisfaction from this exchange. I did not seek it. But when a bully throws a sucker punch, you hit back and never give in.”

Over the last two months, Latvala has been harshly critical of Senate leadership because of the court’s rejection of the map drawn during the 2012 term, pointing out a Herald/Times report that the taxpayer cost of the redistricting litigation has risen to $11 million and suggesting the blame should be placed on Gaetz.

In arguing against the map on Wednesday, he did not mention Gaetz by name but said, “there’s a lot of doubt whether we here in this Senate have handled this issue in a way that we can be proud of.”

You can read the full story here. To judge for yourself, the full deposition is attached here (vol. 1) and  here (vol. 2).

The Senate entered in to a consent judgement with the Plaintiffs because on July 9, more than three years after they approved the current Senate map, the Florida Supreme Court imposed a new and unprecedented definition of legislative intent.

The Court’s most recent definition of legislative intent was not in place at the time Amendments 5 and 6 were approved for placement on the ballot in 2010 or when President Gaetz and Speaker Weatherford developed the process by which the House and Senate would draw new legislative maps in 2012.

I now have the benefit of numerous court rulings and constitutional interpretations, not available to President Gaetz in 2012, which I will consider when outlining a process to draw the new Senate map later this year.

Rather than going back and trying to dissect the 2012 redistricting process based on judicial guidance that didn’t exist until 2015, the Senate is moving forward to develop a new map that fully complies with the Court’s most recent interpretation of the constitution.

The Senate also issued what it calls a "fact check" of the story:

If Republicans in the Florida Senate are getting over their anger at Gov. Rick Scott's rash of vetoes, they sure don't sound like it.

Appearing on News 13's Political Connections, Senate President Andy Gardiner, R-Orlando, did not mince words in describing Scott's zeroing out of money for programs for people with disabilities and for the start of a downtown Orlando campus of the University of Central Florida.

Scott vetoed $15 million to start the first phase of UCF's "downtown presence," saying it was not on the three-year list of approved projects by the Board of Governors. Gardiner said the BOG backed the project but for less money and he defended the Legislature's right to increase appropriations.

He said Scott vetoed other university projects that had the BOG's support, saying: "That's where the inconsistency comes in from our members. They kind of wonder, what are we playing with here?"

Gardiner also accused Scott of vetoing projects that were supported by the governor's own agency heads. He called out by name Barbara Palmer, director of the Agency for Persons with Disabilities, saying she "advocated for" Senate-backed projects to help people with special needs enter the work force. APD did not respond to the Times/Herald's request for a response.

Gardiner is term limited. But he has another full year as president of the Senate and his staying power may be enhanced by the fact that Senate Republicans have not yet coalesced around a successor in the competition between Sens. Jack Latvala of Clearwater and Joe Negron of Stuart.

Legislative gridlock, dissension and uncertainty: Will it matter for GOP?

The Florida House quit early. Senate Democrats sued. The state still has no budget, and no one has figured out a compromise on how to pay for healthcare.

But last week’s legislative meltdown in Tallahassee, dramatic and dysfunctional as it was, doesn’t appear to threaten the political future of Republicans who control both chambers of state government — or of anyone else in their party running for office in 2016.

Most GOP state lawmakers remain in safe, conservative-leaning districts. Democrats have only a thin bench to challenge the ones who don’t. And there’s little indication that many Floridians are aware that their state Legislature, an institution followed far less closely than Congress, is gridlocked.

“I always use my parents, who live in Orlando, as a measure — and it’s fair to say the average Floridian isn’t paying a lot of attention compared to the rest of us living in the bubble of Tallahassee,” said David Hart, executive president of the Florida Chamber of Commerce.

A rundown of what happened: The House adjourned three days early, which was historically unprecedented, to protest a budget impasse and reject Senate demands to discuss Medicaid expansion under the federal Affordable Care Act. The Senate, united in rare bipartisan accord,stayed in town, passing bills to the empty chamber across the hall and accusing the House of violating the state constitution with its early exit on Tuesday.

Senate Democrats sued the House, asking the court Thursday to bring representatives back to finish their work. On Friday, the Florida Supreme Court ruled the House had violated the state constitution — but, with the midnight deadline of the regular session approaching, it was too late to call anyone back to Tallahassee.

Will any of it matter?

“I think there will be very little political fallout,” said Steve Vancore, a Democratic political consultant and pollster. 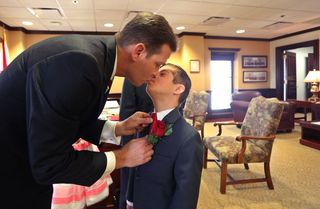 As Andy and Camille Gardiner drove home from the hospital with their newborn son Andrew, relatives crowded into their Orlando home to greet them. Andrew had just been diagnosed with Down syndrome and, as the car neared their home, they circled around the block to buy some time.

“We drove around for a while, just the three of us, and we made a commitment then, to Andrew,” Andy Gardiner recalled in a Herald/Times interview. “We were going to raise him just like every other child. We were going to push him and expect him to do things. So, here we are.”

Gardiner’s promise to his son that September day 11 years ago has shaped the trajectory of his 15-year legislative career. He became an advocate for children with special needs. Now, as the newly sworn-in president of the 40-member Senate, he has pledged to improve opportunities for Andrew and tens of thousands of others like him.

“It’s a fleeting moment, but I’m in a position where we hear from other families — about challenges that they’re having — and we can address some of those things,” he said.

Gardiner, 45, is one of the most powerful politicians in Florida. He’s using his two-year term, the capstone of a long career, to usher in an array of legislation aimed at providing a path to economic independence for, as he says, people with “unique abilities.”

The list of bills ranges from expanding scholarships for students with disabilities to promoting employment and adoption to creating university and college programs for students to graduate with a meaningful degree. The bills are on a fast track in the Senate, and many are moving in the House.

“The Senate has embraced this journey and I’m forever grateful,” Gardiner told his colleagues last Tuesday as he lowered the gavel to open the 2015 session.

Moments earlier, Gardiner had posed for pictures with his wife, and children — Andrew, 11, Joanna Lynn, 7, and Kathryn, 4 — in his Senate office.

His Bible lay open on his desk to Proverbs, Psalm 9, the prayer for wisdom. A wooden gavel with a brass nameplate sat at its side. And the room erupted with energy as his daughters, dressed in coordinated coral-colored dresses, whirled in.

Gardiner lays out session priorities and weighs in on broad issues 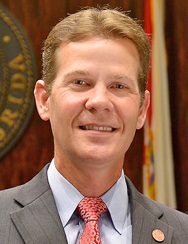 Senate President Andy Gardiner laid out his priorities in an information meeting with reporters Wednesday and said he will be focused on implementing Amendment 1, bringing more tax relief to Floridians and finding ways to help special needs students get broader employment opportunities.

Gardiner, R-Orlando, who was sworn in for the two-year term as Senate president in November, touched on several high profile issues that are likely to become the focus of the 60-day session in March.

MEDICAID -- Gardiner, vice president of Orlando Health, said he is open to hearing details on a compromise health care reform plan pushed by a coalition of hospitals this month, that would help the state move toward expanding Medicaid under Obamacare to cover more of the uninsured.

ENVIRONMENT -- He said committees will conduct hearing in January to hear what the authors of Amendment 1 had in mind as the legislature works on how to implement the new constitutional provision to dedicate one third of the state’s documentary stamp taxes to land and water preservation.

CLAIMS --Unlike his predecessor Senate President Don Gaetz, Gardiner is open to giving a hearing to the 33 claims bills filed to require state or local government pay a settlement or legal liability.

TESTING -- He wants his education committees to review the amount of school tests required of Florida k-12 students. “The jury’s still out on if we are over-testing,’’ he said. On Common Core, however, he said there are legitimate concerns about the proposal “but I don’t support walking away from that accountability.”