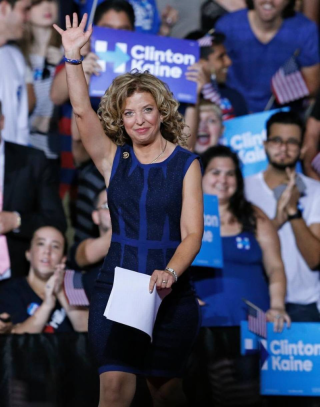 A week before the start of the Democratic National Convention, its chairwoman, U.S. Rep. Debbie Wasserman Schultz, strolled into the arena — of the opposing party’s presidential convention.

But Wasserman Schultz, persona non grata at the GOP, wasn’t engaging in covert political ops. She was being escorted into one of CNN’s makeshift studios to do what she does best: aggressively deliver the Democratic Party line.

“We should never let Donald Trump anywhere near the White House,” she said in another CNN appearance later in the week.

Consider it a warm-up for the Democratic convention, which begins Monday in Philadelphia and which will mark the culmination of more than a year’s work for the Weston congresswoman.

For Hillary Clinton, the presumptive presidential nominee, the convention will feel like a coronation. For Wasserman Schultz, the target of devotees of Clinton rival Bernie Sanders, it will probably feel much different. The woman tasked with holding the national party together is one of the reasons some of them feel divided.

On Friday, the WikiLeaks website published a trove of more than 19,000 Democratic National Committee emails that detail the party’s rancorous relationship with Sanders’ campaign. Last month, Wasserman Schultz acknowledged a “serious” email breach, that people knowledgeable about the incident blamed on Russian hackers.

UPDATE: CNN reports Wasserman Schultz won't deliver a convention speech -- unlike her Republican counterpart Reince Priebus last week -- "to keep the peace" among delegates in the wake of the email leak.

While Bernie Sanders and Hillary Clinton will rally together in New Hampshire Tuesday, delegates to the Democratic convention will gather in Broward for a unity event.

Backers of Sanders and Clinton during the primary who are delegates to the upcoming convention in Philadelphia will gather at the AFL-CIO office at 1700 NW 66th Ave. in Plantation at 5:30 p.m.

Miramar Mayor Wayne Messam, a surrogate for Clinton, and Broward Democratic Chair Cynthia Busch, who backed Sanders from her home state of Vermont in the primary, will speak.

In the March 15 primary, Clinton won 72.5 percent of the Democratic vote in Broward while Sanders won 26.5 percent. Statewide, Clinton won 64-33. 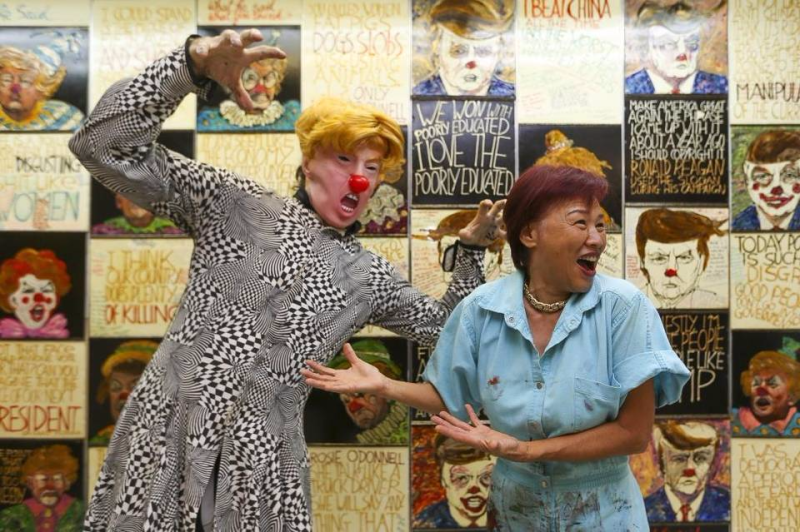 Just because you’re petrified about the future of the Republic doesn’t mean you can’t have a little fun.

On Friday night, that fun for Miami Beach artist Huong included harassing tourists with her sidekick for the evening: A Donald Trump clown.

“Mr. Trump” comically badgered those who walked past Huong’s gallery in the 1600 block of Washington Avenue without saying a word. He left the talking to Huong, who peppered each with same question: “Why are you voting for Trump?”

It was entertaining, of course. But it wasn’t Huong’s real goal. She hoped to lure people inside her shop, where Huong’s new, massive Trump-centric exhibit is on display.

On Saturday, Huong will officially introduce the Trump portion of “She Said, He Said — What do you say?” a collection of Trump, Hillary Clinton and Bernie Sanders portraits with some of the candidates’ most famous (and infamous quotes).

And here’s the twist: unlike paintings that hang in a museum, Huong’s artwork is meant to be touched.

She is encouraging the public to add their own take on the reality TV star-turned-politician. The mural doubles as an open message board, where people are urged to jot down their thoughts on Clinton, Trump and Sanders.

The ambitious project is the latest addition to Huong’s Peace Mural initiative, a Miami-based non-profit made up of artists, scholars and peace activists that she created at the turn of the century.

Clinton and Sanders supporters team up for phone bank

Supporters of Bernie Sanders and Hillary Clinton will hold "Stronger Together" phone banking across Florida on behalf of Clinton.

They will phone bank together starting at 2 p.m. at the Broward Democrats' office in Plantation.

Clinton beat Sanders in a rout  72.5 to 26.6 in Broward County March 15 and she won the entire state of Florida in landslide.

Juan Cuba, the executive director of the Miami-Dade County Democratic Party who backed Bernie Sanders for president, said Wednesday that Sanders should concede the nomination to rival Hillary Clinton.

"Bernie ran a great campaign that has given Democrats courage to run on progressive platforms and tugged the national conversation to the left," Cuba wrote in a public Facebook post. "But there is no longer a path to a nomination. He should have conceded last night after losing California and New Jersey. He has lost pledged delegates and the popular vote (even if you include estimates for low turnout caucus states)."

Clinton clinched the nomination late Monday, after the Associated Press canvassed delegates and revealed she had reached a majority. Sanders lost four of six primaries Tuesday, including California. The only remaining primary is in the District of Columbia next Tuesday.

The senator returned home to Vermont on Wednesday and will meet with President Obama on Thursday.

Sanders supporter Alan Grayson: Political revolution about more than one person or campaign

As presidential candidate Hillary Clinton locked up the Democratic nomination on Tuesday night -- making history and becoming the first woman nominee for a major political party -- Bernie Sanders supporter Alan Grayson didn't openly indicate whether she had his backing now, although Grayson has said he would back her if she were victorious in the primary race.

Grayson, a Democratic candidate for U.S. Senate, proudly endorsed Sanders in February after an online poll of his supporters. His Senate campaign previously told the Herald/Times that Grayson would vote for Clinton if she were the nominee.

During an interview with the Herald/Times last month, Pam Keith, the third Democratic contender for Florida's U.S. Senate seat, wouldn't divulge whom she preferred as the party's nominee -- citing positives and negatives about both contenders.

She offered these comments this morning:

Sanders announced Saturday that he is backing Canova and sent out a fundraising plea for him Sunday. Today, Canova's campaign announced that he had raised $250,000 since Sanders' weekend announcement. Sanders has been critical of Wasserman Schultz's leadership at the Democratic National Committee where he has said she has showed favoritism toward Hillary Clinton. Wasserman Schultz has denied that repeatedly.

It doesn't appear likely that Sanders will campaign for Canova in the Broward/Miami-Dade Congressional District 23 anytime soon.

"The senator's focus now is on the presidential campaign and winning delegates to the Democratic National Convention," Sanders spokesman Michael Briggs said.

Canova, a law professor running his first race, announced earlier this month that he had raised $1 million. Wasserman Schultz raised $1.8 million through March and hasn't released an updated figure. The next campaign finance reports are due July 15.

Wasserman Schultz has been endorsed by President Barack Obama and Vice President Joe Biden will headline a fundraiser for her at Stephen Bittel's Coconut Grove home in June.

Sanders told CNN's State of the Union this weekend that he is backing Canova, a first-time candidate and Nova Southeastern University law professor. Sanders has accused Wasserman Schultz of siding with his rival Hillary Clinton. Wasserman Schultz has repeatedly denied any favoritism and issued a statement Saturday saying she is neutral in the primary.

"The political revolution is not just about electing a president," states the email from the Sanders campaign. "We need a Congress with members who believe, like Bernie, that we cannot change a corrupt system by taking its money. So let me introduce you to Tim Canova, a progressive challenger who is running against Rep. Debbie Wasserman Schultz in a Democratic primary in Florida this year. Tim endorsed Bernie’s presidential campaign, and was inspired to run because of Wasserman Schultz’ support of the Trans-Pacific Partnership. His campaign is funded like ours, by lots of people giving small amounts of money."

Canova's campaign recently announced that he had raised $1 million. Wasserman Schultz raised $1.8 million through March and hasn't announced any updated figure. The next fundraising reports are due to the Federal Election Commission July 15.

The candidates will face off in the Aug. 30th primary for the Broward/Miami-Dade seat. The district leans left so the main contest is in the primary.

Quite a few South Florida Democrats, including some elected officials, made the Florida Democratic Party's list of statewide delegates to the July presidential nominating convention in Philadelphia.

Delegates had previously been chosen from each congressional district:

Sanders said in an interview for CNN's State of the Union that he will back Tim Canova, a first-time candidate who has raised more than $1 million since he jumped into the race in January. That still puts him behind Wasserman Schultz who has at least $1.8 million, but Canova's fundraising prowess has earned him national attention.

"Well, clearly, I favor her opponent," Sanders told CNN's Jake Tapper. "His views are much closer to mine than as to Wasserman Schultz's."

Sanders' announcement wasn't surprising given his ongoing feud with Wasserman Schultz and his relationship with Canova, who is now a Nova Southeastern University law professor who specializes in public finance. In 2011, Sanders chose Canova to serve on an advisory committee on federal reserve reform. And Canova has echoed many of Sanders' campaign themes -- particularly his desire for campaign finance reform.

Sanders has argued for months that Wasserman Schultz and the Democratic National Committee which she chairs have favored Hillary Clinton in the presidential primary including with an initially limited debate schedule. Wasserman Schultz co-chaired Clinton's first presidential bid in 2007 but has denied any favoritism during the 2016 primary.

In a statement, Wasserman Schultz responded: "I am so proud to serve the people of Florida's 23rd district and I am confident that they know that I am an effective fighter and advocate on their behalf in Congress.  Even though Senator Sanders has endorsed my opponent I remain, as I have been from the beginning, neutral in the Presidential Democratic primary. I look forward to working together with him for Democratic victories in the fall."

Canova said in a statement: "I'm so proud to know that Bernie Sanders favors our campaign for progress for all. Like Senator Sanders, I'm running a campaign that's truly backed by the people, not big corporations-- one that stands up to Wall Street interests instead of cozying up to them. Together, I feel confident that our campaign of nurses, teachers, students, seniors and working class Floridians can work together to demand accountability from our leaders, and offer a more positive path forward to the people of Florida's 23rd district."

Canova, who lives in Hollywood, and Wasserman Schultz, who lives in Weston, are competing in the Aug. 30 primary in the liberal Broward/Miami-Dade district.

Clinton beat Sanders in the district -- and Florida -- in a landslide in the March 15 primary. The challenge for Canova is to see if he can inspire Sanders' supporters -- and other Democrats in the district -- to topple a longtime incumbent with broad name recognition. Wasserman Schultz is well-known in Broward County where she was first elected to the state Legislature in 1992.

Clinton speaks in Fort Lauderdale Saturday night at a gala for the Trayvon Martin Foundation.

This is the first time that Wasserman Schultz has faced a primary opponent in a reelection since first winning the seat in 2004. Since then she has easily beaten longshot Republican candidates. President Barack Obama named Wasserman Schultz DNC chair in 2011.