U.S. Sen. Bill Nelson returned to his red clay roots on Tuesday and visited a modest cemetery behind the New Orange Baptist Church near the tiny Panhandle town of Chipley.

There, and in the cow pastures beyond it, five generations of Nelsons are buried, the offspring of Jens Nissen, Nelson’s great, great grandfather. The elder changed his name to John Nelson after arriving from Denmark to Port St. Joe 183 years ago in 1829.

“These folks are the salt of the earth. They lived a simple life and their children went on to have very successful careers,’’ Nelson said, pointing to the shiny gray tombstone of his uncle Donald, a veterinarian.

Nelson, 70, was greeted by cousins Catherine Nelson of Chipley and Margaret Ferguson of Tallahassee and joined by his son, Bill Nelson, Jr. The side trip to the cemetery was buffeted Monday and today by rallies in Pensacola, Panama City and Gainesville as Nelson barnstorms through the state in the most active two weeks of his campaign for a third term in the U.S. Senate. (Photo: Nelson and son, Bill Nelson Jr., at the family grave site in Chipley.)

UPDATE: U.S. Rep. Connie Mack IV, who has called for the U.S. to end funding of the United Nations, today announced that the international peacekeeping organization should be "kicked off U.S. soil" and "defunded."

The incident that sparked his outrage was an announcement by the Organization for Security and Cooperation in Europe that it will send 44 observer to polling places around the country on Election Day to monitor potential disputes at polling places. The organization is registered as an NGO with United Nations but the U.N. is not involved in monitoring elections in the U.S.

The request for voting day monitoring came from the Leadership Conference on Civil and Human Rights, the NAACP and the ACLU, among other groups. They warned in a letter to the OSCE of “a coordinated political effort to disenfranchise millions of Americans — particularly traditionally disenfranchised groups like minorities.”

Mack, who is chairman of the House Western Hemisphere Subcommittee, said “Every American should be outraged by this news,'' and concluded that "the only ones who should ever oversee American elections are Americans.”

His campaign said in a statement that U.N. monitoring "should be reserved for third-world countries, banana republics and fledgling democracies."

Scott Simpson, of the Leadership Conference on Civil and Human Rights and the organization that brokered the meeting, called Mack's attempt to link the U.N. to the group irresponsible.

Mack’s act of protection is a yet-to-be-heard congressional resolution listing the Chevron case as one of many reasons to withhold trade preferences with Ecuador. Resolutions are symbolic gestures, so it would take a law for Congress to take real action on Ecuadorian trade practices.

But, PolitiFact found, the Chevron case is complicated. Chevron says it did not get a fair trial in Ecuador and should not be held responsible. The resolution, however, appears to be designed to exert political pressure on the country in Chevron’s favor. PolitiFact Florida rates Nelson’s claim Half True. Read the ruling here.

From the Catholic News Agency, which doesn't note the timing of a lawsuit 18 days before the presidential election:

The Archdiocese of Miami and two other Catholic entities filed a lawsuit today against the HHS mandate, adding to the dozens of lawsuits already filed in the matter.

“The HHS mandate represents a real threat … we cannot just sit back and let our religious freedoms be taken away from us,” Archbishop Thomas G. Wenski of Miami told CNA Oct. 19.

Bolstering Catholic identity and teaching what it means to be a Catholic were also on the archbishop's mind.

“I think listening to Vice President Biden's remarks at his debate when he alleged there was no problem with the Church and the administration, also underscores the urgency of the problem, that there is a problem.”

Mediscare messages target seniors -- in races from president to legislature 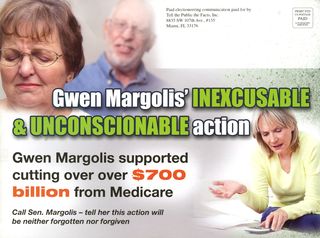 The attack ads arrive in the mailboxes of Florida voters and pierce the television airwaves with the rapidity of tracer bullets.

“Medicare Advantage could vanish,’’ reads a flyer from the conservative group, Americans for Tax Reform. “Barack Obama raided $716 billion from Medicare to pay for Obamacare,’’ reads another.

Politicos have a shorthand for the chatter: Mediscare.

The dueling messages are designed to stoke financial fears in the swing state with one of the biggest senior populations in the country. And even campaigns for the state House and Senate, which do not have any control over Medicare, are being hit with the attacks. (See the attached mailer sent out by the political consultant to Republican Senate Candidate John Couriel against Democrat Gwen Margolis.)

Separating fact from fiction is easy — if you realize that every claim is out of context, partially true, and just as partially false. But beneath the claims are some truths. Consider: keep reading

Mack conversion: he's no longer debating the value of debates

U.S. Rep. Connie Mack IV, whose campaign assiduously avoided debating his opponents during the primary, has now found religion. In a letter that is more campaign tactic than invite, Mack's campaign manager Jeff Cohen tells Nelson's campaign manager Pete Mitchell how important the evening was last night and how they want to have more debates.

"The people saw a glimpse into a future in which a new generation of leaders in Washington stand with the people and for the people,'' Cohen wrote. Here's the letter:

Democratic incumbent Sen. Bill Nelson held his own against challenger Republican U.S. Rep. Connie Mack IV and Mack showed he can spar like a contender in a vigorous debate between the two candidates in Davie Wednesday night.

While it was the most drama we'll see in the race for months, there were casualties. Facts.

The good news is, PolitiFact Florida had covered much of this territory before, since the candidates relied on most of the same attacks they have lobbed in television ads for the past two months. Here's a run-down:

Florida’s low-key U.S. Senate campaign got an hour of drama Wednesday as Democrat Bill Nelson and Republican Connie Mack IV sparred in an attack-filled televised debate that will serve as the only face-to-face match-up of the campaign.

Within minutes of opening the debate, the lines of attack emerged as Mack introduced himself as “a proud, mainstream conservative” and immediately attacked Nelson for voting to “gut our military,” cut Medicare and vote to raise taxes 150 times.

“I’ve got a simple litmus test,’’ said Mack, the Cape Coral Republican. “If you voted for higher taxes 150 times, it’s time for you to go.” Nelson, 70, who is seeking his third term, responded that “everything the congressman’s just said, is not true.’’ It was a line he repeated often during the exchange.

He accused Mack, 45, of partisan, ideological attacks that he described as “the problem with politics today” and said he has spent his career reaching “across the partisan divide” to “build bi-partisan consensus.”

The fast-paced debate covered all the hot spots as a panel of journalists, including the Miami Herald’s Toluse Olorunnipa, asked the candidates about the budget, Medicare, debt, domestic violence, national security, immigration and the Cuban embargo. With each question, both Mack and Nelson came prepared with reprisals of the same attacks they have lobbed at each other in television ads for months: More here.