Jose Lambiet of Gossip Extra reports that Palm Beach State Attorney Dave Aronberg is getting divorced. Aronberg is a former state legislator and lost a Democratic primary for Attorney General in 2010. Here is his report:

Lynn Aronberg, a public relations maven and event planner, confirmed she put in the paperwork about 3 p.m. at the West Palm Beach courthouse. The petition has yet to be processed by the county’s clerk of the court and won’t be made public until Monday.

In an exclusive interview with Gossip Extra, Lynn cited two reasons for her unhappiness.

She wants a baby, “like yesterday,” she said, and Dave doesn’t.

What’s more, Lynn’s obvious support for Donald Trump has caused a firestorm among those in Dave’s liberal base, and Lynn says her husband has not stood up to those who criticize her!

The news comes suddenly for those who know the county’s power couple. Dave and Lynn have appeared together at Mar-a-Lago and at recent Democratic events.

Dave, 45, and former Miami Dolphins cheerleader Lynn, 36, were engaged while visiting Paris in December 2014. They were married the following May before family and friends on the sand of St. Pete Beach, and Gossip Extra was the only news organization allowed to cover the couple’s big day.

Posted by Amy Sherman at 10:47 AM in Dave Aronberg | Permalink | Comments 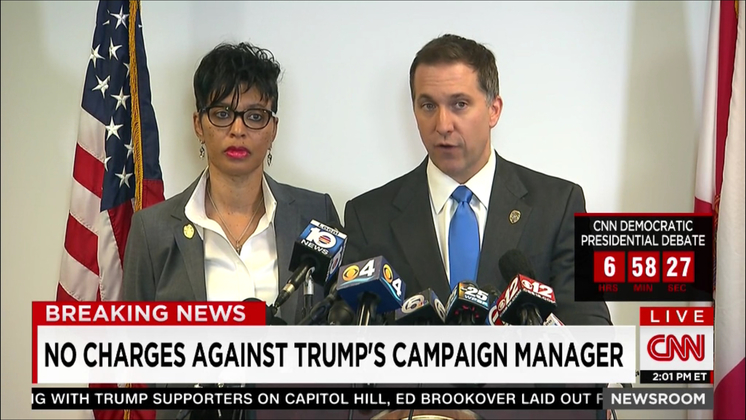 Donald Trump’s campaign manager will not be prosecuted for grabbing a reporter during an event in Palm Beach County, prosecutor Dave Aronberg announced Thursday afternoon.

"This office will not be filing charges against Corey Lewandowski for battery,” Aronberg said moments ago.

Lewandowski was charged with misdemeanor battery for the March 8 incident at Trump National Golf Club in which he yanked on the arm of former Breitbart News reporter Michelle Fields.

Aronberg said he agreed Jupiter police had probable cause for the charge but that evidence was not strong enough to sustain a conviction. “It is unethical for us to file cases when we believe there is not a good faith basis to proceed.”

Prosecutors showed new surveillance video they said showed Fields broke a "protective bubble" around Trump and slightly touched the candidate, after which Lewandowski grabbed her arm. Fields told a prosecutor she did not touch Trump.

Aronberg spoke with Fields today and "it was clear to us she was disappointed by the decision" to not prosecute.

On Twitter, Fields said she was asked by the state attorney's office if an apology from Lewandowski would be acceptable. "I said ya but haven't heard back about it," she wrote. Arongberg said an apology has been drafted.

Trump personally reached out to Aronberg a couple weeks ago and urged the prosecutor to "do the right thing." But Aronberg said Thursday that had "no bearing" on his decision.

The campaign said: "Corey Lewandowski is gratified by the decision to drop the misdemeanor charge and appreciates the thoughtful consideration and professionalism by the Palm Beach State Attorney and his staff who carefully reviewed this matter, as well as Mr. Trump’s loyalty and the support of his colleagues and family during this time. The matter is now concluded."

Aronberg, a former Demcratic state legislator, recounted his web of ties to players in the presidential race. He went to Harvard Law with Ted Cruz (they shared a bathroom, he said), knows Marco Rubio and is a supporter of Hillary Clinton.

The Palm Beach Post wrote about the role of the county's state attorney, Dave Aronberg, in the case involving Donald Trump's campaign manager. Aronberg, a Democrat, vows that party affiliation won't play a role and he has some ties to a few of the presidential candidates:

Politics won’t be a factor in deciding whether to prosecute Trump campaign manager Corey Lewandowski, Aronberg said Wednesday, and some prominent local Republicans have given Aronberg high marks for the way he’s run his office since his 2012 election.

But theorizing about political motives has already begun, with some conservative outlets drawing attention to the Clinton campaign’s November rollout of a 150-member “Florida Leadership Council” that includes Aronberg. Aronberg also contributed $1,000 to Clinton in January.

“COREY PROSECUTOR OUTED AS HILLARY SUPPORTER,” the Drudge Report blared on Wednesday, linking to an article that erroneously reported that Aronberg had “brought battery charges” against Lewandowski. While the Jupiter Police Department determined there is probable cause to charge Lewandowski, Aronberg’s office stressed on Wednesday that it has not yet received any information on the case to determine whether to prosecute.

“Law enforcement charges on a probable cause standard. The state has to proceed on a legally higher standard of proof, which is beyond a reasonable doubt as well as whether there is a reasonable likelihood of a conviction,” Aronberg said in a statement released Wednesday.

Republican Attorney General-elect Pam Bondi today named former state Sen. Dave Aronberg, a Democrat from Green Acres, to a newly created post in her office focusing on prescription pill abuse. "He’s very familiar with this issue. He cares very deeply about this issue," Bondi, a Republican, said of Aronberg, who made a failed bid to become attorney general, losing the Democratic primary.The fact that he’s a Democrat, she said, doesn’t matter."What I want to do is bring people together on all sides who all care about the issue," she said.

Aronberg will be based in south Florida and earn $92,000 a year as special counsel for the pill mill initiative. Shortly after her election, Bondi signalled she planned to make pain clinics that excessively dole out prescription drugs — so-called pill mills — a focus of her office. She set up a transition team that included Aronberg to examine the problem. "We’re at a critical point in our state regarding the number of pill mills. The numbers are staggering. We’ve got to do something to stop it," Bondi said. "Just the other day I had someone say that a friend’s child overdosed. I said, ‘It was Oxycontin, wasn’t it?’ They said, ‘How did you know?’ It’s so widespread in our state. That’s something we don’t want to be known for."

Bondi’s move is likely to come as good news to people concerned that Gov.-elect Rick Scott opted to cut the Office of Drug Control from his administration. Bondi said she will likely push for legislation to tighten Florida’s rules regulating pain clinics.

Aronberg served in the Florida Senate from 2002 until 2010 where he was advocated for legislation to establish a prescription drug database and to more strictly regulate the ownership and operation of pain clinics.

"After getting to know Dave last year, I quickly learned that we share a strong commitment to shutting down pill mills. I have complete trust in Dave's ability to take on this very important fight with me," Bondi said in a prepared statement, "It is unacceptable that Florida has become the nation's pill mill capital and that multiple Floridians are dying every day from illegal prescription drug abuse. In cooperation with federal, state and local law enforcement, we will use all the powers and resources of the Attorney General's Office in a comprehensive effort to eradicate pill mills from our state."

A insider's guide to the primary election

Will Rick's voters show up?: Turnout could be a major factor in the GOP primary for governor. Rick Scott is hoping thousands of casual voters flock to the polls to oust career politicians. A lower turnout could benefit Bill McCollum, who has the party infrastructure and a stronger base of supporters. A win by Scott tomorrow would set the GOP establishment on fire -- it would likely end McCollum’s political career and put his supporters on the spot over who they will back in November. Or how many people sick with the fight will pick third-wheel Mike McCalister?

Will Haridopolos get his candidates? A handful of key state Senate primaries could test the power of incoming President Mike Haridopolos. The Merritt Island Republican has weighed in on several races: Jim Norman over Kevin Ambler in Hillsborough’s District 12; Miguel Diaz de la Portilla over Julio Robaina in Miami’s District 36; Ellyn Bogdanoff over Carl Domino in District 25 in Palm Beach; and Lizbeth Benacquisto over Sharon Merchant in the sprawling Fort Myers-to-Palm Beach District 27. The winners in the two Palm Beach seats face tougher races in November, while the other two primary winners will likely capture a Senate seat tomorrow evening.

Will the Greer/GOP-spending scandal hurt candidates? Former GOP Chairman Jim Greer is gone but his connections to candidates and the party’s legacy of spending on credit cards remains. In Pasco County, former Marco Rubio aide Richard Corcoran is getting reminded of his party credit card spending in his state House race (HD45). And in Seminole County, House candidate Jason Brodeur still thinks Jim Greer is the “bees knees.” Will it hurt him?

Continue reading "A insider's guide to the primary election" »

UPDATED: In his final TV spot, Democrat Dave Aronberg closes his argument for attorney general with a positive advertisement that touts the endorsement of 18 local sheriffs and kind words from former office holder Bob Butterworth. (He didn't make an endorsement in the race, though.)

Campaign spokeswoman Allison Jones said the ad is slated to air starting today but offered no details as confirmation.

Greene hasn't made an official endorsement of Aronberg, a state senator whose district includes parts of Palm Beach County. But this palm card is close enough.

State Sen. Dave Aronberg of Boca Raton slings the epithet "Miami lawyer" at his rival for state attorney general, Dan Gelber, as if hanging a shingle in the 305 is something to be ashamed of. What's next, Miami-as-banana-republic jokes? (Not to mention that Aronberg has some 'Miami lawyer' buried deep in his own past. His first job was at Steel Hector and Davis in Miami.)

State Sen. Dave Aronberg is first to the punch in the television war in the Democratic primary for attorney general. His campaign debuted an attack advertisement this week that links rival Dan Gelber to BP. (Aronberg's claims about Gelber's former law firm's connection to BP are a matter of dispute. Find a PolitiFact ruling on the subject here.)

The advertisement focuses on the offshore oil drilling issue, showing Aronberg as the antithesis to Sarah Palin's drill-baby-drill mantra. (The ad even features a picture of her.) And the second half hits Gelber. See for yourself below.

No details from Aronberg's campaign on the ad or the TV buy. This is recorded from TV. (Apologies for the quality.)

Posted by John Frank at 9:09 AM in Dan Gelber, Dave Aronberg | Permalink | Comments

State Sen. Dan Gelber's first direct mail piece is landing in mailboxes this weekend and confirms the race is getting negative. It calls Sen. Dave Aronberg, his opponent in the Democratic attorney general race, that four-letter word this election year: "a typical politician."