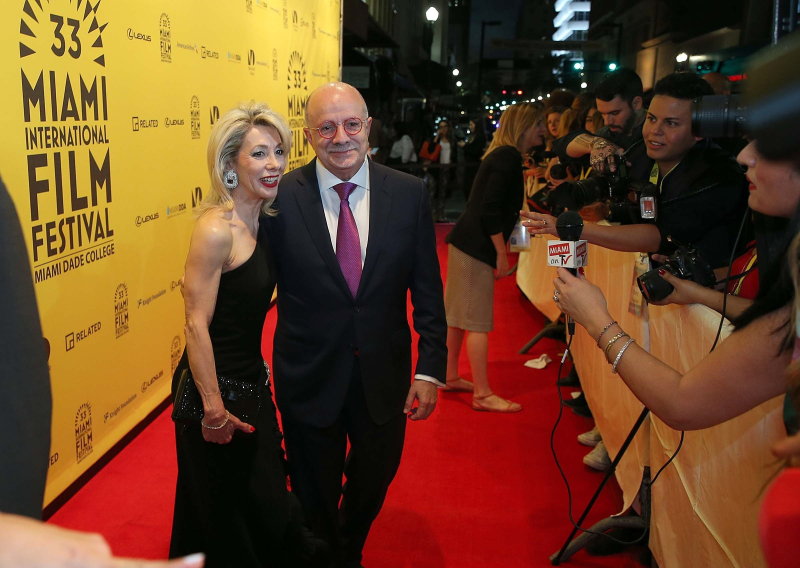 Obama hung the medals around each recipients neck in the ornate East Room of the White House with long gold-embroidered curtains, a giant chandelier and oil portraits of former first ladies.

Recounting Padron's childhood journey from Cuba, Obama said his career as an educator has helped countless young people follow in his footsteps of arriving an immigrant and realizing the American Dream.

"Eduardo made his choice to create more stories just like his," Obama said. "Dr. Padron has built a dream factory for one of nation's most diverse student bodies."

The former CEO of Digital Domain is hitting back with an alternative script after an Inspector General report slammed the process that helped the now-defunct Port St. Lucie film studio get $20 million in taxpayer grants.

John Textor said the claim by Gov. Rick Scott and Enterprise Florida that the Digital Domain deal was some kind of widely discredited proposal that had been blacklisted by Enterprise Florida, only to be slipped into the budget later by aggressive lawmakers and Gov. Charlie Crist—is complete fiction.

An email Textor provided to the Herald/Times shows that an Enterprise Florida representative wrote Textor on March 18, 2009, saying that the organization would “present to [the Office of Tourism, Trade and Economic Development] relative to a one-time award of $6.1 million” and other awards for a “total potential FL economic incentive package” of $11.4 million. The email, not included in the IG report, said Digital Domain would be required to create 300 jobs.

EFI never went through with a recommendation to OTTED (which is required for  economic incentives grants to be awarded), but Textor has a very different explanation for why that did not happen.

According to Enterprise Florida’s account, the organization refused to support funding because Digital Domain’s finances were “extremely weak” and its business model was suspect.  Textor has a different story, and questions Enterprise Florida’s credibility by pointing out that the organization believed Digital Domain’s business plan was strong enough to receive an $11.4 million incentives package.

Textor believes that he and others are being thrown under the bus as a way for Gov. Rick Scott to attack the Crist administration, which was in charge when Digital Domain received funding by getting special language tacked onto the state's budget.

The so-called "jobs bill" got more jobs laden before it passed out of the House 117-0 a few moments ago. The $218 million bill contains tax incentives for film productions, manufacturers and the space industry.

House members today added a sales tax break for future NFL Pro Bowls and all-star games for the NBA and NHL. Supporters argue that similar tax breaks are nearly a requirement to land such a game. Lawmakers also added a "Florida first" provision requiring construction contractors to hire Florida residents if their qualifications are the same as other candidates.

Early in the session, the Senate passed similar legislation and will likely look kindly on this new package. Sponsoring Sen. Don Gaetz said the only provision senators are looking closely at is one that guarantees the private investment -- starting in 2023 -- of infrastructure projects. He said he is still talking with House members about that section.

Florida's tax incentives for the film industry would be greatly expanded under a measure announced this morning by Orlando Rep. Steve Precourt. Joined by Senate President-in-waiting Mike Haridopolos, the Republican argued the incentive is a good way to encourage economic development.

The proposal would offer up to $75 million in credits for qualifying films each year for three years. Credits could be issued immediately but could not be claimed until 2012.

Florida's film incentives peaked in 2007 with a $25 million budget. That has been slashed to $10.8 million. In the current fiscal year, half of that budget is taken up by the hit TV show Burn Notice.

Posted by Lee Logan at 9:38 AM in Film, Florida Legislature | Permalink | Comments

Just before the close of business Tuesday, the Florida Lottery announced its intent to award a lucrative production contract to Mike Vasilinda, a TV news reporter who also owns a side production business.

Under the proposal, Vasilinda's company would film and produce the nightly lottery drawings for the next five years for $4.1 million.

The losing bidder, C.B. Lorch of Evolution Media Inc., cried foul. Lorch said he could do the job for about $120,000 less. He also noted that Vasilinda's wife, state Rep. Michelle Rehwinkel Vasilinda, sits on the Governmental Operations Appropriations Committee -- which oversees the lottery.

Rehwinkel Vasilinda, D-Tallahassee, said her husband has been producing the lottery drawings for 13 years, which is two years before the couple met.

"That's the decision the lottery made. I had nothing to do with it," she said. "The guy's done a good job on his contract, apparently." 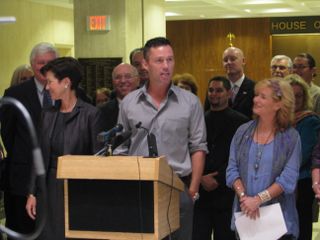 Better known as a spy who uses special ops training to help people, Jeffrey Donovan played a lobbyist for the TV (news) cameras Tuesday to highlight the economic impact his show brings to .

Photo: Jeffrey Donovan, star of Burn Notice, lobbying for more film tax incentives. On the left is CFO Alex Sink and on the right is Rep. Michelle Rehwinkel Vasilinda.

The star of USA Network’s top-rated show Burn Notice, Donovan was at the Capitol to lobby for more state film incentives and to help announce the new Film, Entertainment and Television legislative caucus.

Flanked by about a dozen lawmakers, CFO Alex Sink and State Film Commissioner Lucia Fishburne on the Fourth Floor Rotunda, Donovan relayed one example of how his show pumps up ’s economy.

While filming an episode in the second season, the film crew befriended a flower vendor in a bad area near . The next season, a writer for the show crafted an episode around a similar flower vendor and the show paid $10,000 to rent out his shop for a day.