That's hardly surprising for his city, with its robust gay population. But it's a little surprising for Seiler, who in the past had tried to stay on the sidelines of the same-sex marriage debate.

The proclamation, which says it's in recognition of the "Marriage Equality Landmark Decision," was read in part at a rally Friday at the Fort Lauderdale federal courthouse by City Commissioner Dean Trantalis.

Posted by Patricia Mazzei at 9:01 AM in Broward Politics, Gay marriage | Permalink | Comments

The New York Times compiled audio from eight leaders explaining how they came around to supporting same-sex marriage. One of them is U.S. Rep. Ileana Ros-Lehtinen, a Miami Republican, who on Friday called the U.S. Supreme Court's decision legalizing the marriages one that "reflected our values."

"I did not have an 'A-ha!' moment. I evolved just like society did," she told the Times. She also spoke about her son Rodrigo, 29, a transgender man who was born Amanda Michelle.

"People look at me and they think, 'Oh, it's because of her family situation that she thinks the way she does now," she said. "It really is not because of that. I would have evolved to that position. Certainly Rigo sped it up for me and made it more personal for me."

Jeff Bloom, 72, recalls decades ago when gay men got arrested in New York City for dancing together and when the Diagnostic and Statistical Manual of Mental Disorders used by psychologists labeled homosexuality a disease.

On Friday, Bloom witnessed a major milestone in the advancement of gay rights when the U.S. Supreme Court ruled to allow same-sex marriage nationwide.

“To me, I never thought in my lifetime I would see something like this,” said Bloom, a single gay man while getting his hair cut at the Richard’s Men’s Hair Shop in Wilton Manors. “They recognized love is love.”

Customers and staff watched the news on the TV at the hair salon on Wilton Drive, the heart of Broward’s gay community.

“All of us started jumping up and down and screaming,” said David Krombholz, manager of the shop.

Older members of the gay community said they hope that younger generations will learn about the struggles they faced but acknowledged they will now grow up in a different time. Many recounted how they spent years of their lives hiding their relationships at work and elsewhere and now have seen the highest court declare equality.

The U.S. Supreme Court legalized same-sex marriage in all 50 states Friday. Here's how Florida politicians reacted to the 5-4 ruling, updated as they come in:

I believe that marriage, as the key to strong family life, is the most important institution in our society and should be between one man and one woman. People who disagree with the traditional definition of marriage have the right to change their state laws. That is the right of our people, not the right of the unelected judges or justices of the Supreme Court. This decision short-circuits the political process that has been underway on the state level for years.

While I disagree with this decision, we live in a republic and must abide by the law. As we look ahead, it must be a priority of the next president to nominate judges and justices committed to applying the Constitution as written and originally understood.

The next president and all in public office must strive to protect the First Amendment rights of religious institutions and millions of Americans whose faiths hold a traditional view of marriage. This is a constitutional duty, not a political opinion. Our nation was founded on the human right of religious freedom, and our elected leaders have a duty to protect that right by ensuring that no one is compelled by law to violate their conscience.

I firmly believe the question of same sex marriage is a question of the definition of an institution, not the dignity of a human being. Every American has the right to pursue happiness as they see fit. Not every American has to agree on every issue, but all of us do have to share our country. A large number of Americans will continue to believe in traditional marriage, and a large number of Americans will be pleased with the Court’s decision today. In the years ahead, it is my hope that each side will respect the dignity of the other.

Guided by my faith, I believe in traditional marriage.  I believe the Supreme Court should have allowed the states to make this decision.  I also believe that we should love our neighbor and respect others, including those making lifetime commitments.  In a country as diverse as ours, good people who have opposing views should be able to live side by side.  It is now crucial that as a country we protect religious freedom and the right of conscience and also not discriminate.

Today's ruling reaffirms one of the paramount principles of America that we're all created equal and have the right to life, liberty and pursuit of happiness.

WASHINGTON — A divided Supreme Court made history on Friday, ruling that the Constitution ensures the right of same-sex couples to marry.

In a resounding decision that caps a remarkably fast transformation across the social, legal and political landscapes, the high court overturned marriage restrictions in Kentucky and three other states.

“Rising from the most basic human needs, marriage is essential to our most profound hopes and aspirations,” Justice Anthony Kennedy wrote.

The decision locks in same-sex marriage rights nationwide, guaranteeing that marriages that have already been performed must be recognized in every state. The only way to unravel the court’s action would be to amend the U.S. Constitution, a longshot that has fallen from political favor.

“The Constitution promises liberty to all within its reach, a liberty that includes certain specific rights that allow persons, within a lawful realm, to define and express their identity, “ Kennedy wrote.

Justices Ruth Bader Ginsburg, Elena Kagan, Sonia Sotomayor and Stephen Breyer joined in the majority decision. All were appointed by Democratic presidents, and their support for same-sex marriage was never in question.

Posted by Patricia Mazzei at 10:10 AM in Gay marriage | Permalink | Comments

Marco Rubio's comments to a Christian network last week over same-sex marriage made it onto an email fund-raising pitch from SAVE, the Florida gay-rights advocacy group.

The email, which SAVE sent supporters late last week, compared Rubio to Anita Bryant, the one-time singer and beauty pageant queen who became the most-high profile opponent to Miami-Dade County's human-rights law in the late 1970s.

"If Senator Rubio wants to be president in 2016, he should know that Floridians won't support anti-LGBT attacks at the ballot box -- just ask fellow equality opponent and Floridian celebrity Anita Bryant, whose effort to legalize anti-gay discrimination in Miami-Dade County was overturned by voters in 2002 with SAVE's help," the email read.

It cited Rubio's remark that Christianity faces a "real and present danger" from rhetoric that suggests same-sex marriage opponents are prejudiced -- and therefore their religion might be, too. The comment was widely mischaracterized after a liberal group inaccurately claimed Rubio had called same-sex marriage itself a danger.

SAVE didn't get into the level of detail; it only noted Rubio's opposition to same-sex marriage. He has said there is no constitutional right for same-sex couples to wed, though he has also said the issue should be left up to the states. 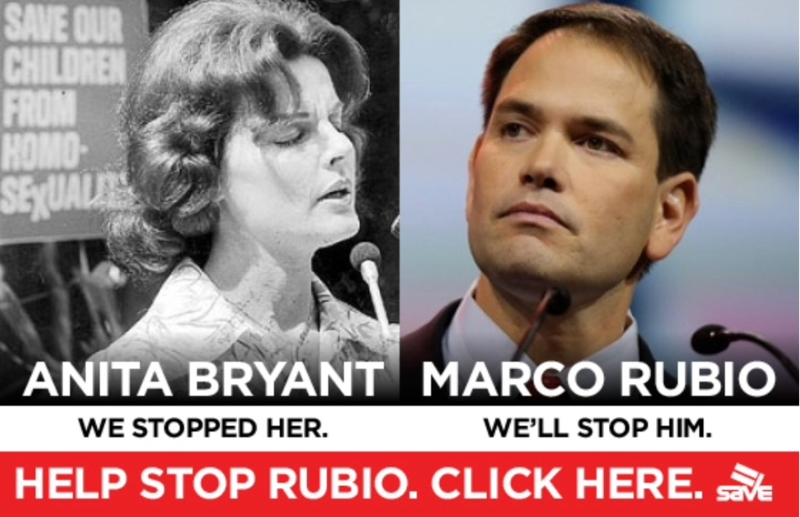 The fight over same-sex marriage will be in the spotlight again this week when the U.S. Supreme Court hears oral arguments Tuesday.

The court will hear arguments that pertain to two questions: whether the Constitution’s 14th Amendment, which guarantees due process and equal protection, compels states to recognize same-sex marriages and whether states must recognize such marriages performed in other states.

Kentucky, Michigan, Ohio and Tennessee will defend their bans before the Supreme Court. Currently 36 states and the District of Columbia allow same-sex marriage including Florida, although a challenge is underway in the 11th Circuit Court.

After Jeb Bush and Marco Rubio praised Indiana's RFRA, a closer look at the law

Bush said "Florida has a law like (Indiana's Religious Freedom Restoration Act)” -- a claim PolitiFact Florida rated Half True. Florida’s 1998 law differs in both text and context from the new law in Indiana which has been the subject of nationwide debate in recent days.

The bill has faced a backlash from gay rights groups and others who say it could be used by businesses to deny services to gays and lesbians. Today, Arkansas Gov. Asa Hutchinson announced that he wants a similar bill tweaked in his state before he is ready to sign it.

So what exactly is in the Indiana bill that has drawn reactions from Democratic and GOP presidential contenders?

To learn more, turn to PunditFact’s annotation of the Indiana law.

Likely presidential candidates have reacted to Indiana’s controversial Religious Freedom Restoration Act as Gov. Mike Pence, a Republican, has had to defend the law against those who say it discriminates against gays and lesbians.

Former Gov. Jeb Bush sided with Pence in a radio interview on Monday.

"I think Gov. Pence has done the right thing," Bush said in a radio interview with Hugh Hewitt on March 30. "Florida has a law like this. Bill Clinton signed a law like this at the federal level. This is simply allowing people of faith space to be able to express their beliefs, to be able to be people of conscience. I just think once the facts are established, people aren’t going to see this as discriminatory at all."

How similar is the Florida law to the Indiana law, or the federal law before that? When we reached out to Bush’s office, they reiterated that Bush was describing the laws as "very similar." We decided to delve into the evidence for a complete picture.

There isn’t precedent for the Supreme Court justices to limit marriages to heterosexual couples only, said Olson, a Republican attorney who supports same-sex marriage and has argued 61 cases in front of the Supreme Court.

"The United States Supreme Court 15 times over the last 120 years has said that ‘marriage is a fundamental right,’" Olson said.

Olson continued, "Never once in any of those cases did it say that it had to be between a man and a woman. Fifteen times it said it was a matter of privacy, liberty, association, dignity and respect for the individual."

We wondered about these 15 cases and if they really don’t define marriage as solely between a man and a woman.

Posted by Amy Sherman at 10:41 AM in Gay marriage | Permalink | Comments