Judge recuses herself in George Sheldon's lawsuit against Rick Scott

As proof of how small-town Tallahassee can be, Circuit Court Judge Angela Dempsey on Tuesday recused herself from hearing the lawsuit filed by Democrat Attorney General candidate George Sheldon against Gov. Rick Scott.

Sheldon is alleging that the governor has failed to report more than $200 million in assets on his state financial disclosure form in violation of the Florida Constitution. His lawsuit, filed two weeks ago, was assigned to Dempsey, appointed to the bench by former Gov. Jeb Bush.

Dempsey, however, had previously been represented by Scott's general counsel, Pete Antoncacci, on an ethics charge and Sheldon said that posed an inherent conflict of interest. Dempsey was charged with inflating her record in campaign documents and received a public reprimand by the Florida Supreme Court.

"Plaintiff reasonably fears that, no matter how much the judge attempts to be completely fair and neutral in resolving all issues in this case, that there would be a natural bias or prejudice when the decision would have consequences to her personal life and in particular the relationship with both Judge Dempsey’s ex-husband as well as her children,'' wrote Don Hinkle, Sheldon's lawyer in the motion to recuse.

Dempsey agreed to the motion. No word yet on which judge has received the assignment in her place. Download Motion-Recuse Dempsey (1) (1)

Sheldon files suit to force Gov. Scott to disclose all of his financial assets 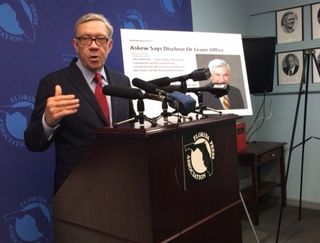 Sheldon, a former deputy attorney general under Bob Butterworth, is running against Republican Pam Bondi. His lawsuit, filed in Leon County just weeks before Election Day, alleges that the governor has relied on a “web of complex financial arrangements” to shift investments and hide his “financial interests from public view.”

Sheldon is asking a judge to order Scott, Florida’s wealthiest governor, to “immediately and accurately disclose all assets he owns or controls,” and to declare the governor’s “blind trust” in violation of the blind trust law he signed.

The Florida Constitution requires elected officials every year to make a “full and public disclosure” of their assets and liabilities “in excess of $1,000” so that the public can monitor any potential conflicts of interest.

The complaint follows a Herald/Times story published last weekend that raised questions about the completeness of the governor’s financial disclosure in light of the blind trust he created, numerous trust accounts he has established, and the differences in which he reports his finances to the federal government and the public.

The Herald/Times and investigative Broward Bulldog site have previously reported that the governor’s investments in companies that have benefitted from his policies have raised questions about the overlapping nature of his role as private investor and public servant.

Scott’s campaign manager Melissa Sellers defended the governor in a prepared statement Tuesday, saying the governor is “in full compliance with both federal and state reporting requirements, which are different.” 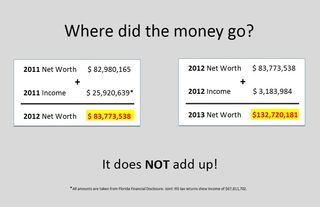 Florida’s three attorney general candidates highlighted stark differences in their views on issues ranging from Obamacare to gambling and medical marijuana during a televised debate Monday, but incumbent Pam Bondi didn’t commit on the issue of the day — gay marriage.

After the Supreme Court announced it would not hear appeals from five states seeking to prevent gay marriage, Bondi hedged when asked how her office will handle a U.S. District Court judge’s decision to overturn Florida’s ban on same-sex marriages. The attorney general’s office previously has defended the ban on the state and federal level, and has appealed the district court’s decision to the 11th Circuit Court of Appeals in Atlanta.

“My office, I think it just came out less than three hours ago, will be reviewing that, see what happens next. There are a lot of other cases in the pipeline,” Bondi said. The debate, the only one scheduled for this race, was taped in Bay News 9’s studio.

Democratic opponent George Sheldon said it would be best for Floridians if Bondi dropped the matter immediately.

“Government ought to get out of the business of telling people who they can love,” he said, adding that Bondi has a “higher responsibility” to defend not only the Florida Constitution, but the U.S. Constitution, as well. “It is now clear, with the Supreme Court’s action, what that means.”

Sometimes contentiously, the candidates batted issues back and forth for an hour, including Libertarian Bill Wohlsifer, a Tallahassee attorney.

Bondi, who repeatedly stressed she was focused on making Florida a safe place to live and work, said she didn’t like provisions of Amendment 2, the medical marijuana initiative before voters. Wohlsifer, who said he helped write a medical marijuana bill brought before the Legislature in 2013 and 2014, said the amendment didn’t go far enough, while Sheldon decried the hysteria surrounding the measure. He zeroed in on concerns about the amendment’s caregiver provision, which detractors say is too broad in its definition.

“This is no different than a caregiver for a citizen whose doctor prescribes oxycodone, or doctor prescribes other kinds of things,” Sheldon said. “I happen to trust the doctors of this state in terms of how they prescribe this medication.”

Bondi shot back, saying, “I don’t have full faith in all our doctors after shutting down the pills mills. I think we’re going to have a pot clinic on every corner and that the doctors who prescribed it would have full immunity.” Story by Joshua Gillin of the Tampa Bay Times here.

Pamela Wise, a 41-year-old mother from Starke, and Elizabeth Way, 53, of De Leon Springs, took the podium at a press conference Wednesday and shakily described the suffering they've endured from having pelvic mesh implants, a topic that's been highlighted mostly in sensational TV ads paid for by trial lawyers.   But the problem is real, they said.

"People have died and wanted to die because of this pain" Way, a former firefighter who now walks with a cane, said.

But the press conference also had a political message -- standing by Wise and Way was Democratic candidate for Attorney General, George Sheldon, adding his support while taking a dig at his opponent, Pam Bondi.

Democratic attorney general nominee George Sheldon is stepping his campaign up a notch through the launch of his own political committee.

Called "Floridians Seeking Common Ground," the PAC will be co-chaired by former Attorney General Bob Butterworth and Walt McNeil, the former Corrections secretary who is now chief of police in Quincy. Shelton said his goal is to use the pack to build a coalition of supporters unsatisfied with the Republican-led Cabinet, particularly Attorney General Pam Bondi, on such issues as the environment and restoration of rights for felons.

Floridians Seeking Common Ground is not yet showing up on the state's Division of Elections website as a registered entity.

During this mornings news conference, Sheldon also said he has been in talks with Democratic gubernatorial candidate Charlie Crist and will embark on joint voter turnout initiatives. He also is pushing Bondi to more debates beyond the one that both have agreed to.