State House Speaker Will Weatherford is a founding member and former director of a Texas company that since 2008 has received $826,676 from Florida’s state-run insurance company, according to records obtained by the Florida Center for Investigative Reporting.

Weatherford, a Republican who represents Wesley Chapel, has never disclosed his and his wife Courtney’s relationship with Mt. Pleasant, Texas-based U.S. Cat Adjusters, which has been a contractor for Citizens Property Insurance for five years — while Weatherford was a member of the Florida House of Representatives.

Weatherford declined to be interviewed for this story, but in an emailed response to questions, the House speaker said he has made no money from his connection to U.S. Cat.

“Since the company’s inception, neither Courtney nor I have ever received a single dollar of income,” Weatherford wrote. He acknowledged that he was “listed” as a board member for several years.

Weatherford has not reported the relationship to U.S. Cat Adjusters on state financial disclosure forms.

Sitting on a record cash surplus of $6.4 billion, Citizens is hoping to ink a special deal Wednesday with Heritage Property and Casualty Insurance Company, a St. Petersburg firm that opened for business nine months ago and made significant political contributions.

Heritage has donated more than $140,000 to Scott and the Republican Party of Florida in recent months, and spent tens of thousands more lobbying the Legislature. Now it’s in line to get special treatment from Florida’s state-run insurance firm in the form of an unusual and lucrative “reinsurance quota share” agreement.

If the Citizens board of governors approves on Wednesday, the state-run insurer will pay Heritage up to $52 million to take over 60,000 policies, about $866 a piece.

The proposal is the latest effort in Citizens’ controversial and aggressive campaign to reduce risk and revive the private insurance market.

Proponents say the push to shrink Citizens will pay off when the next hurricane hits, saving consumers from having to bail out the state-run insurer. Critics see the campaign cash and lobbying by Heritage as evidence that Citizens and Scott are tapping the insurer’s $6.4 billion surplus for special giveaways to politically-connected companies.

“Citizens’ board continues to fall prey to Tallahassee lobbyists who cook up these get rich funding schemes,” said Rep. Frank Artiles, R-Miami.

Five years after Hurricane Wilma whipped through South Florida, the insurance industry is still picking up the pieces:

• Claims for Wilma continue to trickle in this year, for damage homeowners say they have just discovered from a five-years-ago storm.

• Several insurance companies have collapsed and those left standing are raising rates.

• The state's largest private insurer tried to abandon Florida and only remains here in exchange for dropping 125,000 policyholders and increasing premium prices.

• Sinkholes, labeled by some as a scourge nearly as big as mold, are being blamed as the source of more claims than ever, including well outside the state's ``sinkhole alley'' in Central Florida.

• Public adjusters -- who work for consumers who may be having trouble getting help from their insurers -- are driving up costs and filing questionable claims. More here.

Just as State Farm officials were about to get grilled before a House panel on insurance, the State's Chief Financial Officer has formally asked the state's largest private insurer to allow their agents to write other homeowners policies. The way it works now is that State Farm agents can only write State Farm policies, but they can also write Citizens Property Insurance Corp. policies. There's a fear that State Farm's withdrawal from the market will end up pushing a lot of its policies into Citizens. Read it here.

Charlie and Nikita linked together?

For the second time during this 10-day special session to balance the budget, Rep. Frank Attkisson has sounded a dire warning to fellow lawmakers: More budget cuts are to come if something isn't done about reduce property insurance rates and reduce property taxes, which he called the "twin towers" that could continue to stifle Florida's economy. 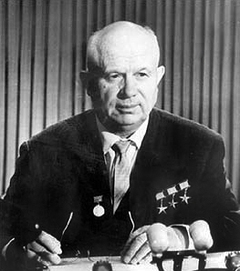 Attkisson, who voted for the initial House package of insurance reforms last January, now calls the insurance plan adopted by the GOP-controlled Legislature and hailed by Gov. Charlie Crist as "socialistic" and that it is more akin to Nikita Khrushchev. Attkisson went further and told state workers they better be worried about their jobs because more cuts are coming if the economy doesn't turn around.

(UPDATE: Rep. Curtis Richardson, who represents part of Leon County, apparently didn't like Attkisson's remarks. He called them "callous" and "wrongheaded" and said state workers should be applauded for their work.)

State Rep. Ellyn Bogdanoff, R-Fort Lauderdale, just released her Personal Injury Protection bill that she acknowledges can't pass in the Senate -- at least not now -- because it limits lawyer fees and chiropractic and other non-emergency care.

Heading into a special three-week lawmaking session Sept. 18, Bogdanoff said she was in a Catch-22 over the legislation. If she released it, she said, she would get attacked by all the special interests who have a stake in keeping the current system or scrapping it. But if she didn't release the bill, the issue would go nowhere.

Story about that here

Ross: Insurance law is for commies

Rep. Dennis Ross, the Lakeland Republican who was one of just two nay votes opposing the January windstorm insurance fix, has been a busy writer these days.

First, he penned an editorial for the James Madison Institute on the need for scrapping the January insurance fix. Download Ross1.rtf

Then, he just sent out a letter rapping insurance commissioner Kevin McCarty for focusing on "rate reduction solely for the sake of rate reduction and not for the purpose of fostering a competitive market which will ultimately result in the return of private industry.  There has been no effort made by OIR or the Legislature to instill a private market that will compete for consumers’ business."

He continues: "I urge you to consider changing your course and begin anew."

Ross has some ties to the re-insurance industry, having taken an industry-paid Bermuda dinner cruise in June 2006. Story here.

"As we learned during the Senate’s medical malpractice insurance hearings (in 2003), the stories told under threat of perjury can differ dramatically from those told without fear of sanctions," Geller wrote.

This of course seems to be a seasonal event. Legislators come to Tallahassee, vote for a series of bills, proclaim their worthiness, and then....go home and complain about it.

Yesterday legislators who represent Manatee County acknowledged that what has happened on property taxes and insurance hasn't worked out like they had hoped. Rep. Ron Reagan, a Bradenton Republican, said the insurance reforms passed earlier this year were supposed to be a "home run" but "in my opinion we hit a single."

Sen. Michael Bennett, a Bradenton Republican, went so far as to say insurance companies lied when they promised lower rates in exchange for the state assuming more risk in the hurricane catastrophe fund. Both Bennett and Republican blamed leadership in the House and Senate for not pushing ahead with a larger tax cut plan. More here.

Rubio refuses to say if he ousted lawmakers

House Speaker Marco Rubio refused to answer questions Thursday on whether he had forced Rep. Don Brown, a DeFuniak Springs Reublican, and Rep. Dennis Ross, a Lakeland Republican, to give up their leadership posts in the Florida House. Rubio announced a day earlier that Ross and Brown had offered their resignations, but Ross said that Rubio demanded that he resign because Ross voted against the big insurance reform package passed by lawmakers on Monday.

"I stand by my statement,'' said Rubio, shortly after watching Crist sign the insurance bill into law. "I have nothing further to say on this issue."