Jeff Greene praised Trump as a "great guy" after 2016 election 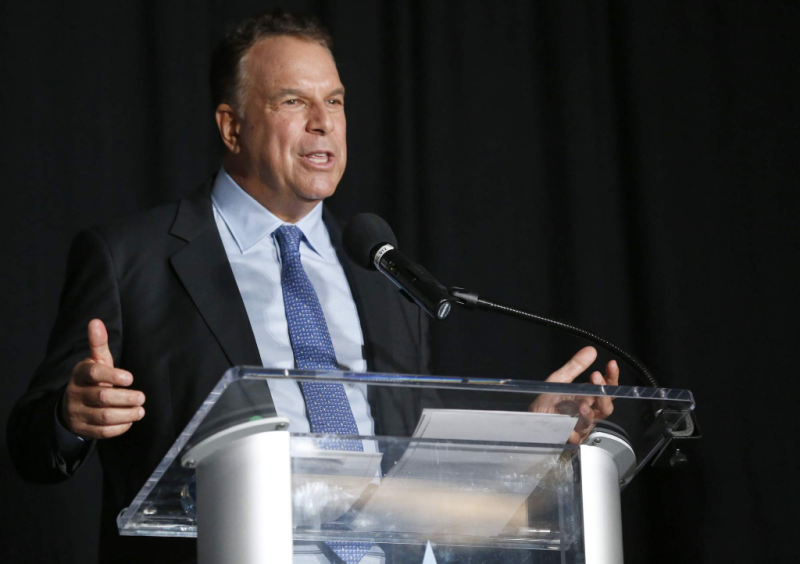 Billionaire Jeff Greene is doubling down on the anti-Trump rhetoric this week by parking a campaign bus emblazoned with "Trump's worst nightmare" outside of Trump's rally in Tampa today.

It's not quite the same message he gave 20 months ago.

Unlike his Democratic opponents in the governor's race, Greene praised Donald Trump on national television and in a magazine interview in the days after the 2016 election, calling for Democrats to unite around the president-elect, whom he called a "great guy."

"I supported Hilliary Clinton as a Democrat. I’m delighted Donald Trump is the alternative," Greene said on Fox Business on Nov. 9, the day after the election. "He’s a great guy. I know Donald Trump."

He continued, "I only hope that the Democrats do the exact opposite of what the Republicans did when Mitch McConnell and John Boehner said we want Barack Obama to be a one term president.

"Let’s hope that Donald Trump succeeds for all of us."

And in an interview with Forbes that published the next day, he again repeated that he wanted the Democrats to rally around Trump.

That rhetoric wasn't unusual in the days after the election. While many Democrats were horrified and despondent at Trump's unlikely victory, some did wish for Trump's success. Even President Barack Obama said, "We are now all rooting for his success in uniting and leading the country."

But those types of statements are toxic in the 2018 Democratic primaries, where liberals despise Trump and are appear fired up to vote against Republicans.

And of all the Democrats running for governor this year, Greene has the closest ties to the president. Greene lives down the street from Trump's Mar-a-Lago Club, where he's a member. And he's also spoken of Trump in more personal terms, noting at various times how Trump is a "gracious guy," and a "personable guy."

Apparently realizing the vulnerability, Greene has billed himself recently as the anti-Trump candidate, even featuring an apparent confrontation with Trump in one of his commercials.

(His opponent, former Miami Beach Mayor Philip Levine, has also been criticized for not being strong enough against Trump.)

Greene's spokeswoman, Claire VanSusteren, said Monday that he's had an extreme change of heart about the president since the election.

"Like many Americans, I’d say, (Greene) wanted to give Trump a chance, hoping the rhetoric he gave on the campaign was something to grab attention and grab headlines and clinch the vote," she said. "He very, very quickly realized that was not the case."

She said he doesn't regret his statements because "everyone should hope for the success of our president and our country."

"I think he stands by wishing and hoping for the success of our president, but he’s clearly become the bully in chief," VanSusteren said. "Jeff will say he rules with humiliation and provocation, and that’s not within the value system of the United States of America."

Posted by Lawrence Mower at 6:40 AM in 2018 Election, Jeff Greene | Permalink | Comments

Jeff Greene says he thought about running for president

Palm Beach real-estate developer Jeff Greene, valued by Forbes at $3.3 billion, says he briefly thought about throwing his hat in the 2016 presidential ring.

"I was approached by a lot of people when Hillary [Clinton] was struggling who called me up and said, 'Jeff, why don't you get in this Democratic primary? You could be the intelligent, articulate business voice. Sort of like the other side to Carly Fiorina," said Greene, who lost the 2010 Democratic primary for U.S. Senate in Florida to then-U.S. Rep. Kendrick Meek.

"It's always tempting to get back into politics," Greene told the Miami Herald reporter in a phone interview last week.

"I have three little kids, and I like picking them up at school every day," he said.

He's staying on the sidelines of the Democratic primaries for president and for Senate in Florida.

"I'm going to wait for the general election," he said. "I want to let the primaries take their course."

Greene said he's focused these days on one key political issue: the hollowing out of the middle class.

He's organizing a three-day conference in Palm Beach in early December called "Closing the Gap: Solutions for an Inclusive Economy."

Palm Beach billionaire Jeff Greene accused The Miami Herald and St. Petersburg Times in a libel lawsuit filed Wednesday of orchestrating a ``plan to assassinate [his] character'' that cost him the Democratic primary for the U.S. Senate in Florida.

Greene, who lost to Miami U.S. Rep. Kendrick Meek by 26 percentage points, said the newspapers published stories about his real estate dealings in California and his 145-foot yacht Summerwind that were ``knowingly based on false information.''

``Defendants . . . published the articles with the goal of destroying the personal, business and political reputation of Greene,'' the suit claims.

Greene, represented by prominent Atlanta lawyer L. Lin Wood, is seeking a total of $500 million in damages from the two papers. More here.

Where will Jeff Greene's people go?

There weren't that many of them, considering Kendrick Meek's landslide victory in the Democratic Senate primary, but will Jeff Greene's supporters go to Meek or to Gov. Charlie Crist, who is running as an independent?

"I'm a loyal Democrat. Kendrick called me yesterday morning, and he was quite collegial, very nice,'' she said. "I'll be there to help him, whatever I can do I will do...I don't think he did much of anything in Broward and maybe he learned his lesson and things will turn around...I hope he reaches out to me again."

Democratic Rep. Jim Waldman of Coconut Creek, another Greene supporter, said he's not sure whom he'll back in the general election. Both Meek and Crist called yesterday, he said.

"I have not committed to either,'' he said. "My biggest interest in all of this -- and it was the reason I supported Jeff Greene -- was to make sure that Marco Rubio doesn't go to the U.S. Senate. His ultraconservative ideas are not consistent with mine...I'll say this: Charlie has a tremendous amount of support in Wynmoor, which is my largest voting bloc...Kendrick has a lot of work to do to repair his reputation in Broward."

We put together a fancy county-by-county map with the turnout and results from last night's primary. Check out the monster turnout in the panhandle and the relatively weak showing down in Dade and Broward. (Click here for an interactive version)

Despite proclamations that he had "thousands and thousands of volunteers," U.S. Senate candidate Jeff Greene never really built a grass roots network to match rival Kendrick Meek.
The point couldn't be made clearer than by attending Greene's election night party in West Palm Beach. By 8 p.m. as polls closed across the state, in a ballroom that could easily fit 250 supporters, sat 15 or so, and workers were called in to remove chairs that filled the room.
"I'm counting on Florida feeling like I do, fed up and frustrated with what's going on in Washington," Greene said shortly before polls closed.
-- AARON SHAROCKMAN

Democratic Senate candidate Kendrick Meek says he's planning a quickie statewide tour "to thank supporters throughout Florida,'' but the schedule sure has the feel of a victory lap. Polls show Meek has reason to be confident that he will beat rival Jeff Greene but still....

Meek is planning stops tomorrow in Miami, Hollywood, Boca Raton, Orlando and St. Petersburg. The Greene campaign is usually not too forthcoming about releasing his schedule in advance, but the request has been made.

Regardless of which Democrat wins, Gov. Charlie Crist and former House Speaker Marco Rubio are expected to kick their general election campaigns for U.S. Senate into gear on Wednesday with statewide tours, but the campaigns have not yet released details.

Anxious to bring Democratic voters drifting to Gov. Charlie Crist back into the fold, Democratic Senate candidate Kendrick Meek has been reminding voters everywhere he goes that he's one of the few primary candidates backed by President Barack Obama. At a time when some candidates would rather not be tied too closely to the increasingly unpopular president, Meek features a picture of him and Obama on the front page of his campaign brochure.

In an e-mail to reporters today, political strategist Steve Schale, who led Obama's successful campaign in Florida, blamed Meek's Democratic rival, Jeff Greene, "and to some extend, the Crist people have been pushing this absurd rumor that the DNC and the President are not supporting Kendrick Meek."

Please direct your attention, Schale added, to today's appeal from the arm of the national Democratic party, Organizing for America, urging Obama supporters in Florida to go out and vote for Meek.

"He has been a champion for middle class families and somebody who has not been afraid to stand up to the status quo and the special interests,'' said OFA Director Mitch Stewart, echoing Obama's remarks about Meek when he visited Florida last week.

At a campaign rally press conference near the American Legion hall in Tallahassee, Jeff Greene was clear: “I will support whoever the nominee is because I want to make sure that we have a Democratic-organized Senate in November."

(The event had its share of hiccups: In addition to reporters, two or three potential voters/joggers came by. The event moved from a nearby coffee shop after the owner said, "I just really resent people setting up political stagings in my coffee shop without telling me." An American Legion volunteer asked Greene to move off the property and stand on the public sidewalk for his press conference in front of a Vietnam memorial. Besides that, it went off without a hitch.)

Greene did not directly forgive Kendrick Meek for his negative ads (Meek said he has forgiven Greene), but did acknowledge, "We’re all one big Democratic family. We’re all going to rally together tomorrow night, so of course everyone will forgive everybody.”

Asked if Barack Obama is an "adversary" of Israel (see Greene's mailer), Greene had this to say: "No, I think the president is – I commend the president for organizing the September peace talks between the Palestinians and the Israelis.”

The relevant text of the mail piece reads: “At his White House visit in March, the American President refused dinner or photographs with Binyamin Netanyahu, a diplomatic snub reported widely throughout the world. Israel needs our support, militarily, monetarily and morally, more than ever before. As Senator, I will defend our Israeli Prime Minister no matter who the adversary.”

Crowd at Greene event wants to get paid

Was Democratic Senate candidate Jeff Greene the main attraction for about 50 people who came to the Mahogany Grille in Miami Gardens Sunday afternoon? Was it the free fried chicken and meatballs? The school supplies giveway?

For a bunch of folks, it was little bit of all of the above -- but mostly they were there to get paid. The campaign had offered them $50 a day to canvas neighborhoods, wave signs and make phone calls, and they had been told to come to the restaurant to get their money.

"He's a crook,'' said 22-year-old Sabrina Height, picking her teeth wth a toothpick after enjoying the spread of free food. She said she was owed $200. "He's giving us the runaround,'' she said. "To tell you the truth, I don't even know why I voted for him."

James Alvin, 43, who said he was owed $250, said he would probably vote for Greene's rival, Kendrick Meek "because of what his mom done." His mother, Carrie Meek, served in Congress from 1992 to 2002, when Kendrick was elected.

Greene spokesman Luis Vizcaino insisted that everyone who worked on the campaign would be paid. "They're here for a back-to-school event,'' he said of the people leaving the restaurant with armfuls of spiral notebooks, folders and No. 2 pencils.