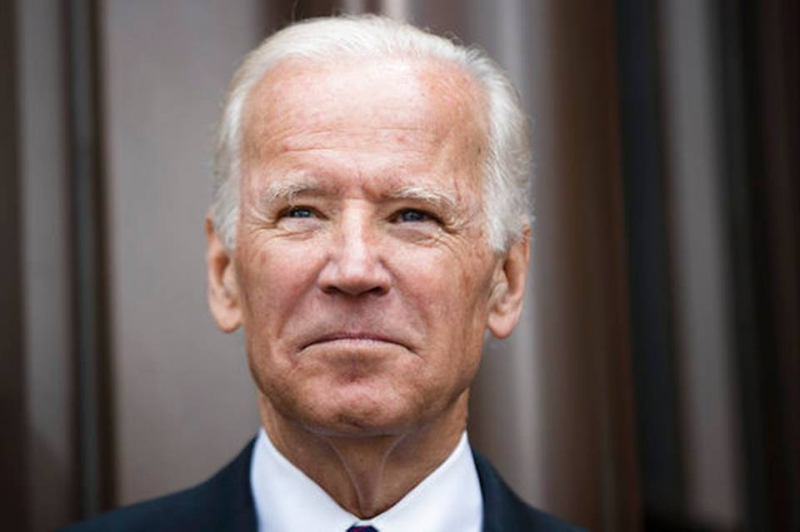 @amysherman1
Former Vice President Joe Biden will headline the Florida Democratic Party's annual Leadership Blue Gala June 17 at the Diplomat Hotel in Hollywood.
"We are thrilled to announce the former Vice President as our keynote speaker. Joe Biden has spent his life in public service and has fought tirelessly for the Democratic belief that all Americans deserve an equal shot in our economy, not just those at the top. We are excited to welcome him back to Florida for our Leadership Blue Gala," said FDP Chair Stephen Bittel in a press release.
Democrats will gather at the event with an eye toward generating interest in 2018 races.
​ 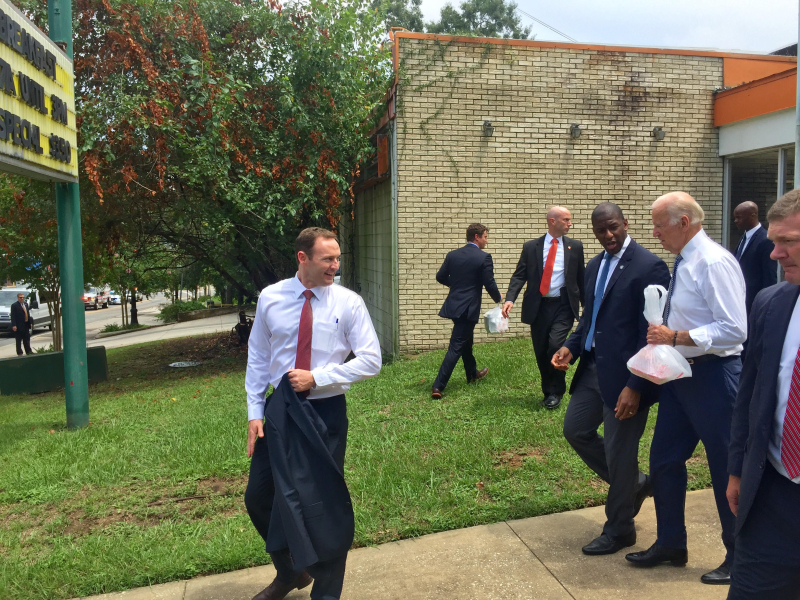 The last time Vice President Joe Biden was in Florida campaigning for Patrick Murphy, the dynamics of the state's high-profile U.S. Senate race were very different.

That was in mid-May.

Before incumbent Republican Marco Rubio decided to seek re-election after all -- up-ending the status quo of Florida's Senate race.

And before Murphy's campaign took a hit from multiple media reports that revealed Murphy had inflated his academic and professional credentials by either incorrectly stating them or by omitting a full explanation of his pre-congressional experience.

Murphy remains the Democratic front-runner out of a field of five, but in hypothetical match-ups against Rubio, Murphy is now behind by double-digits, instead of edging out the Republican pack as he was before Rubio jumped in.

But what hasn't changed since Biden's last visit is Biden's glowing support for Murphy, a 33-year-old, two-term congressman from Jupiter.

On his third visit to Florida for Murphy since March, Biden on Friday continued to shower Murphy with praise -- touting Murphy's youth and the need for Democrats to take back control of the Senate in November.

"It’s really important that we win back the United States Senate, no matter what the outcome of the presidential -- and I think we’ll do well in the presidential -- but there’s so much at stake in terms of the Senate," Biden said, while speaking to reporters as Murphy and Biden made an unannounced stop at O'leans Cafe across the street from Florida A&M University in Tallahassee on Friday afternoon.

When a Herald/Times reporter asked Biden for his thoughts on the media reports about Murphy's embellishments, Biden was quick to defend Murphy and dismiss the issue.

Biden fundraising Friday in Miami for Wasserman Schultz, in Tallahassee for Patrick Murphy 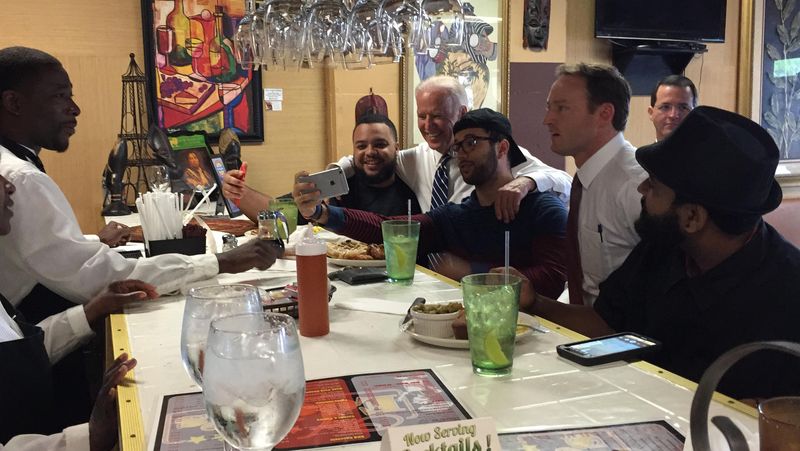 For the third time since March, Vice President Joe Biden is returning to Florida to campaign for Democratic U.S. Senate candidate Patrick Murphy — this time in Tallahassee.

A source close to Murphy’s campaign confirmed to the Herald/Times that Murphy and Biden are scheduled to attend a fundraiser together around midday Friday at the home of Don Hinkle, a Tallahassee personal injury attorney and prominent Democratic donor.

No details are available about any public campaign stops Murphy and Biden might make while the pair spend the afternoon in Florida’s capital city.

But Biden’s prior campaign trips with Murphy — first in Miami and then in Orlando — included an unannounced stop at a local restaurant.

After traveling to Tallahassee, Biden will fly to Miami to headline a a fundraiser in Coconut Grove for beleaguered Weston U.S. Rep. Debbie Wasserman Schultz, who last week resigned her post as Democratic National Committee chairwoman amid controversy over leaked emails.

Vice President Joe Biden's fundraiser for U.S. Rep. Debbie Wasserman Schultz has been cancelled due to the shooting at the Orlando nightclub.

Biden had planned to fundraise at Stephen Bittel's home in Coconut Grove Sunday night. Wasserman Schultz spoke at a vigil at the Pride Center in Wilton Manors Sunday and then will participate in a vigil in Miami Beach.

Wasserman Schultz is running in a Democratic primary against Tim Canova in a Broward/Miami-Dade district.

Joe Biden: 'What's the news' in saying I'd be the best president?

It's probably one of the most common questions Vice President Joe Biden gets from reporters lately: With how the presidential primary races have shaken out, is he at peace with not running for president this year?

The Democrat got that question again in Orlando on Thursday while speaking briefly with state and regional reporters, as he visited a soul-food restaurant and campaigned for Democratic U.S. Senate candidate Patrick Murphy.

Biden commented on recent headlines from national media, which were based on a remark Biden made earlier this week to "Good Morning America" co-host Robin Roberts. He told Roberts: "I would have been the best president."

"Why the hell would you run if you didn't think you're the best candidate? What's the news in that?" he said. "It doesn't mean that other candidates aren't really good, but it was the right decision for me and my family."

Emphasizing again that he has "no regrets," he said his decision to not run "had nothing to do with the other candidates. I really mean that."

When asked about Donald Trump specifically, Biden avoided an opportunity to openly criticize the GOP front-runner and, instead joked: "I have trouble figuring out the Democratic Party let alone the Republican Party."

Watch his full remarks above.

Biden described the Jupiter congressman as "the real deal" and a "raw talent."

"It wasn't about Alan; it was about the caliber of this guy," Biden said. "We need people in the Senate who can bring people together."

(Grayson, known nationally as a progressive firebrand, isn't afraid to say bluntly how he feels about other politicians, even within his own party.)

Biden reflected on his own time in the U.S. Senate -- saying how getting to know colleagues across the aisle was more effective and made it "hard to demonize" opponents.

Watch his remarks below, and click here to read more of our coverage.

Joe Biden charms while campaigning for Patrick Murphy in Orlando 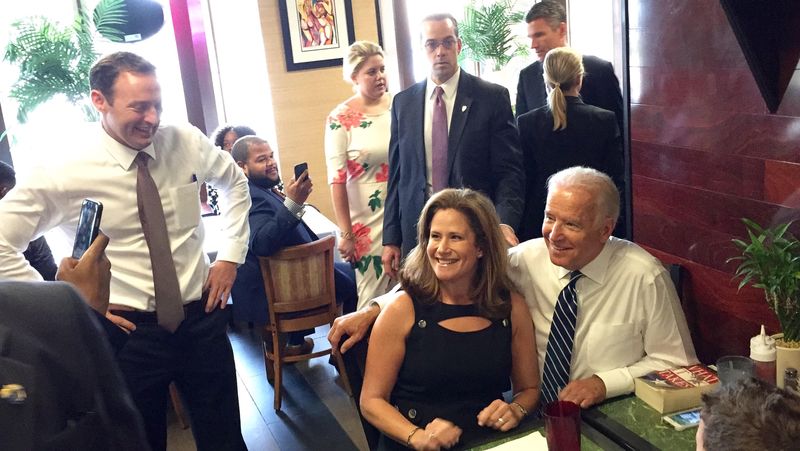 As Biden entered to small cheers from an expectant audience, the ever-charismatic politician joked to the 75 people gathered at Chef Eddie's restaurant: "Look, I hope you're all eating because what I don't want to have happen is the waitresses (get) angry because they're not getting tips because I'm here!"

Much as he did at a Miami restaurant while campaigning for Murphy two months ago, Biden worked the room with magnetic energy. He shook hands, offered hugs, snapped selfies and greeted every stranger as if they were old friends.

Murphy, a two-term Democratic congressman from Jupiter, seemed to struggle for the spotlight. He often lingered in Biden's metaphorical shadow -- even helping to take a photo of Biden and some of his admirers at one point. But Murphy was also able to introduce himself and chat with some of the guests, at least a few of whom seemed to be friends or acquaintances of Murphy's.

Dolled up in suits and dresses, most of the crowd seemed to be invited guests -- not average diners who'd happened to stop by the restaurant for some of its casual soul-food. All but a handful waited with reporters for over an hour before Murphy and Biden arrived.

But this time, it'll be on the turf of Murphy's Democratic opponent -- in Orlando.

Biden's official schedule for Thursday has him delivering remarks at 10 a.m. at an event for Murphy, which is being held "at a private residence."

After a speech in Tampa this morning, Biden and his wife, Dr. Jill Biden, came to Orlando this afternoon to attend the 2016 Invictus Games.

The Bidens are staying overnight in Orlando for the event with Murphy, before leaving Florida on Thursday afternoon to go to Wilmington, Delaware, according to the vice president's official schedule.

Murphy, a congressman from Jupiter, is in a fierce primary contest with fellow U.S. Rep. Alan Grayson, who lives in Orlando and whose congressional district represents part of the city. .

In late March, Biden headlined a luncheon fundraiser for Murphy in Miami-Dade County, after which the pair made a brief appearance at a restaurant in Miami’s Overtown neighborhood.

Biden's repeated presence in Florida is symbolic of both the significance of the U.S. Senate race here and the Democratic establishment's fervent support of Murphy over Grayson in the Aug. 30 primary.

The Senate seat being vacated by Republican Marco Rubio is seen as one of a handful of seats nationwide that could flip and, potentially, help Democrats win back control of the chamber.

Top Democrats -- including Biden, President Barack Obama and Senate Majority Leader Harry Reid -- have lined up behind Murphy's campaign. The lop-sided affair that has become a bit of a flashpoint in the primary contest.

Some of those tensions boiled over on this afternoon, when Grayson -- who has garnered most of his support from progressive leaders and grassroots donors -- confronted Reid during a closed-door progressive caucus meeting in Washington, D.C.

A political nonprofit says it is running this online ad against Patrick Murphy over questions about the cost of a campaign event featuring Vice President Joe Biden.

The ad will run primarily on Facebook, said Brian Burgess, whose client is Better Florida Alliance, a 501(c)(4) "dedicated to educating Florida citizens on the effect of pro-growth economic policies on Florida’s families and promote policies that encourage economic freedom and opportunity." The group does not have to disclose its donors.

The ad uses some of the "b-roll" that Murphy put up on his campaign website in the hope that friendly outside groups would use it for ads.

Murphy spokesman Joshua Karp writes: "We appreciate the efforts of a Republican dark-money group to raise awareness for Patrick's strong endorsement from Vice President Joe Biden. They were honored to campaign together in Miami just a few days ago." 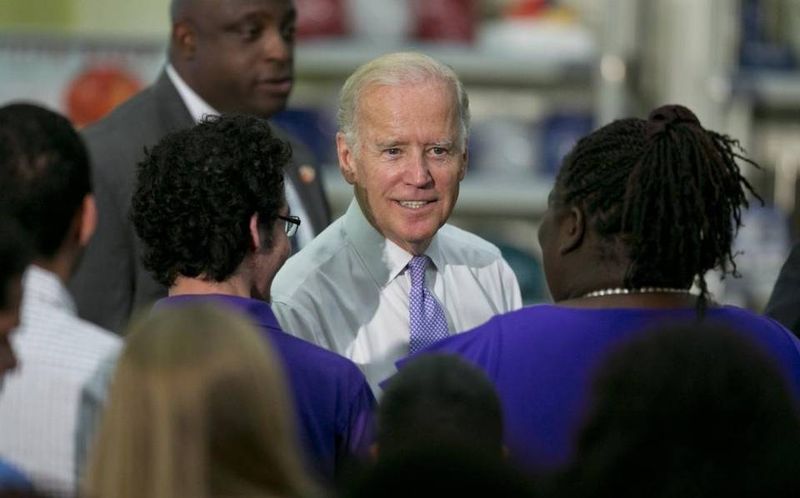 President Barack Obama and Biden endorsed the congressman from Jupiter earlier this month in the competitive race to replace Marco Rubio in the U.S. Senate next year.

At the time, Murphy’s campaign simultaneously said Biden and Murphy would “campaign together” in Florida on March 28. It’s unclear yet whether any public event will be held during Biden’s visit.

Biden last came to Miami in September for a speech at Miami Dade College about the importance of an affordable college education. (At the time, he had still been mulling a presidential bid but ultimately opted against one.)

It’s fitting that Murphy and Biden are appearing in South Florida, as opposed to elsewhere in the state. Murphy was born in Miami, raised in Key Largo and now represents northern Palm Beach County and the Treasure Coast in Congress.

South Florida is also where almost a third of the state’s 4.5 million registered Democrats reside.

Ahead of the presidential primary this month, Broward County still had the most of any county with about 554,000 registered Democrats. Miami-Dade County was second with more than 525,000, followed by Murphy's home of Palm Beach County with 361,000, according to the Florida Department of State.

The 32-year-old Murphy joined Florida's competitive U.S. Senate race a year ago this past Wednesday.

Since then, he has racked up significant endorsements and campaign contributions from major Democrats in his primary fight against fellow U.S. Rep. Alan Grayson, D-Orlando. The primary election is Aug. 30.

Murphy has, so far, raised vastly more dollars than either Grayson or their five Republican opponents. As of Dec. 31, Murphy had raised $1.46 million, leaving him with nearly $4.3 million in the bank to spend heading into 2016.

Any dollars raised during Monday's fundraiser will be reported in the next campaign finance report that U.S. Senate candidates must file with the Federal Election Commission by April 15. That report will cover Jan. 1 through March 31.