When a politically connected company was in danger of losing a $9.4 million no-bid contract with the state, Senate President Mike Haridopolos came to the rescue of the outfit — a firm that employs his good friend and political benefactor as a lobbyist.

Haridopolos staved off the threat to the deal with the Department of Juvenile Justice and quietly steered $6 million in additional dollars to the company, despite the vigorous objections of agency leaders and top Republican senators.

The move allowed Evidence Based Associates, a Washington-based probation program, the exclusive contract to handle the state effort to divert at-risk youth from costly prison beds into community programs. The company kept the business despite recent reports that it had failed to comply with key terms of the agreement —– and to the chagrin of a long list of providers who wanted to compete for the work.

The company’s lobbyist, Frank Tsamoutales, is a Brevard County Republican who has been a financial backer of Haridopolos since the Brevard County legislator was first elected to office in 2000. He went to work for EBA in April 2011, earning between $20,000 and $29,000 in the first year, the same year Haridopolos became Senate president.

Florida Governor Rick Scott, center, was all smiles Friday night on the Senate floor after the passage of the PIP bill. Senator Jim Norman, R- Tampa can be seen in the front. On the right, back, Senator Eleanor Sobel, D- Hollywood, who voted against the bill, did not greet the Governor. [Scott Keeler, Times]

The Senate approved personal injury protection reform on a razor thin 21-19 vote in favor of the “strike all” amendment then a 22-17 vote in favor of HB 119. Democratic Sen. Bill Montford of Tallahassee was the deciding vote initially, breaking with his caucus to support the compromise.

During debate on the legislation, Lt. Gov. Jennifer Carroll was seen in the wings of the Senate chambers. She chatted up members as they stepped out for a beverage.

Right after the Senate approved the “strike all” amendment to HB 119, Gov. Rick Scott came into the chambers and congratulated Senate President Mike Haridopolos. The governor's office said he also passed out handwritten notes to Senate supporters.

The vote allows both Scott and Haridopolos to close out the session with a victory.

“This is a triumphant moment for the residents of Florida,” Scott said via a news release issued minute after the Senate voted. “Members of the legislature heard our call to put Floridians ahead of special interests and combat the fraud that has become a billion dollar tax on drivers.”

Haridopolos says farewell: 'I'll miss being in the arena'

Senate President Mike Haridopolos, R- Merritt Island shows a smile Thursday on the floor of Senate before his official portrait was unveiled.

The Florida Senate unveiled the portrait of President Mike Haridopolos Thursday after 90-minute tribute that included laudatory speeches from members of both sides of the aisle.

Sen. Don Gaetz, R-Fort Walton Beach, who will succeed Haridopolos as Senate president next year, apologized for asking Haridopolos not to run for Congress. He predicted Haridopolos would have “been on an escalator to leadership” to continue to serve instead in the state Senate. He said that under his leadership “life was protected, our sovereignty was affirmed and our freedoms were upheld" and commended his accomplishments of Medicaid reform, the proposed revenue cap constitutional amendment and shrinking government.

"I'll miss being in the arena,'' Haridopolos said. "I'll miss some of you but I'll love being home...It's not 60 days. It's not 90 days. It's a full-time job if you're going to do a good job for the people you represent."

Senate sends its own PIP proposal back to House

UPDATE: Sen. Arthenia Joyner, D-Tampa, said she voted against the PIP legislation in error and later submitted paperwork to change her vote to a yes, meaning the measure passed unanimously. END UPDATE.

The Senate passed its version of PIP reform with a near unanimous vote and no debate, a big contrast to the contentious PIP discussions on Tuesday.

Now, the legislation goes back to the House, which has already approved a much different plan to alter the no-fault auto insurance system. Rep. Jim Boyd, R-Bradenton, said House members will first focus on understanding exactly what senators approved before deciding what they do and don’t support.

The Senate inserted its own language into HB 119 before approving the measure 39-1. Sen. Arthenia Joyner, D-Tampa, was the only “no” vote, but we don’t yet know why because there was no debate.

Continue reading "Senate sends its own PIP proposal back to House" »

There were somewhat familiar fireworks in the Senate Tuesday afternoon as leaders frantically tried to get their colleagues to reverse a decision on a component of personal injury protection, or PIP reform.

Senators initially voted 24-15 to approve an amendment filed by Sen. Miguel Diaz de la Portilla, R-Coral Gables, that authorized the continued use of attorney fee multipliers in PIP lawsuits. Immediately after that happened, Senate President Mike Haridopolos left the dais for several minutes and conferred with other leaders as onlookers scrambled to figure out what was happening.

Haridopolos and senators John Thrasher, Don Gaetz, Joe Negron, Garrett Richter, JD Alexander and David Simmons scurried to consult one another on the floor and then in a small meeting room known as “the bubble.” When the chamber was called back to order, Gaetz requested for a re-vote on Diaz de la Portilla’s amendment, saying senators didn’t fully understand what they were doing at the time.

Given a second chance to making a closing argument, Diaz de la Portilla said the “bully pulpit” had been used to “mysteriously reconsider the overwhelming vote by which my amendment was adopted.”

The Senate is divided again. This time it is over the so-called "parent trigger" bill that would empower parents of children in failing and low-ranked schools to set in motion the firing of a principal and the shift in the school to a charter school.
The bill passed the House on Thursday on a party-line vote and Senate Rules Chairman John Thrasher tried to pull the Senate companion by Sen. Lizbeth Benacquisto out of its last committee and directly onto the floor. But, after Democratic Leader Nan Rich objected, the motion failed to get the required two-thirds votes of the 40-member Senate and failed on a 20-19 vote.
Thrasher had a back up plan. He announced that the Senate will hold a rare Saturday morning meeting of the budget committee -- at 8 a.m. -- to take up the lone bill. "Be there or be square,'' he said after the vote. 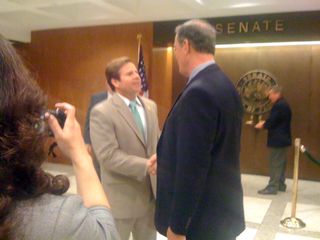 William Dillon, 52, was convicted of murder and served 27 years in prison before his release. The claims bill, SB 2, was a top priority of Haridopolos, who celebrated the victory Thursday with an emotional speech on the Senate floor.

“When there are people in prison who’ve been wronged, who should have never been there, we need to stand up as a Legislature and do what’s right,” Haridopolos, R-Merritt Island, said.

Dillon, of Satellite Beach, was in the gallery Thursday to witness the Senate’s vote to concur with the House version of the legislation. (The pictures shows Haridopolos greeting Dillon shortly after.)

When Mike Haridopolos was elected Senate president, he vowed to make the traditionally moderate chamber more conservative — in his own image.

But the University of Florida history instructor miscalculated one thing: The Senate by its very nature moderate. Haridopolos and Senate leaders attempted to push several controversial conservative issues in the past year only to have the Senate hit the ideological reset button and vote them down.

It happened two weeks ago with the vote to privatize 30 South Florida prison facilities. It happened last year with the tea party-driven proposal to require all employers to use E-Verify to check immigration status, with the proposal to ban state worker unions from collecting dues, with a House measure to split the state Supreme Court in two, and with dozens of bills that appeared as part of the budget on the last night of session.

Haridopolos and his leadership team wanted them; the chamber, dominated 28-12 by Republicans, still said no.

“The Senate’s independent streak is what distinguishes it from
the House,’’ said Senate Democratic Leader Nan Rich of Weston.
“It’s always there under the surface. You never know when it’s
going to emerge.”

The conflict played out again last week, when Haridopolos’ top deputies attempted to orchestrate a
coup to designate the Senate president for 2014 and 2016. Story here.

Senate President Mike Haridopolos broke his silence Wednesday and endorsed primary frontrummer Mitt Romney for the Republican Presidential Primary saying the negative attacks propelled him to to entre the fray.

"I was not planning to publicly endorse a candidate before the Florida primary.  However, I have grown deeply concerned and disappointed about the attacks being launched on Mitt Romney by other candidates.  I believe we are the party of better ideas,'' Haridopolus, R-Merritt Island, said in a statement.

But exactly 43 minutes after Haridopolos' endorsement, this item arrived in our email box from the Romney campaign, entitled: "Newt Gingrich: Leadership by chaos" and it linked to this Gingrich-bashing interview with two Republican congressment.

Haridopolos, who dropped out of the primary race for U.S. Senate in August, also chastised Romney's opponents for "spending too much time on misleading and counter-productive attacks.

Senate President Mike Haridopolos, in sworn testimony in the Jim Greer case, now admits not telling the truth last year when he denied that he and other party leaders signed a confidential agreement to force Greer's ouster.

"I believe what I told him was not the whole story, yeah," Haridopolos says in reference to the videotaped interview with Miami Herald reporter Marc Caputo in 2010.

In the deposition conducted last week in Tallahassee, Greer's attorney, Damon Chase, asked Haridopolos why he denied any knowledge of the agreement. The senator's explanation: "I said the contrary, because I thought I wasn't allowed to talk about it."