Exodus of Citizens executives to companies with contracts raises questions

In the past three years, at least three senior executives at Citizens Property Insurance who were in charge of multimillion-dollar contracts awarded to private companies went to work months later for those same companies.

Florida’s ethics laws ban state employees from going to work for a company for two years if their duties for the state job involved a contract related to that company. But Citizens, the state-run insurer of last resort, reads the statute more narrowly. Its executives say no one has done anything wrong.

Critics, however, say the situation is evidence of a revolving-door mentality at the public company that handles millions of dollars in contracts each year, and add that it raises serious questions about the fiscal management of the company, whose claims will be paid by taxpayers if Citizens runs out of money after a storm.

“Every dollar you don’t spend is a dollar that goes to pay somebody’s claim,” said Sean Shaw, the former Florida Insurance Consumer Advocate from 2008-10. “They should have a moral compass that says, ‘This is taxpayer money. We are going to be as careful as we should with our own pocketbook.’ ”

The head of the Florida Senate Banking and Insurance Committee, Sen. David Simmons, is calling for the ethics law to be tightened relating to Citizens’ contracts and has ordered Senate staff members to draft legislation to do that.

Posted by Mary Ellen Klas at 10:23 AM in Florida Property Insurance | Permalink | Comments

After a brief debate, the Florida Senate passed SB 1672 to shift homeowners who carry Citizens Property Insurance into non-regulated property insurance plans in an effort to get them out of the state-run company.

The Senate voted 22-16 to send the bill to the House, where a similar proposal was killed last year. Opponents the proposal could mislead homeowners into thinking they are getting the same insurance for less and could cause homeowners, seeking to save money, into out-of-state companies that aren't held accountable in Florida.

Under the bill, SB 1672, unregulated insurance sold by surplus lines carriers would be included in the list of options homeowners can choose from in the state-run clearinghouse when their policy is up for renewal.

These companies would have to offer the same coverage Citizens offers and rates must be 15 percent or but, since surplus lines are not regulated, there is no assurance the rates won’t change.

Sen. Jeremy Ring, D-Margate, said it was “admirable and some would say necessary to try to depopulate citizens insurance,’’ but he warned it will have unintended consequences.

"Surplus lines are not regulated,'' he said. "If they try to get their benefits after a storm, they’re going to have a tough time doing that."

In their zeal to shed policies in the state-run Citizens Property Insurance, the Florida Senate is poised to approve a bill that gives homeowners a low-cost, but unregulated, insurance alternative.

Opponents say the new policy -- to allow Citizens customers to select a surplus lines carrier when their policy is up for renewal -- is a wolf in sheep's clothing that could mislead homeowners into thinking they are getting the same insurance for less. Proponents say the plan is a free-market alternative that is a simple case of buyer beware.

"This is something that is provided as an option to a consumer,’’ said Sen. David Simmons, R-Altemonte Springs. "Should we as a legislature prohibit them after having the opportunity?’’

Under the bill, SB 1672, unregulated insurance sold by surplus lines carriers would be included in the list of options homeowners can choose from in the state-run clearinghouse when their policy is up for renewal. These companies would have to offer the same coverage Citizens offers and rates must be 15 percent and include a disclaimer that surplus lines are not regulated, but there is no assurance the rates won’t change.

"This is a classic bait and switch,’’ said Rep. Frank Artiles, R-Miami, who is opposing a similar bill, HB 1109, awaiting a vote in the House. "People decide with their wallets and if they are given a choice between an admitted carrier (traditional insurance) and surplus lines, many people are not going to read their policies and realize they’re not apples and oranges."

Florida Legislators have been trying to reduce the number of policies in the state-run Citizens Property Insurance Corp. because if a damaging hurricane were to hit the state and the company ran out of money to pay its claims, anyone who carriers an insurance an auto or property insurance policy in the state would be assessed a fee to cover the deficit.

Last year, legislators passed a requirement that homeowners cannot renew a Citizens insurance policy if a licensed insurance company offers comparable insurance at a price that’s less or comparable to what Citizens offers. Citiznes is allowed to raise it rates 10 percent each year. Story here.

More than 12,000 policy holders have sued the company in an effort to get their outstanding claims paid and, new data shows, the defense costs are rising — with the company billed more than $21 million for the last three months of 2013 alone.

Some of the longest-fought battles are in sinkhole alley — the section of the state that includes Hillsborough, Hernando and Pasco counties, which rest on a porous, cavity-prone limestone bed. The amount the agency spends on sinkhole litigation alone has has doubled — from an average per month expenditure of $944,345 for 2012 to $2,050,106 for 2013, according to data provided to state Rep. Frank Artiles, R-Miami, last week,.

As more than 2,100 homeowners have filed lawsuits for sinkhole damage reported more than two years ago, the legal costs of those claims are now costing

To deal with the mounting lawsuits, Citizens is fighting in the courtroom and at the capitol: Read more here.

The group settlement involves policyholders who were challenging the state-run insurance company for failing to agree to the method and cost of repair for sinkhole damage to their homes.

The company has watched as lawsuits have ballooned in recent years as most homeowners were challenging Citizens for forcing them to repair their homes by putting grout in the ground instead of underpinning their homes with steel beams, or both.

The policies included in the settlement were all represented by the Clermont law firm of Boyette, Cummins and Nailos. The cost to Citizens for making the repairs have not yet been determined but the avoided legal fees and streamlined repair procedure is expected to save the company about $30 million, said Citizens spokesman Michael Peltier.

“Our message to policyholders and the courts is if there is a confirmed sinkhole, we do want to repair the home – but we do not want to write a blank check,’’ said Dan Sumner, Citizens general counsel, at the company’s board meeting in Orlando Wednesday.

“For too long, Florida has been a donor state to the National Flood Insurance Program by contributing $16 billion over the last three decades, which is nearly four times the amount Florida homeowners have received back in claims," Scott said in a statement. "I also again extended an invitation to Speaker Boehner to join me if the President accepts my invitation to meet on this important topic. The President needs to let Florida families know now how he will undo the outrageous flood insurance hikes he forced on Floridians. Whether a legislative or executive fix, we need immediate action for Florida families.”

The move is a bit of a shift for Scott, who had basically ignored Congress and tried to press President Obama to take executive action. Boehner and other House leaders have indicated they do not like the Senate bill that passed last week, contending it goes to far in reversing 2012 reforms under the Biggert-Waters Act. Today, House Democrats attempted, and failed, to use a procedural tactic to get a vote on the Senate bill.

The bill is an effort to expand beyond the partial delay in flood rate increases included in a massive spending bill sent to the president Thursday. Under that proposal, FEMA would delay rate increases for some properties who were expecting rate increases beginning this fall because of new flood maps but it didn't address properties already hit by huge increases.  Download HOME Act of 2014

The proposal by Garcia, a Democrat, faces an uphill battle, however. House Speaker John Boehner said Thursday that the GOP-controlled House is “not going to do that” when asked about the legislation aimed at delaying the 2012 flood insurance fix, although he added he's willing to consider more modest, unspecified changes to the flood program.

CLEARWATER — A bill to alleviate skyrocketing flood insurance premiums was filed Tuesday in the Florida Senate — an attempt to find a state solution to what has so far been largely a federal issue.

The bill would streamline the state's regulatory procedures for flood insurance, add more state employees to vet insurance products and give home owners more flexibility about how much they insure, he said.

"We hope to have this bill to the governor's desk early in the session,'' Brandes said. "It is designed to go into effect immediately,'' he said, unlike most new laws which take effect in July.

Many mortgages written in Florida require homeowners to carry flood insurance, almost all of it provided by the National Flood Insurance Program. Congressionally mandated premium increases that began taking effect last year have caused some people's payments to rise so high that they cost more than the mortgage itself.

As Citizens dictates repairs on damaged homes, families try to push back 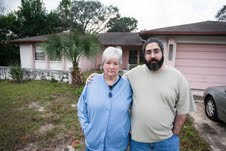 To Fred and Emilie Moutran, there’s no dispute that the cracks in the walls of their Spring Hill home were caused by the shifting ground of a sinkhole deep below the surface.

The floor under the chimney has dropped three inches. A gash runs across their mantel. A crack extends the length of a hallway, and the ceiling over the garage has shifted so much that the Moutrans fear it will collapse.

“We hear cracking and popping at night, sometimes all night long, and we’re starting to get very concerned,” said Fred Moutran, 31, who lives in the home with his 64-year-old mother, Emilie.

After two engineering firms concluded the damage was caused by sinkhole activity, the job of repairing their home and the stabilizing the ground fell to Citizens Property Insurance, the state-run company. For three years, the family has been trying to get Citizens to make the repairs.

But the insurance company sent them a check for $21,000 to cover cosmetic repairs, not the fixes to the foundation that will shore up their home.

“They want to force us to make the repairs their way,” Moutran said. “We paid for a service with the understanding it would be there when needed, not three years later.”

The Moutrans are not the only family accusing Citizens of denying repairs and delaying their case. An estimated 1,800 homeowners have filed lawsuits against the company challenging their sinkhole claims. Citizens acknowledges that most of the disputes involve disagreements over the method of repair. More here.

Posted by Mary Ellen Klas at 8:22 AM in Florida Property Insurance | Permalink | Comments

Scott and Bondi: We support Mississippi's attempt to sue FEMA over flood insurance

Scott and Bondi, however, have stopped short of putting Florida's muscle into the melee and have chosen not to join the lawsuit or file a companion challenge of their own.

“We are supporting Mississippi in their lawsuit against FEMA because the NFIP rate hike will not only hurt Florida families but will devastate our real estate market,'' Scott said in a statement.