Appeal a property tax bill? Under proposed law, you might still have to pay -- some

When real estate values plunged with the sinking economy, scores of owners appealed their property appraisals in an attempt to reduce their tax bills. That created a major backlog of appeals -- and a budget crunch for local governments.

A property owner with a claim under appeal does not have to pay taxes until the issue is resolved. Counties and school districts rely heavily on tax dollars to fund their yearly budgets.

Though the number of appeals has gone down as a continued drop in property values has resulted in a decrease in some taxes, the average wait time for a homeowner to get an appeal hearing in Miami-Dade is about two years.

Now Miami-Dade lawmakers in the state Legislature are pushing proposals to require property owners to pay some of their taxes -- 75 percent, to be exact -- while their claims are under appeal.

On Monday, the Senate version cleared its last committee stop, so the proposals (HB 281 and SB 880) head to the floor of both chambers.

The proposed constitutional amendment to impose a 5 percent Save Our Homes-style tax cap on the increase in assessed valuation of commercial property came under a barrage of opposition in the Senate Judiciary Committee Tuesday.

"We just don't believe that tax caps are the answer,'' said Lee Moffitt, the former House speaker now lobbyist for the building owners and managers association of Florida. "Tax caps neither reduce taxes fairly nor render a fair tas system...The system is only fair during the snapshot in time when it’s all enacted.''

Other opponents warned that the inequities might mean that some businesses can't sell their property, as the new buyers would be hit with higher tax bills, and could force local governments to replace the lost tax revenue by raising fees.

Sen. David Simmons, R-Altamonte Springs, agreed that "we have to be careful what we ask for and price controls don't work.'' He said the measure was in need of some refinements. "We don't want to inflict upon the commerical property in our state the same problems that have been created from Save Our Homes."

The First District Court of Appeal wasted little paper dismissing the latest appeal to the Save Our Homes Amendment and Amendment 1 challenge. That tactic used to throw out the constitutional caps on property tax assessments now appears to be all but dead. Download DCA SOA appeal

At a ceremony in the Capitol Thursday, Gov. Charlie Crist signed legislation that lowers the burden of proof for property owners who challenge their tax bills. Joining Crist at the ceremony were Mark Wilson of the Florida Chamber of Commerce (at left) and John Sebree of the Florida Association of Realtors (at right).

Before HB 521 became law, the burden was on the taxpayer to prove that the appraisal was incorrect. The new standard is the preponderance of the evidence, and the change "is an added protection for taxpayers and it's good public policy," Crist said. Asked about concerns by local governents that the legislation could "handcuff" them by costing them up to $500-million, Crist said: "Florida taxpayers feel handcuffed and they need some help."

The bill will not affect pending property tax challenges, but it will affect taxpayer challenges filed with counties' Value Adjustment Boards in 2009. Challenges are usually filed in August and September. The legislators who led the charge on the bill were Sen. Mike Fasano, R-New Port Richey and Rep. Carlos Lopez-Cantera, R-Miami.

Posted by Marc Caputo at 11:38 AM in Florida Property Taxes | Permalink | Comments

The preK-12 budget conference committee just met, with the Senate providing its counteroffer to last night’s House bid. The sides appear to be moving quickly to agreement, though the talk today was about provisions in the budget, not the funding numbers themselves. That comes later today. New in the Senate offer:

One of the biggest sticking points may end up being a plan to shift some property-tax money normally designated for school districts' capital budgets into its day-to-day operating budgets. That provision is still in the budget proposal, but lawmakers from Miami-Dade and Broward -- including Rep. Anitere Flores, a Miami Republican, Sen. Larcenia Bullard, a Miami Democrat, and Rep. Martin Kiar, a Davie Democrat -- said they hope to change that. Urban school districts with big-ticket construction, maintenance and technology have said the change might leave them without enough money for school upkeep.

A possible compromise: allowing school districts, at their discretion, so raise more property taxes to go to their capital budgets. Of course, that would pass the politically unpopular buck of raising taxes to school board members.

A bill that would shift part of the burden from taxpayer to the local property appraiser when the two are at odds, overwhelmingly passed the Florida House on Monday.

Under the proposal by Rep. Carlos Lopez-Cantera, R-Miami, if a property owner disputes the assessed value of his or her property, the property appraiser would need to prove that the office followed all state laws and professional standards when assessing a property -- a burden that currently falls on the taxpayer.

“During difficult economic times, it’s vital that we use every opportunity available to us to provide fairness and relief to Florida taxpayers,” Lopez-Cantera said in a written statement.  “The current property appraisal system is weighted heavily in the favor of government at the expense of taxpayers, and it needs to change.”

The House bill cleared that chamber 110-3. Sen. Mike Fasano, R-New Port Richey, is sponsoring a similar proposal in the Senate.

If the state's flailing economy was to give legislators any pause about embedding permanent tax cuts into the state Constitution, there was no sign of it in the House Military and Local Affairs Committee today. It passed along three constitutional amendments that would:

* Give first-time homeowners a one-time property tax exemption that would disappear over five years;

* Cap all property taxes at annual increases of 1.35 percent.

Chalk one up for Mike Haridopolos. The Melbourne state senator sent out a plaintive press release Tuesday urging the Florida Supreme Court to move up the date of the hearing on Amendment 5.

Today, they did. But it's likely they weren't responding Haridopolos but to the pleas from attorneys in the case from both sides, who on Monday filed briefs urging the court to move up the date. The court changed it from Sept. 8 to Sept. 3 -- in time for a quick decision, if they deliver one, to get the ballots approved by the Sept. 5 ballot deadline.

Warning of ballot confusion, Sen. Mike Haridopolos sent a press release out today urging the Florida Supreme Court to move up the hearing date, now set for Sept. 8, on the Amendment 5 challenge.

"By waiting until Sept. 8, ballots will be created with language that may or may not be on the ballot, costing the state valuable dollars and creating confusion for the electorate,” Haridopolos wrote.

It's not clear whether Haridopolos, who is not a lawyer, sent his comments via email or letter, or if he just expects the high court to respond to his press release after reading the blogs.

For Haridopolos, it doesn't hurt to try. “We understand that the Court has a set schedule and is flooded with numerous important requests,'' his press release notes, "but this issue is of urgent importance to Florida voters who deserve a clean ballot, free of language that has been ruled unconstitutional.'' 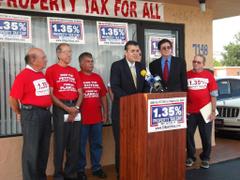 If you show up at the polls in Miami-Dade on Tuesday, don't be alarmed if you're hounded for your John Hancock.

Volunteers with the property tax reform group "Fair Property Tax For All" plan on canvassing county precincts Tuesday, to help drum up support and signatures for a tax proposal floating around since January.

About 100,000 signatures have been collected statewide since the group first launched its efforts in January, said Rep. David Rivera, a Miami Republican. It's still very shy of the 611,000 signatures needed to force the issue onto a state ballot.

Rivera, spoke at a Monday morning press conference outside of a Miami real estate agency trying to shore up support.

"With the judge's decision on Amendment 5, and property assessments arriving in the mail this week, it's given a renewed sense of urgency to this issue," Rivera said.