"During the last three years I have traveled tens of thousands of miles across our wonderful state and have had the pleasure of spending time with so many dedicated members of our party," Lopez-Cantera said in a statement that also noted Florida Republicans' success in the November election.

"More times and in more counties than I can remember, our chairman Blaise Ingoglia was there too. As a former State Committeeman for Miami-Dade I can't tell you how much I appreciate a chairman who travels the state spending time at local REC events all the while seeking input on building up our local parties, meeting with our grassroots leaders and then putting those ideas into action."

In a statement of his own, Ingoglia thanked Lopez-Cantera: "We are blessed to have him as a member of our Republican Party and I am grateful for his support and friendship."

In 2013, Ingoglia ousted then-Chairwoman Leslie Dougher, Scott's pick to remain in the job. The relationship between the RPOF and Scott has never mended; the governor is hosting his own ball during President-elect Donald Trump's inauguration, an event usually organized by the state party.

But Ingoglia has secured endorsements from big-name Republicans across the state, including U.S. Sen. Marco Rubio and a group of members of Congress. Lopez-Cantera also broke with Scott when he endorsed and campaigned for Rubio during the Republican Senate primary last summer -- and was sidelined by the governor's office as a result.

The party election will take place Saturday in Orlando.

Posted by Patricia Mazzei at 9:15 AM in Carlos Lopez Cantera, Republican Party of Florida | Permalink | Comments

Florida GOP Chairman Blaise Ingoglia, who has been avoiding reporters since Donald Trump's Billy Bush tape surfaced, finally agreed to discuss his party's Republican nominee tonight before the start of the annual Republican Party of Florida Victory Dinner in Tampa.

"What Donald Trump said in that videotape was offensive. It was degrading to women, and I'm not going to defend it because it's indefensible," said Ingoglia, a state representative from Spring Hill. "But what's equally offensive is the prospect of a Hillary Clinton presidency. I think that's what a lot of Republicans are concerned....We're going to continue doing what we do, which is getting as many Republicans out to the polls as possible."

He acknowledged some loyal Republicans have reservations about Trump, saying he tells them to consider "everything they have worked for over the past 10, 20 years in trying to get good conservative Republicans elected and advocating for those types of policies, could all get wiped away in one election."

Headliners tonight are Marco Rubio and Mike Pence. At least 600 guests are expected that the downtown Tampa Hilton. Tickets started at $250.

We found only one Republican unwilling to say they support or plan to vote for Trump: Lt. Gov. Carlos Lopez-Cantera.

"I support Marco Rubio," said Lopez-Cantera, when asked if he supports the GOP nominee. He did say he will not vote for Clinton, but declined to answer whether he will vote for Trump.

Gov. Rick Scott and Attorney General Pam Bondi, Trump's top supporters in Florida, did not attend. Nor did CFO Jeff Atwater. Agriculture Commissioner Adam Putnam introduced Pence, with whom he served in the U.S. House.

Rubio to join Pence at GOP dinner in Tampa

The Republican Party of Florida announced Tuesday that Marco Rubio will speak at a dinner next month in Tampa. Rubio is the second big name on the program, after vice presidential nominee Mike Pence.

Rubio, who is running for reelection to the U.S. Senate, has not campaigned with Pence or Donald Trump.

The Republican Party of Florida and Americans for Prosperity -- a conservative political group funded by the Koch brothers -- have both sent out mailers in recent days urging Florida voters to oppose Democratic U.S. Senate candidate Patrick Murphy in the November election.

In its mail piece, RPOF highlights the abortion positions for both Murphy and Republican incumbent Sen. Marco Rubio. The mailer accuses Murphy of having an "extreme" record, while Rubio is "on the right side of life." 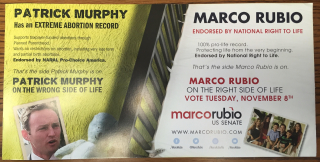 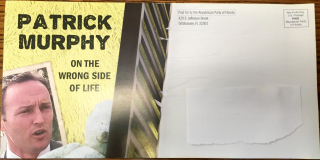 Murphy spokeswoman Galia Slayen defended Murphy's position on abortion in a written statement, noting that "Marco Rubio opposes abortion even in cases of rape and incest, and even if a mother has contracted the Zika virus."

"Patrick knows that this decision should always be between a woman, her family, her faith, and her doctor and it is Marco Rubio's extreme position that hurts Florida families," Slayen said. 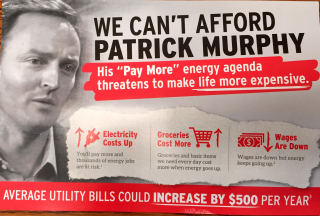 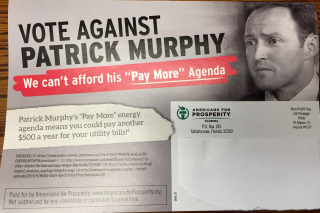 "Marco Rubio has been too busy doing the bidding of the Koch brothers to care," Slayen said in a statement. "Of course, the Kochs and special interests are spending big to prop up their favorite senator, who is committed to their dirty energy agenda. Unlike Patrick, who will always fight to protect our environment, Marco Rubio won’t even acknowledge that the threat of climate change exists."

The mailer is part of a nationally coordinated effort by AFP -- which is funded by billionaire brothers Charles and David Koch -- to attack Murphy's campaign, as well as Democratic candidates in other competitive U.S. Senate races.

Disclosure reports to the Federal Election Commission show AFP spent $121,500 on this anti-Murphy mailer. AFP also reported $113,000 in additional expenses so far in September against Murphy's campaign to pay for other mailers, phone banks, canvassing and staff salaries.

Both the AFP and RPOF mailers were sent to homes of Tallahassee voters who are registered as "no-party affiliation." The AFP's mailer was also received by a voter in Miami-Dade County. 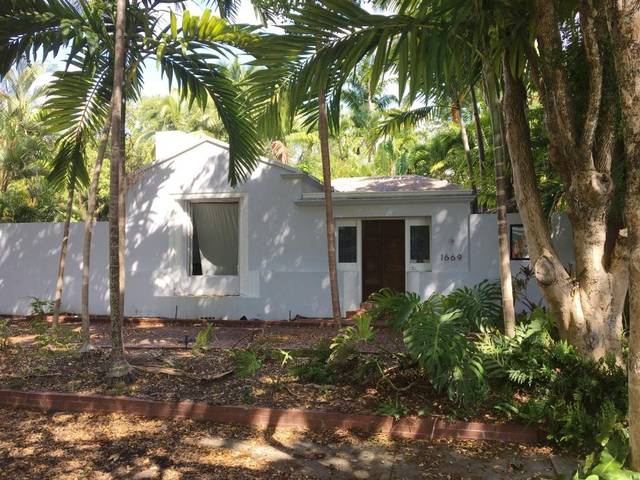 The national media descended Friday upon an abandoned, trash-filled home in Coconut Grove.

The reporters weren’t there because the house on the peacock-lined street was the scene of a notorious crime. Or because there was an inkling that LeBron James had returned to the neighborhood he once called home.

The house was the address where Donald Trump’s new campaign chief, Stephen Bannon, was registered to vote from 2014 until this week.

He doesn’t live there, at least not now. The discovery of his voter registration, made Friday by the Guardian US news website, prompted a frenzy of questions about whether Bannon had run afoul of voter rules.

But county elections records show Bannon never voted in Miami. And he switched his voter registration Thursday to a Sarasota County property owned by a writer of Breitbart News, the conservative network Bannon ran until last week.

Sarasota records show Bannon sent his registration change by mail on Aug. 19, and the paperwork was formally processed on Thursday.

It is unclear whether Bannon ever lived in the rental Miami home, where a white curtain flapped in the breeze in the place of a large window Friday morning. The front of the house was littered with trash. A small mural in front read, “I trust in Jesus Christ.” A call to the landlord for comment was not returned.

Read more here: Trump campaign chief was once registered to vote in Miami--but never did

Allies of Marco Rubio will head up a Florida Leadership Victory Committee designed to get out the vote in November.

Rubio is not mentioned in a release but he will raise money for the committee, which will in turn help his campaign and other down-ballot Republicans. The committee comes as Donald Trump is still organizing a ground game in Florida, creating some worry.

“It has always been our objective that Republicans up and down the ballot have success come November," RPOF Chairman Blaise Ingoglia said. "As a battleground state, the Republican Party of Florida is spending its time and resources supporting candidates that stand for conservative principles that will reverse the course of President Obama’s failed agenda.  For the Sunshine State, this election is about keeping Hillary Clinton out of the oval office by delivering Florida's 29 electoral votes to the Republican nominee and restoring prosperity to our country."

Posted by Patricia Mazzei at 2:27 AM in 2016 Election, Marco Rubio, Republican Party of Florida | Permalink | Comments 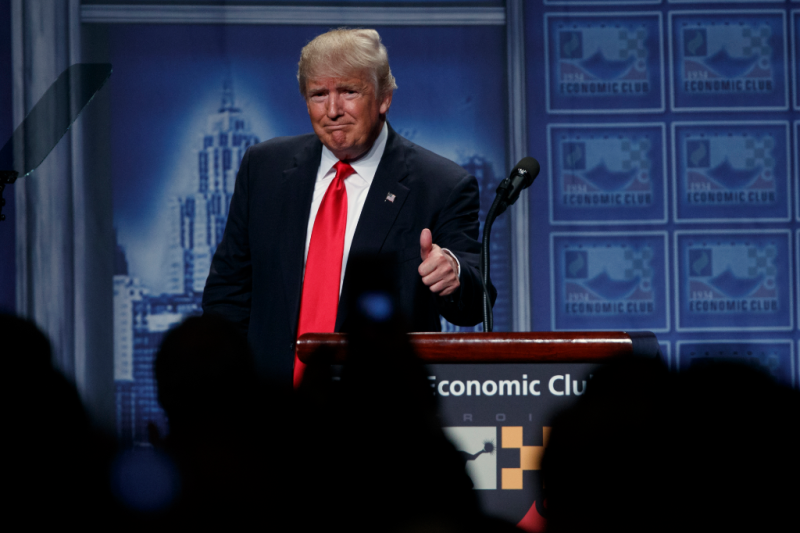 Donald Trump has claimed a casualty at the Republican Party of Florida: its communications chief, who is Hispanic.

Wadi Gaitan, whose parents are Honduran, is said to have had too many differences with his political party's presidential nominee to continue defending him to the press.

Gaitan himself wouldn't publicly blame Trump for his departure, though other Hispanic Republicans -- some of them who have or still work in Florida -- did so privately.

"I'm thankful for my almost two years with the Florida GOP, however, moving on gives me a great, new opportunity to continue promoting free market solutions while avoiding efforts that support Donald Trump," Gaitan said in a statement.

His resignation was first reported by BuzzFeed.

Gaitan is headed back to Washington D.C. to work for the LIBRE Initiative, a conservative Hispanic group backed by the industrialist brothers Charles and David Koch. Neither LIBRE nor the Kochs have backed Trump.

The Republican Party of Florida will open a Miami campaign office Saturday, featuring an appearance by U.S. Sen. Marco Rubio.

The field office, at 7032 Coral Way, is one of several the party plans to inaugurate in coming days, starting with an event Friday in Panama City -- also with Rubio, who is running for re-election.

Privately, some Republicans have grumbled that a rift between the Florida GOP and Gov. Rick Scott -- who's got his own, separate political apparatus -- might hurt get-out-the-vote efforts, particularly without a robust Donald Trump presidential campaign in place.

"I'm very excited for an RPOF Victory Office right in my backyard," Rubio said in a statement. "Miami volunteers will have a central location to work hard for candidates up and down the ballot here in Florida as we all work to ensure conservative wins across the state in 2016."

"Our new Victory Office in Miami will empower our volunteers and grassroots leaders with a location to continue registering voters, training new volunteers, and spreading our message of greater economic opportunity for all Floridians," RPOF Chairman Blaise Ingoglia said in the statement. "Together, we will ensure Republicans are successful in November."

CLEVELAND -- The Florida delegation will start the last day of the Republican National Convention with a high-powered breakfast.

The downside? The breakfast has now been moved up to 7:15 a.m. -- an early hour for delegates (and reporters) who will inevitably be bleary-eyed from the night before.

Scott is expected to address the full convention Wednesday night.

FBI Director James Comey on Tuesday called Hillary Clinton "extremely careless" in her use of private email while Secretary of State, but recommended no charges against her. That prompted backlash from Florida Republicans. Comey, it's worth mentioning, is a Republican.

The FBI concluded what many Americans have known for quite some time, which is that Hillary Clinton’s conduct as Secretary of State and her mishandling of classified information was disgraceful and unbecoming of someone who aspires to the presidency. There is simply no excuse for Hillary Clinton's decision to set up a home-cooked email system which left sensitive and classified national security information vulnerable to theft and exploitation by America’s enemies. Her actions were grossly negligent, damaged national security and put lives at risk.

Hillary Clinton's actions have sent the worst message to the millions of hard-working federal employees who hold security clearances and are expected to go to great lengths to secure sensitive government information and abide by the rules. They don't take their oaths lightly, and we shouldn't expect any less of their leaders.

Hillary Clinton’s reckless and thoughtless mishandling of classified information is not the end of the story however. It’s only a matter of time before the next shoe drops and the nexus of corruption and controversy that has surrounded Hillary Clinton throughout her time in public office produces yet another scandal for the American people to endure. Given the consequential and challenging times in which we live, America simply cannot afford any more Clinton drama.