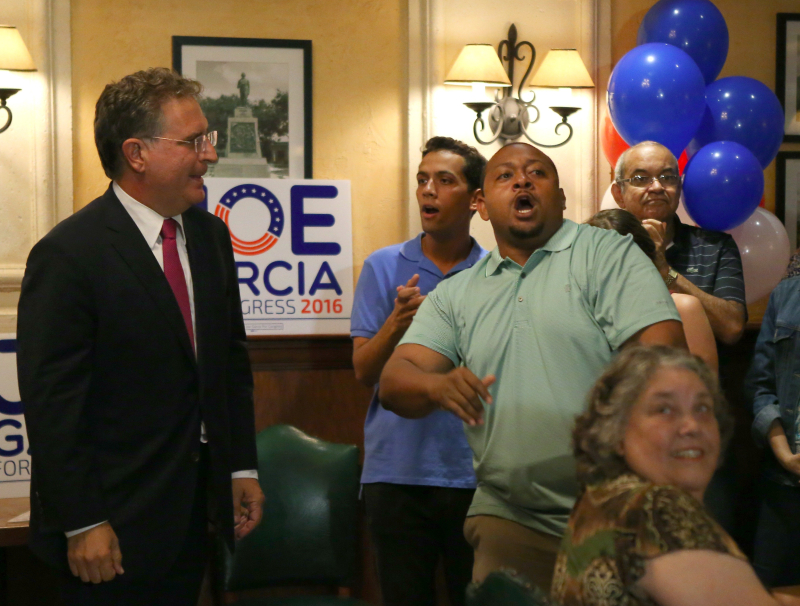 Rep. Alcee Hastings is bringing a group of fellow African-American members of Congress to South Florida for a two-day push to help Hillary Clinton defeat Donald Trump in the key battleground state.

Hastings, a 12th-term congressman from Miramar, will be joined by Reps. Charlie Rangel and Hakeem Jeffries of New York, and by Sheila Jackson Lee and Al Green of Texas in a swing through Broward County.

Almost 30 percent of Broward residents are black, forming one of the state's largest African-American voting blocs and a hub of a critical demographic group for Clinton to win the nation's biggest swing state in the Nov. 8 presidential election.

"With the rhetoric that we've heard from the Republican ticket, there can be little doubt how dangerous a Trump presidency would be for our country," Hastings told the Miami Herald. "We are here, first and foremost, to rally the African-American community in South Florida to elect Hillary Clinton as president and Patrick Murphy as our next United States senator."

Murphy, a Democratic congressman from Jupiter, is running against Republican Sen. Marco Rubio of Miami.

The congressional group's first stop was slated to be tonight at 7 p.m. to address a meeting of the Haitian American Democratic Club at Diecke Auditorium in Plantation.

Hastings and his Congressional Black Caucus colleagues had six events planned for Friday:

4 p.m., Canvas homes on foot in Sunrise neighborhood around the Clinton campaign office. 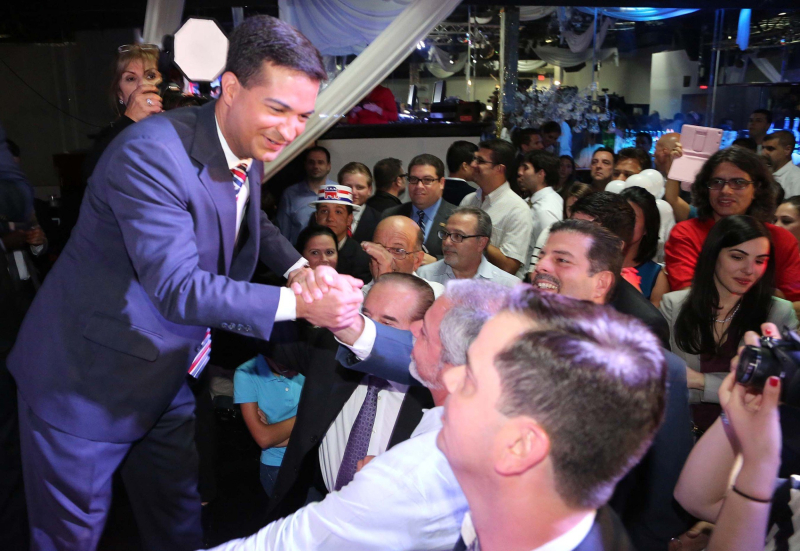 Naked Politics comes to the end of the road 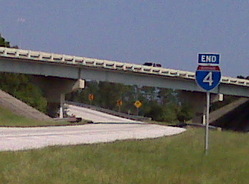 PORT ORANGE -- After three days on the road talking to voters, Naked Politics reached the end of Interstate-4 and made one more stop.

Patty Tropea, 47, is the manager of a waterfront pavilion used for weddings and other events in this coastal town. She's a Republican who hasn't made up her mind about the presidential race. But she is certain about one thing: her anger about the federal government's management of the economy.

"I've paid my bills. I didn't go out for lavish dinners or take expensive vacations, and now I have to pay for what other people have done?'' demanded Tropea. "I would like to see one of the candidates prove to the American people that they can stabilize the economy."

CASSELBERRY -- Naked Politics' tour of Interstate-4 included a stop in this middle-to-upper income Orlando suburb, outside a public library.

Stay-at-home mom Nichole Garcia and her three-year-old were late for storytime but stopped for a few minutes to talk about the presidential election. She and her husband are Army veterans who strongly believe in the war in Iraq.

"I believe if we just pulled out our troops, it would cause problems.'' Garcia said. "All the troops, all the deaths, would be in vain."

Garcia is also concerned about "pork-barrel spending" and said Republican John McCain will get it under control.

"All those crazy things they are using our tax money for,'' she said. "I believe he and Gov. Palin will shake things up."

What the kids are saying these days

ORLANDO -- Heading east across Interstate-4 in search of what makes this region tick, Naked Politics followed the footsteps laid yesterday by former President Bill Clinton. He campaigned here, at the University of Central Florida, on behalf of Democrat Barack Obama.

Lauren Korchek, 18, pictured below on the right, had to forego the Clinton rally for biology class. But she's already made up her mind to vote for Obama.

"I feel more confident that he would make a change,'' she said. "He puts a lot more faith in younger generations."

Her friend Casey Link, also 18, is still on the fence and may not even vote.

"My thoughts are really mixed up on the election,'' she said. "I want to vote but....I don't feel a strong pull." 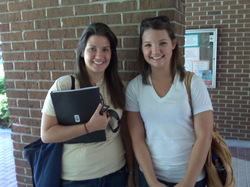 Posted by Beth Reinhard at 11:16 AM in Swing Voters | Permalink | Comments 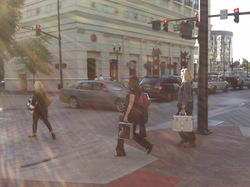 ORLANDO -- The stereotype of the latte-swilling Starbucks crowd is that they're all a bunch of over-educated, white guilt-riddden liberals. Not so. Naked Politics met about as many supporters of Republican John McCain on this downtown street corner as fans of Democrat Barack Obama, during another stop along the politically coveted Interstate-4 corridor.

"McCain is more conservative and more fiscally responsible,'' said Gino Butto, who works at the Orange County Clerk of Courts. "With Obama, I feel like I've seen so many different sides of him and I don't know who he is...I'm a moderate Republican, and he's too liberal and inconsistent."

Rob Frese, a 46-year-old CFO, said he doesn't buy the Democratic line of attack that  voting for McCain is voting for another eight years of President Bush.

Posted by Beth Reinhard at 9:33 AM in Swing Voters | Permalink | Comments

Forgetting about the economy with futbol

KISSIMMEE -- Naked Politics' road trip along Interstate-4 made a detour here, to one of the fastest growing Hispanic communities in the country, where a group of about two dozen men are playing soccer. For a few hours, they can forget about the mortgage being past due or the cost of gas. 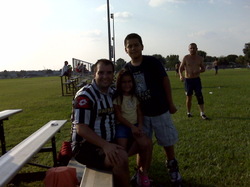 "We're trying to have a little fun, do something healthy, take the stress out,'' said Sebastian Busquets, 33, who is here with his 10-year-old son and 5-year-old daughter.

They lost their condominium nearly two years ago when the interest rate on the mortgage skyrocketed. Busquets works for AAA and picks up stranded drivers who often need to vent about their own money problems. He's voting for Democrat Barack Obama.

"He's something new. He's a change,'' Busquets said. "We can't afford another Republican like John McCain."

LAKELAND -- More than one out of five residents of this town between Tampa and Orlando are black. So it's not hard to find voters excited about Democrat Barack Obama, the first African-American presidential nominee.

"I'm so proud of him, even if he doesn't get to be the president,'' said Pat Moore, 52, who was born and raised here. "Times have certainly changed."

Like just about everybody, Moore's top concern is the economy. She was on her lunch break from work at Lakeland Regional Medical Center and had treated herself to a Filet-O-Fish combo from McDonald's. She usually brings lunch.

"It is indeed a treat,'' said Moore, adding that she struggles to pay her property taxes and mortgage payment. "Tomorrow is payday so I can splurge."